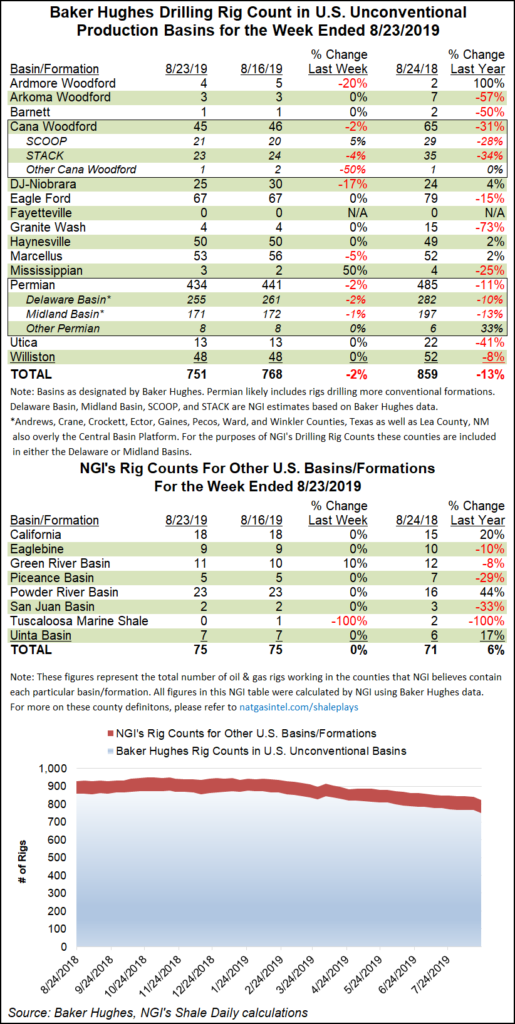 The U.S. rig count fell 19 rigs week/week to end at 916, including the departure of 16 oil-directed rigs and three natural gas-directed. The domestic drilling tally ended the week 128 units behind the year-ago count of 1,044, BHGE data show.

The week’s losses occurred on land, where 20 units packed up shop, offset partially by the addition of one rig in the Gulf of Mexico. One directional rig was added during the week, while 18 horizontal rigs and two vertical rigs exited the patch.

The Canadian rig count fell three units week/week to 139, with the loss of six oil-directed rigs offsetting the addition of three gas-directed. The overall Canadian count ended the week 90 units behind the 229 rigs running a year ago.

The combined North American rig count fell 22 units for the week to 1,055, down from 1,273 active in the year-ago period.

Among plays, the Permian Basin saw the sharpest decline for the week, as seven rigs packed up shop. The 434 active rigs in the West Texas/southeastern New Mexico play compares with 485 a year ago. The Denver Julesburg-Niobrara, meanwhile, saw five rigs depart, dropping its total to 25, versus 24 a year ago. The Marcellus Shale shed three rigs to fall to 53, versus 52 a year ago.

Also among plays, the Mississippian Lime added one rig, while the Ardmore Woodford and Cana Woodford each dropped one rig.

Among states, Pennsylvania saw the largest net decline for the week as six rigs packed up shop. Texas and Colorado each gave up four rigs, while three exited in Oklahoma. Alaska and New Mexico shed two rigs from their respective totals, while Louisiana dropped one.

Also among states, West Virginia picked up three rigs for the week, while Kansas added one, according to BHGE.

An escalation of the ongoing trade conflict between the Trump administration and China was roiling markets Friday, with the broader economic uncertainty knocking more than $1 off West Texas Intermediate October futures.

China announced it plans to impose tariffs beginning Sept. 1 on $75 billion worth of U.S. goods, including domestic oil, in response to rising taxes set to be imposed by the Trump administration.

The 5% and 10% tariffs, set to take effect in September and mid-December, follow President Trump’s recent edict to tax another $300 billion of Chinese goods. The U.S. tariffs are to take effect on the same dates as the Chinese taxes.

Despite the pullback in demand since the start of the year, “China is still an important customer, and while this 5% tariff won’t have a big impact on other countries’ demand for U.S. crude, it’s clearly not a good headline for oil markets,” Barrett said.