When the third set of locks at the Panama Canal opens for business Sunday, it will mark the historic widening of the canal and improve the economics of shipping petroleum and other products. U.S. propane exports will see the greatest benefit, at least for now, according to the U.S. Energy Information Administration (EIA). 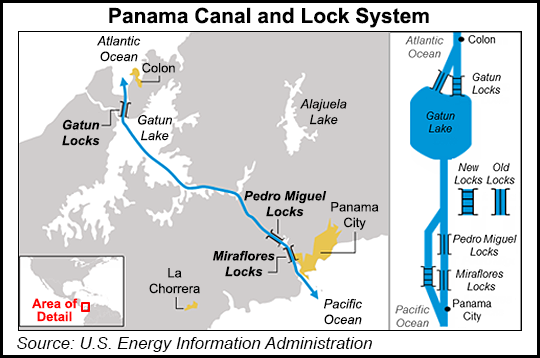 “With the exception of U.S. propane exports, the expansion of the Panama Canal is not likely to drastically affect crude oil and petroleum product flows,” EIA said Thursday. It is the first significant expansion since the canal was completed in 1914.

The more than $5 billion expansion involved deepening and widening portions of the canal and constructing an additional and larger set of locks. Unlike the old lock system, which has two lanes of side-by-side traffic, the new locks are one large lane and allow four transits per day, supplementing the 25 daily transits using the older lock system, according to EIA.

Last Monday, canal authorities conducted a successful trial transit in the expanded canal. The transiting vessel, a U.S.-built crane ship named Oceanus, was maneuvered through the Pacific-facing Cocoli Locks. Inauguration of the expanded canal is scheduled for Sunday and will see the first commercial transit of container vessel COSCO Shipping Panama.

The Neopanamax vessel set sail from the Greek port of Piraeus earlier this month, according to the Panama Canal Authority. During the inauguration, COSCO Shipping Panama will transit Agua Clara Locks on the Atlantic side during the early morning and Cocoli Locks in the afternoon. The regular schedule of transits through the expanded canal is to follow on Monday.

Previously, the size limitations of the canal created logistical bottlenecks for U.S. propane exports to reach markets in Asia, making ship-to-ship transfers necessary in order to move propane cargos. “The new, larger Panama Canal locks will allow most Very Large Gas Carriers, the type of ship that carries propane and other hydrocarbon gas liquids, to transit, likely reducing or even ending the practice of ship-to-ship transfers,” EIA said.