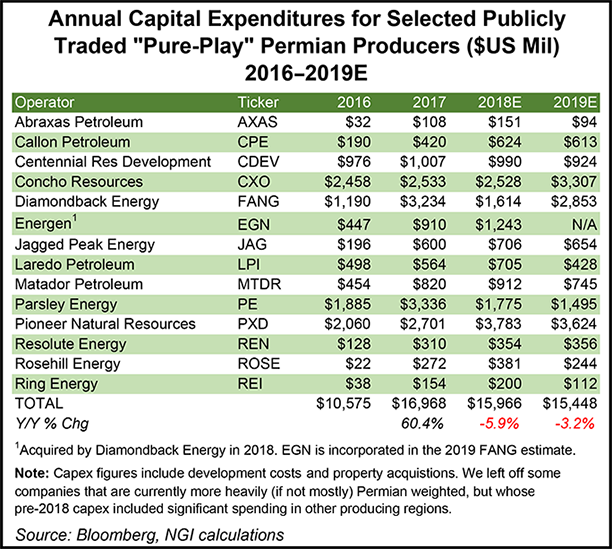 Tulsa-based Laredo unveiled a $365 million capital expenditure (capex) program for 2019, which includes $300 million for drilling and completion (D&C) costs and $65 million for production facilities, land and other capitalized costs. Laredo’s 2018 capex budget originally was for $555 million, including $470 million for D&C costs. It actually spend $575 million on exploration and production activities last year.

“A substantial portion of our completions will occur in the first half of 2019,” CFO Richard Buterbaugh said during a quarterly earnings call Thursday. “Consequently, we do expect to incur an outspend in the first quarter. We then anticipate to be approximately cash flow neutral in the second quarter, and then generate enough free cash flow in the second half of 2019 to balance spending and cash flow for the full year.”

With West Texas Intermediate (WTI) strip prices expected to hover at or near $54/bbl and a Henry Hub strip price of $2.90/Mcf, Laredo kicked off 2019 with three rigs and two completion crews deployed in the first quarter. However, one rig each is scheduled to be dropped in the second and third quarters to finish the year with one rig. Depending on where WTI prices are, Laredo could deploy from zero to 1.5 completions crews during the last nine months 2019.

“Slowing operations in 2019 is expected to produce both short- and long-term advantages for the company,” said CEO Randy Foutch. “Mainly, we anticipate that we will operate within cash flow…Additionally, we believe slowing development will begin to moderate both our oil and total production corporate decline rates ultimately reducing our maintenance capital levels.”

Total production of 74,000 boe/d is expected in 1Q2019, including 27,500 b/d of oil. Through March,, Laredo expects to complete 14.8 net horizontal wells, all of which were developed under its previous, tight-spacing plan, with an average completed lateral lengths of about 11,300 feet. An additional five tightly spaced wells are expected to be completed in early 2Q2019. Laredo plans to begin completing wells developed under the wider-spaced plan in the later part of 2Q2019.

The company continued to set records for drilling efficiency in the fourth quarter, drilling 18 gross horizontal wells with an average lateral length of about 10,100 feet. Laredo averaged 8.3 drilling days per 10,000 feet in the final quarter. The improved efficiencies allowed the company to complete 74 gross (71.2 net) horizontal wells during the full-year 2018, exceeding original expectations for well completions by about 14%.