Koch Industries is actively trading U.S.-produced oil to Europe and Asia, and more Bakken production from North Dakota increasingly will become part of the export mix, an executive said Wednesday. 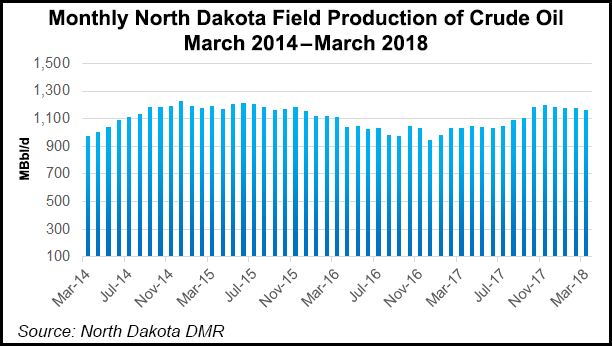 Koch Supply & Trading “participates in the export of Bakken crude and arbitrages Bakken to the rest of the world.” With Cushing Hub and Gulf Coast storage, as well as a fleet of 50 oil tankers, Koch has sold Bakken crude to overseas refineries, most recently to China, Cook said.

The Bakken, he added, is “an amazing story full of exceptional entrepreneurs in many functions, many of them sitting in this room today; and as the story continues incremental production will have to find its way to the water, where it can be exported to the international markets.”

He also detailed his analysis for the audience about how to benefit along the supply chain in exporting light, sweet Bakken crude. In contrast to the United States, where there hasn’t been a refinery constructed in 40 years, global refining capacity has increased rapidly in recent years, particularly in the Asian nations, he said.

Cook was on a panel that discussed where the Bakken is headed. Hess Corp. COO Greg Hill, whose company is a big Bakken producer, said the play was “leading the way on shale” globally and concluded that with demand rising, additional U.S. oil supplies “are needed more than ever.”

Crude oil exports, banned by Congress in the 1970s, seemed like a “no-brainer” to the industry, but it took some 200 meetings and support from producers across the country to convince federal lawmakers in 2015 that the ban should be lifted, Hamm said.

“In the end, we got it done. But it had to be attached to a large omnibus spending bill,” he added.

“People need to understand that we’ve been exporting a tremendous amount of refined products out of this country for a very long time,” Hamm said. “We’re talking 5-6 million b/d of refined products, and the only thing we couldn’t export was crude oil, which was silly. Today we’re exporting more than 2 million b/d, so that’s good. I think that number will grow as the U.S. sees more production. We’re expecting an added 800,000 to 1 million b/d addition.”