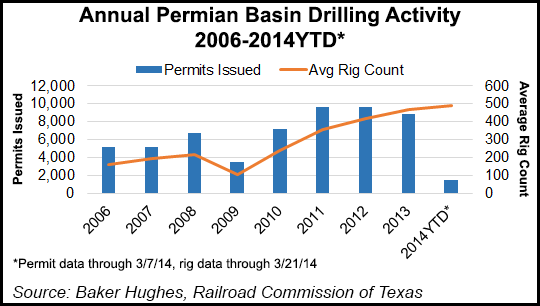 The Lobos Pipeline would transport CO2 from the company’s St. Johns source field in Apache County, AZ, to the Kinder Morgan-operated Cortez Pipeline in Torrance County, NM. Lobos would have an initial capacity of 300 MMcf/d and support EOR projects owned by Kinder Morgan and other operators in the Permian Basin of West Texas and eastern New Mexico.

The company plans to invest about $300 million in the pipeline and an additional $700 million to drill wells and build field gathering, treatment and compression facilities at the St. Johns field. The project is expected to be in service by the third quarter of 2016 pending receipt of environmental and regulatory approvals.

“This project will help address the market’s growing demand for CO2 and enable Permian Basin producers to increase oil production by using the product in EOR projects,” said James Wuerth, president of Kinder Morgan’s CO2 group. “EOR is measurably increasing the nation’s recoverable oil supply and will continue to do so in the future.”

Conventional drilling often leaves behind 75% of recoverable oil and gas. EOR has been used since the 1970s, when it was first employed in the Permian Basin where heavy oil, poor permeability and irregular fault lines meant the properties of the hydrocarbons would need to be changed. Water flooding and gas injection were used during secondary recovery to push oil through the well, but EOR essentially restores the formation’s pressure and increases the mobility of the reservoir when the gas mixes with the oil and decreases its viscosity, making it flow more easily.

According to the U.S. Energy Information Administration, crude oil production using CO2 for EOR “increases appreciably after about 2020,” which is when when oil prices are expected rise as output from the more profitable tight oil deposits begins declining and affordable anthropogenic sources of CO2 become available.