Kinder Morgan Inc. (KMI) turned in a loss for the third quarter — its first for the year — as it was dinged by a partial writedown of its interest in Midcontinent Express Pipeline (MEP) and expenses associated with the sale of a half-stake in the Southern Natural Gas (SNG) system. Lower commodity prices hurt the carbon dioxide (CO2) business. 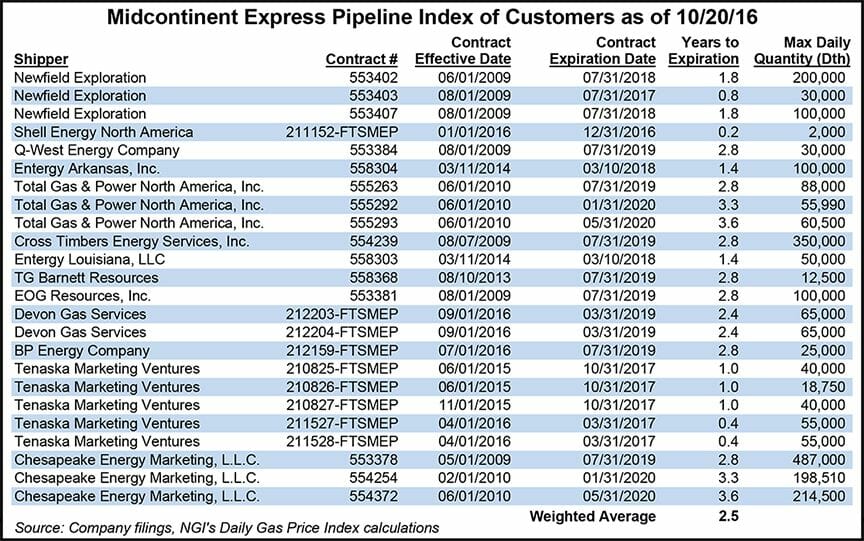 KMI reported a third quarter net loss of $227 million (minus 10 cents/share) compared to net income of $186 million (8 cents/share) for the third quarter of 2015, and distributable cash flow (DCF) of about $1.08 billion versus about $1.13 billion a year ago. The decrease in DCF came from lower contributions from the CO2 segment. CFO Kim Dang said during a conference call Wednesday afternoon that based on talks with shippers, KMI believes that as MEP contracts roll off the company will likely have to settle for lower rates.

Absent the sale of the 50% stake in SNG (see Daily GPI, July 11), performance of the natural gas business would have been comparable to a year ago, said CEO Steve Kean.

“The [natural gas] segment benefited from an increased contribution from Tennessee Gas Pipeline (TGP), driven by expansion projects placed into service during 2015, and increased contributions from both the Hiland midstream assets and the Texas Intrastate Natural Gas Pipelines,” Kean said. “These contributions were offset by declines attributable to reduced volumes affecting certain of our midstream gathering and processing assets, unfavorable contract renewals on Colorado Interstate Gas pipeline, and a customer contract buyout at Kinder Morgan Louisiana pipeline during 2015.”

Partially offsetting this, along with the TGP expansions, was higher throughput on Natural Gas Pipeline Company of America (NGPL) to serve Cheniere Energy Inc.’s Sabine Pass export facility as well as deliveries to South Texas for exports to Mexico. Demand in Florida lifted throughput on Citrus Pipeline.

However, gathered volumes were down by 17% from a year ago because of output declines in the Eagle Ford and lower volumes on the KinderHawk system.

“Over the last 2.8 years, KMI has entered into new and pending firm transport capacity commitments totaling 8.2 Bcf/d (1.9 Bcf/d of which is existing, previously unsold capacity),” the company said. “KMI expects future natural gas infrastructure opportunities will be driven by greater demand for gas-fired power generation across the country, liquefied natural gas (LNG) exports, exports to Mexico and continued industrial development, particularly in the petrochemical industry. In fact, natural gas deliveries on KMI pipelines to gas-fired power plants, to Mexico and to LNG facilities were up 9%, 6%, and approximately 346,000 Dth/d, respectively, compared to the third quarter of 2015.”

Kean said during the conference call that KMI stands to benefit from growing exports to Mexico even if other companies are building the pipelines to accommodate the growth. For instance, KMI delivers “a substantial amount of gas” to the NET Mexico Pipeline (see Daily GPI, Aug. 16).

During the third quarter, the KMI project backlog dropped to $13 billion from $13.5 billion at the end of the second quarter following the delivery of two tankers and completion of some projects.

“Most of our $4 billion of backlog projects in the gas sector are directed at those three market trends [power, LNG, Mexico exports], plus one more, and that is the reversal projects on our TGP system to move more Marcellus and Utica gas to the South,” Kean said.

“We continue to believe that the need for natural gas transportation storage capacity will grow as demand trends that I talked about continue and in the longer term the gathering volumes flatten and turn up when we ultimately see recovery in the gas supply basins that we serve.”

On Monday KMI’s Elba Liquefaction Co. LLC and Southern LNG Co. LLC received permission from the Federal Energy Regulatory Commission to begin initial site preparation activities for the export expansion of the Elba Island LNG Terminal near Savannah, GA (see Daily GPI, June 2) [CP14-103]. Kean said construction will start on the LNG export project at the beginning of November. The project could be self-funded or placed into a joint venture, Kean said.

Initial liquefaction units are expected to be placed in service in mid-2018, with final units coming online by early 2019. The project is supported by a 20-year contract with Shell.