With two major natural gas takeaway projects totaling 4 Bcf/d of capacity already in the works in the Permian Basin, Kinder Morgan Inc. (KMI) management on Wednesday indicated that a third transportation system out of the prolific play is being considered after the company reported volumes growth of 10% or more for the fifth quarter in a row. 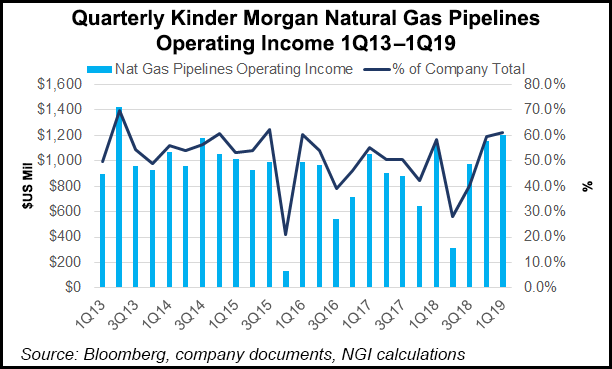 Rampant oil drilling in the Permian has led to robust associated gas supply growth in the basin, but a lack of adequate infrastructure to move those molecules to market has sent regional gas prices into uncharted territory. Spot prices at the Waha Hub dropped as low as minus $9 in early April and — despite returning to the positive side of ledger in recent days — are on track to average below zero for the month.

Some relief is expected once KMI brings online the two pipeline projects currently in the works, but the first of those is not expected until this fall, and the second a year later. When asked about the potential to build a third natural gas pipeline out of the region, the KMI chief said that while there is nothing to announce, there are some discussions ongoing.

“Demand to get out of the Permian continues to grow and the desire to unlock value that’s in oil and NGLs as well as in natural gas continues to put pressure on the need for additional takeaway capacity,” KMI CEO Steven Kean said on a call to discuss first quarter earnings. “And so the short answer is yes.”

Natural gas transport volumes were up 4.5 Bcf/d, or 14% compared to the first quarter of 2018, according to KMI. Much of the increase during the quarter was primarily driven by increased production in the Denver-Julesburg and Permian basins that benefited El Paso Natural Gas (EPNG), Wyoming Interstate Company and Colorado Interstate Gas Pipeline Company, as well as new projects placed into service on Tennessee Gas Pipeline (TGP) and Kinder Morgan Louisiana Pipeline (KMLP.)

Natural gas gathering volumes were up 21% from 1Q2018 due primarily to higher volumes on the KinderHawk and South Texas Midstream systems. Natural gas liquids (NGL) volumes, which are now being reported in the natural gas segment due to an internal reporting reorganization, were up 4% compared to 1Q2018.

“The transmission assets saw higher revenue on TGP due to contributions from projects placed into service in 2018, from EPNG due primarily to increased Permian-related activity and on KMLP due to the Sabine Pass Expansion that went into service in December 2018,” KMI President Kim Dang said. “The segment also benefited from continued growth on its gathering and processing assets in Louisiana and Texas due to increased drilling and production in the Haynesville and Eagle Ford basins, respectively.”

In the meantime, construction continues on KMI’s Gulf Coast Express Pipeline project, with management indicating that the remaining 40 miles of the 36-inch diameter Midland lateral were placed in service at the beginning of April. Construction is also progressing well on the 42-inch diameter mainline and compressor stations associated with the project, which remains on schedule for a full in-service date of October 2019.

The approximately $1.75 billion Gulf Coast Express is designed to transport about 2.0 Bcf/d of natural gas from the Permian Basin to Agua Dulce, TX, and is fully subscribed under long-term, binding agreements.

Work also continues on KMI’s Permian Highway Pipeline project. Civil and environmental surveys are substantially complete, and the land acquisition process is underway, according to management.

“Our execution and our economics of these projects both look good. And we’re actively managing our risks and opportunities on both,” Kean said.

In November, project partners, including EagleClaw Midstream, approved a roughly 0.1 Bcf/d expansion of Permian Highway capacity, which continues to be marketed. The $2 billion project is now designed to transport up to 2.1 Bcf/d of natural gas through about 430 miles of 42-inch diameter pipeline from the Waha Hub in West Texas to the U.S. Gulf Coast and Mexico markets. The original 2.0 Bcf/d of capacity is fully subscribed under long term binding agreements, and the pipeline is expected to be in service in October 2020.

In February, Natural Gas Pipeline Company of America LLC (NGPL) — partly owned by KMI — requested a certificate of public convenience and necessity from federal regulators to build a 500,000 Dth/d natural gas pipeline in the Permian that would connect directly to the Waha hub. NGPL proposes to provide long-term firm transportation service to two shippers: Lucid Energy Delaware LLC (460,000 Dth/d) and EOG Resources Inc. (40,000 Dth/d). The cost is estimated at about $51.6 million.

NGPL requested that FERC issue a certificate order by January 2020. The company plans to begin construction in March 2020 and expects to place the extension into service in 4Q2020.

NGPL is also proceeding with a second Gulf Coast southbound expansion project and made its Federal Energy Regulatory Commission filing on Feb. 28. The $230 million project would increase southbound capacity on NGPL’s Gulf Coast System by approximately 300,000 Dth/d to serve Corpus Christi Liquefaction, LLC. The project is supported by a long-term take-or-pay contract and is expected to be placed into service in the first half of 2021 pending appropriate regulatory approvals.

FERC gave affiliates of Kinder Morgan Inc. (KMI) permission to introduce feed gas, back-up fuel and boil-off gas at the facility in early March and authorized commissioning fuel and the introduction of hazardous fluids in February.

Also Wednesday, three KMI affiliates received a favorable final environmental impact statement from FERC for its proposed Gulf LNG export project. The Gulf LNG Liquefaction Project calls for expanding KMI facilities in Jackson County that would include two liquefaction trains, each with a capacity of 5 mmty and maximum capacity of more than 5.4 mmty. The draft EIS was issued last November.

As for Kinder Morgan Canada Limited (KML), management continues a strategic review of the company to determine a course of action that maximizes value for KML shareholders. Options under evaluation include, among others, continuing to operate as a standalone enterprise, a disposition by sale and a strategic combination with another company, according to management.

“This process involves a rigorous analysis of a variety of potential alternatives, and, while the complexity of the situation is requiring more time than we previously anticipated, the process is near its conclusion. We expect to complete the review and announce the outcome in the coming weeks,” KML CFO Dax Sanders said.

For full-year 2019, KMI expects dividends of $1.00/share, DCF of approximately $5.0 billion and earnings of about $7.8 billion, which is slightly below budget. The midstreamer plans to invest $3.1 billion in growth projects and contributions to joint ventures this year, and expects to use internally generated cash flow to fully fund its 2019 dividend payments, as well as the vast majority of its discretionary spending.

KML reported first quarter earnings of $21.3 million (12 cents/share), an increase of $7.3 million (5 cents) from 1Q2018. DCF was $22.4 million, down 5% compared to the comparable prior year period, which included $14.0 million increase in cash tax payments that were partially offset by greater contributions from both the Pipelines and Terminals segments versus the same period in 2018.