Kinder Morgan Inc. is aiming to convert four natural gas-to-power facilities in Michigan and Kentucky to renewable natural gas (RNG) after closing last week on the acquisition of North American Natural Resources (NANR) and its subsidiaries. 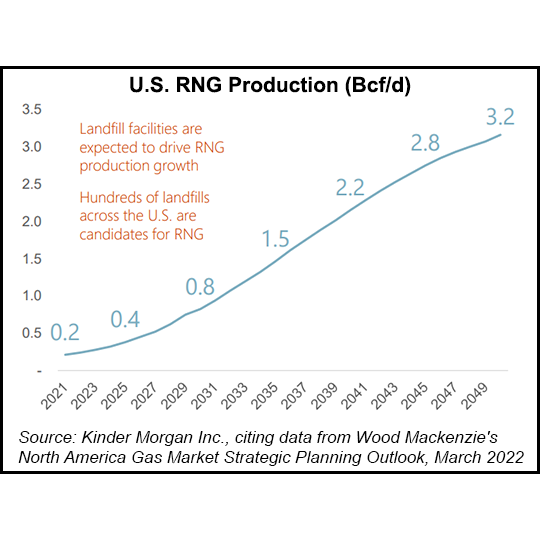 Kinder expects to make a final investment decision on the conversion to RNG of up to four of the seven gas-to-power facilities acquired in the $135 million deal. Capital spending for the conversions is expected to be around $175 million, with most of the spending going to construction of the plants as well as interconnection costs, according to Kinder’s Aaron Johnson, president of RNG.

He told NGI last week that the project, likely to begin service early in 2024, would generate 2 Bcf/year of RNG. Most of the supply is likely to be transported via interstate pipeline. Some could be contracted with an end-user or utility “depending on what the customer needs,” he said.

Three of the gas-to-power facilities would continue to produce electricity.

Kinder’s RNG offtake is 1.8 Bcf today, contracted with counterparties in the transportation market. The Houston midstream giant also generates renewable identification numbers, or RINs, that are sold to obligated parties, such as refiners. The midstreamer plans to mitigate its exposure to RIN volatility over time through fixed-price contracts as the voluntary market develops.

With the four NANR facilities, total RNG production capacity would reach 7.7 Bcf in 2024.

The NANR purchase builds Kinder’s stake in low carbon investments. During the second quarter earnings call with investors, CEO Steven Kean noted progress on recent acquisitions from Mas CanAm LLC, including an RNG project in Arlington, TX, as well as facilities in Shreveport, LA, and Victoria, TX. The Arlington facility is expected to produce 1.4 Bcf of RNG in 2023.

Meanwhile, construction continues in Indiana at the Twin Bridges, Prairie View and Liberty landfills, which are part of Kinetrex Energy’s RNG projects. Kinder acquired Indianapolis-based Kinetrex a year ago. The sites are scheduled to be in service late in 2022 and throughout 2023.

ETV President Anthony Ashley said the NANR acquisition “further positions us as a leader in the RNG marketplace.”

Tudor, Pickering, Holt & Co. (TPH) analysts said while run-rate RNG earnings remain “a drop in the bucket” relative to the Kinder’s total operations, “we view successful origination of accretive bolt-on acquisitions in the low-carbon arena as incrementally positive.” However, the TPH team expects more material investments to fall under the carbon capture, utilization and storage umbrella.