Undetected errors during construction and manufacturing led to the two largest spills in the history of TC Energy Corp.’s Keystone crude oil pipeline system in 2017 and 2019, according to a report by the Government Accountability Office (GAO). 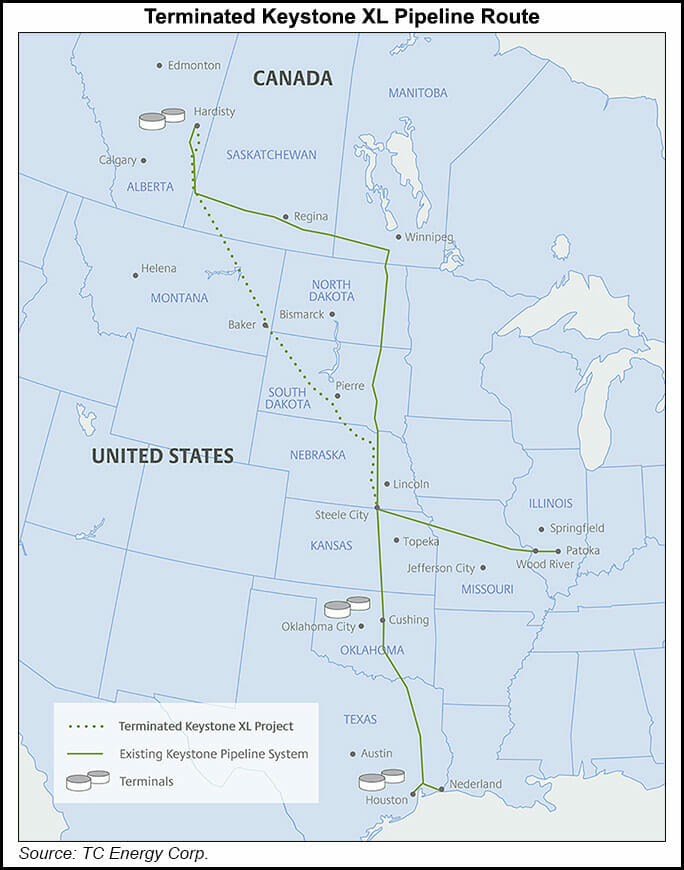 The 2,687-mile system has transported more than 3 billion bbl of oilsands crude from Canada to Gulf Coast refineries since it began operating in 2010.

Democratic Reps. Rep. Peter DeFazio (OR) and Frank Pallone Jr. (NJ) requested the GAO report in November 2019 in response to the two large spills, and amid heated debate over the Keystone XL pipeline, which has since been scrapped.

Keystone XL would have added up to 830,000 b/d of transport capacity to the Keystone system, which allows Canadian oilsands crude to reach refiners on the U.S. Gulf Coast.

TC canceled the controversial XL project in June after the Biden administration revoked the presidential permit issued in 2019. The recent GAO report covered the various issues in detail.

Between 2010 and 2020, Keystone’s accident history was similar to other oil pipelines over the same span, GAO said. Most spills released fewer than 50 bbl of oil and were contained on operator-owned property. However, the severity of spills on the system worsened in 2017 and 2019.

A November 2017 spill near Amherst in northeastern South Dakota released 6,592 bbl on land reserved for wildlife and public use, the GAO report noted. Citing information from TC and the Pipeline and Hazardous Materials Safety Administration (PHMSA), GAO said the accident was caused by a “fatigue crack, likely originating from mechanical damage to the pipe exterior by a vehicle during installation that grew to a critical size.”

An October 2019 accident near Edinburg, ND, released 4,515 bbl along the pipeline right-of-way, GAO said. In this case, analysis showed that the pipeline “was manufactured with an atypical seam weld geometry severe enough to initiate a fatigue crack.”

The two spills account for 93% of the total 11,975 bbl of oil released from Keystone since 2010, according to researchers.

DeFazio and Pallone chair the House committees on Transportation and Infrastructure and Energy and Commerce, respectively.

The report “validates President Biden’s decision to revoke the permit to build the Keystone XL pipeline,” DeFazio and Pallone said in a joint statement.

“In its thorough review of the pipeline’s history and construction, GAO found that preventable construction issues contributed to the current Keystone pipeline’s spills more frequently than industry-wide trends,” the legislators said. “President Biden was clearly right to question this operator’s ability to construct a safe and resilient pipeline, and we support his decision to put Americans’ health and environment above industry interests.”

Prior to the pipeline’s construction, TC was granted a waiver “to use pipe made of a higher grade steel than is normally allowed in order to operate some sections of the pipeline at a higher stress level than would otherwise be allowed under regulation,” GAO said.

“Since TC Energy was the first and remains the only hazardous liquid pipeline operator to request a waiver of this particular regulation, the Keystone special permit is unique.”

PHMSA granted the special permit on the condition that TC follow 51 conditions to offset the additional risk. However, PHMSA didn’t allow Keystone to operate at the higher stress level until 2017.

In response to the four largest spills from 2010-2020, PHMSA ordered TC to investigate the causes and take necessary corrective actions. “These investigations found that the four accidents were caused by issues related to the original design, manufacturing of the pipe, or construction of the pipeline,” GAO said.

She added, “We…agree with the report’s acknowledgement that based on independent root cause failure analyses, neither of the significant historical incidents that occurred on the Keystone system were causally related to the operation of our system under the terms of the special permit issued by PHMSA.”

Kass said these actions have led to “a significant improvement in our safety performance, with zero high-impact incidents occurring in the past 18 months.”

The GAO team, meanwhile, said, “Based in part on its experience overseeing Keystone, PHMSA officials…are establishing a more formal process to document and track the compliance of all special permits, including Keystone’s permit.”