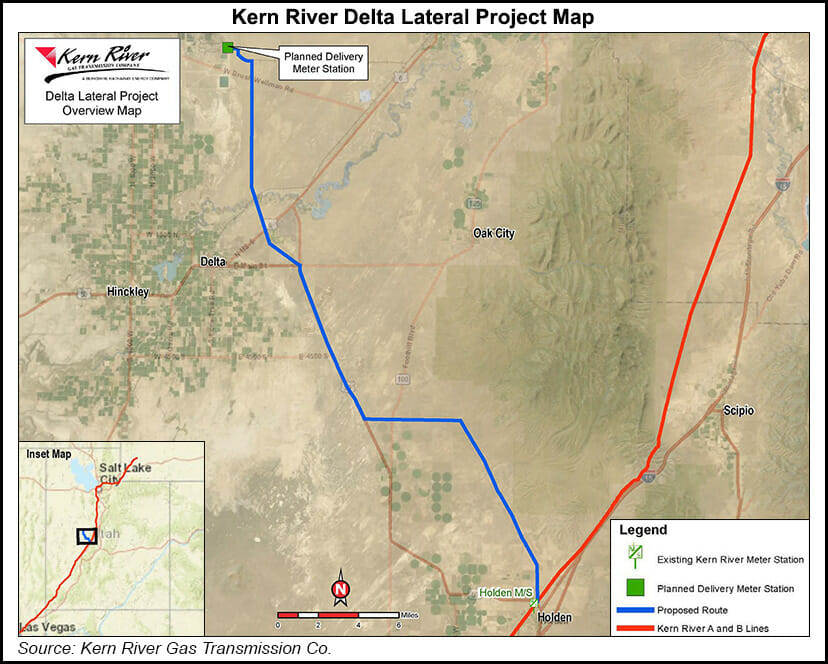 The draft environmental impact statement (DEIS), issued earlier this month by Federal Energy Regulatory Commission staff said approving the Delta Lateral Project would result in some adverse impacts. However, these impacts would be reduced to less-than-significant levels because of the minimization and mitigation measures proposed by Kern River and recommended by staff, according to the DEIS

FERC staff was “unable to determine the significance level of climate change impacts.”

In March, FERC for the first time incorporated a review of climate change impacts in the approval of Northern Natural Gas Co.’s request to build 87.3 miles of replacement line to upgrade its system in South Dakota and Nebraska.

On a broader level, the Commission in February initiated a notice of inquiry process to revisit its 1999 policy statement guiding its evaluation of the interstate natural gas infrastructure projects under its purview. Key regulators said that, as climate change concerns mount, a re-examination of how infrastructure proposals are approved is overdue.

IPP is undergoing a multi-year transformation that would result in retiring two coal-fired units at the site, It also plans to install 840 MW of gas-fired generating units capable of using hydrogen, and developing hydrogen production and long-term storage capabilities. The project, expected to be completed in 2026, also would modernize the power plant’s southern transmission system linking it to Southern California.

Once the facilities are completed, IPP would use renewable energy-powered electrolysis to split water into oxygen and hydrogen. Hydrogen would be stored in underground salt caverns to use as fuel for electricity-generating turbines. The new natural gas generating units are to be designed to use 30% hydrogen fuel at start-up, transitioning to 100% hydrogen fuel by 2045 as technology improves.

Kern River said the Delta Lateral would meet or exceed federal safety standards. It also is committed to “protecting the environment while meeting the demand for cleaner-burning natural gas.”

Kern River filed an application with FERC in April seeking a Certificate of Public Convenience and Necessity, requesting a decision by the end of March. The pipeline proposes to begin construction in March 2023, with in-service by May 2024.Comments on the DEIS are due by Dec. 27, and may be filed on the FERC website. Submissions also may be sent to Kimberly D. Bose, FERC Secretary, 888 First St. NE, Room 1A, Washington, DC 20426.