A day/day drop in the latest production numbers helped natural gas futures rally into the front month expiration Wednesday, although forecasts were mixed on the outlook for June heat. In the spot market, strong cooling demand in the Southeast kept prices there steady as the Midcontinent saw more negative trades; the NGI Spot Gas National Avg. climbed 11.5 cents to $2.060/MMBtu. 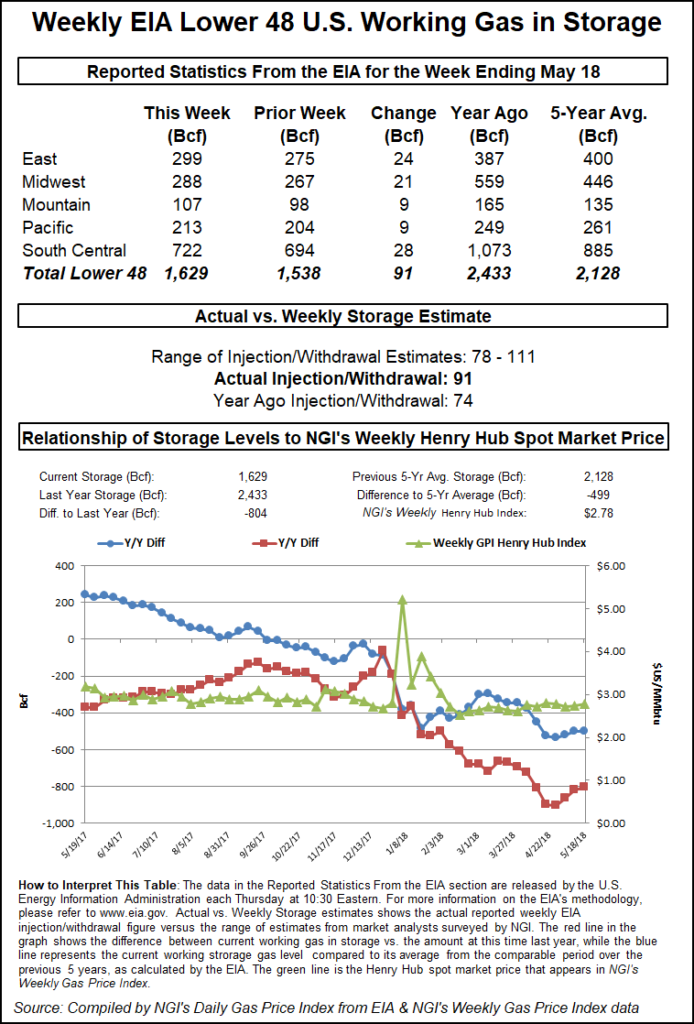 NatGasWeather pointed to stronger power burns and lower production, as opposed to hotter trends in the latest forecasts, to explain Wednesday’s rally. The midday Global Forecast System (GFS) data added a few Bcf in demand “but still wasn’t hot enough for the first half of June.

“The GFS maintained a little stronger demand for early next week due to hot high pressure pulsing stronger over Texas and the South,” the forecaster said. “However, the latest data continues to view a relatively bearish pattern June 6-11 as high pressure shifts over the Southwest. It would still be very warm across the central U.S. and the South/Texas with highs of 80s into 90s, just without extreme heat.”

Whether or not bulls can hold onto the recent gains could hinge on Thursday’s Energy Information Administration (EIA) storage report, according to NatGasWeather. Estimates ahead of this week’s EIA report were pointing to a near average build for the week ended May 24.

A Bloomberg survey as of Wednesday showed a median prediction of 98 Bcf, based on estimates ranging from 94 Bcf up to 104 Bcf. A Reuters survey called for a 101 Bcf injection based on a range from 91 Bcf to 110 Bcf. Intercontinental Exchange EIA Financial Weekly Index futures settled Tuesday at 98 Bcf, while NGI’s model predicted a 98 Bcf build.

Last year, EIA recorded a 95 Bcf injection for the period, and the five-year average is a 97 Bcf build.

On the supply side, Genscape Inc.’s latest Lower 48 production estimate Wednesday showed a nearly 1.7 Bcf/d drop day/day, driven by declines in the Rockies and in the East, although the firm noted that the data were subject to revision.

“The Rockies declines appear to be nearly evenly split among locations east and west of the Continental Divide,” Genscape senior natural gas analyst Rick Margolin said. “In the Denver-Julesburg, pipeline receipts across Weld County, CO, are down 285 MMcf/d, led by the Colorado Interstate Gas pipeline reporting a 194 MMcf/d day/day drop in receipts from the Lancaster plant. In the Green River, receipts from processing plants in Carbon and Sweetwater counties, WY, are collectively down more than 277 MMcf/d.”

Meanwhile, the declines in East production were focused in Northeast Pennsylvania, where Genscape observed a 0.33 Bcf/d drop day/day.

“Non-modeled pipeline nominations data is showing nearly 160 MMcf/d of lower receipts on Tennessee Gas Pipeline in Susquehanna County, along with 101 MMcf/d of declines on Stagecoach points in Bradford and Sullivan counties,” according to Margolin. “Southwest Pennsylvania production is down 0.25 Bcf/d, with about half of the declines occurring on Equitrans points in Washington County.

“West Virginia production is showing declines of more than 0.18 Bcf/d, primarily due to scheduled pigging operations on Columbia Gas affecting receipts out of the Sherwood and Majorsville complexes.”

From a technical standpoint, the market appears “nondirectional” and could be headed for more range-bound, sideways price action, according to Powerhouse President Elaine Levin.

“For the next few days, I think we just remain in this range from around $2.50 to $2.70,” Levin told NGI. “I always tell my hedgers to be patient, because things could change.”

The emergence of liquefied natural gas (LNG) exports adds new risks, with traders now having to account for more than “just weather and production,” she said. “Despite the fact that we have a range-bound market, the dynamics of the market are changing.” Adding overseas customers to the pool provides “another reason not to be complacent. We’ve got this cheap natural gas that people want.”

Hot temperatures in the Southeast and Mid-Atlantic will drive higher cooling degree day (CDD) levels over the next week, offset by declining weather-driven demand in other regions, according to Genscape.

“Lower 48 aggregate demand projects to be relatively flat as heat-driven gains in the South Central region get canceled out by declines in the East and Midwest,” Margolin said. “Genscape meteorologists are forecasting national, population-weighted CDDs will run a decent amount above normal through the end of the week and again by the middle of next week.

“However, the bulk of those CDDs are concentrated in the Southeast/Mid-Atlantic, where CDDs are forecast to run twice as high as normal for this time of year through Thursday. There are a few more days of slightly above normal temps forecast for the Northeast outside of New England, and normal temps forecast around Texas. Otherwise, most other regions are forecast to experience notably cooler than normal temperatures, with very large deviations in California, Desert Southwest and Rockies.”

The upcoming weather pattern had Genscape forecasting South Central region demand to climb from around 22 Bcf/d Wednesday to 24.2 Bcf/d by Tuesday, a possible high for the season so far. Total national demand, on the other hand, should drop from 70 Bcf/d Wednesday to as low as 62.8 Bcf/d over the weekend before rebounding to around 66 Bcf/d by Tuesday, according to the firm.

Elsewhere, NGPL Midcontinent continued to see negative trades Wednesday amid ongoing maintenance-related restrictions on the Natural Gas Pipeline Co. of America (NGPL) system. The NGPL restrictions include a force majeure, first announced last week, limiting northbound flows through the pipeline’s Compressor Station 194 in Ellsworth County, KS. That restriction is expected to last through Friday, according to the operator.

The NGPL maintenance has coincided with new record low prices at NGPL Midcontinent last week and in Tuesday’s trading. On Wednesday prices strengthened somewhat, barely climbing out of the negatives as the location added 68.5 cents to average 1.0 cent.

Meanwhile, West Texas prices have also shown signs of being impacted by the NGPL constraints. Waha continued to average in the negatives Wednesday, though prices there gained 88.5 cents day/day to finish at minus 80.0 cents.

The combination of limited pipeline takeaway and an associated gas glut continues to prove lethal to natural gas value in West Texas. This latest bout of widespread negative pricing, which began with last Friday’s trade date, coincided with an uptick in Permian production, according to Genscape analyst Joe Bernardi.