Driven by increasingly warmer weather outlooks that have since trended cooler for later this month, natural gas forward prices posted nearly 10-cent gains across the front of the curve for the June 20-26 period, according to NGI’s Forward Look. 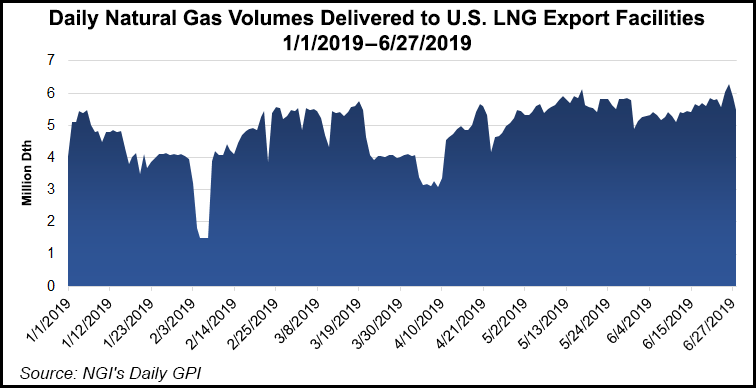 The gains largely mirrored those seen in the Nymex futures market, where the July contract shot up nearly 12 cents early in the week as weather models began to converge on the intensity and duration of a heat wave that has started to build in recent days. Prices shifted only slightly in both directions the next couple of days as rising production negated any further warmer trends in long-range outlooks.

Thursday’s weather data continued to trend slightly hotter, focused around the Fourth of July and into the long holiday weekend as all models further weakened the upper level trough sitting just off the East Coast, according to Bespoke Weather Services. The weakening would allow hotter weather to move into the East during that time frame.

“This increases the odds of more 90s into parts of the East late next week, similar to the next two to three days,” Bespoke chief meteorologist Brian Lovern said. “By July 10, models do strengthen ridging around Alaska into western Canada, typically a cooler signal, but the downstream trough is modeled to stay mostly up in eastern Canada, limiting U.S. cooling impacts.”

Indeed, after the weekend, weather data showed cooler air returning in the 11- to 15-day time period, although some data teases the possibility of ominous heat making another appearance around July 15.

The near-term heat is a welcome development for market bulls that took one to the gut during the June 17-21 week, when prompt-month prices fell to lows not seen in the last three years. Another sign of optimism occurred last Thursday when the Energy Information Administration (EIA) reported the tightest stat of the summer so far.

The EIA reported a 98 Bcf injection into storage inventories for the week ending June 21, snapping a string of 100 Bcf-plus builds that expanded the year/year surplus that reflected much more supply in the market than available data had shown. The reported injection was within the range of expectations, although consensus was a couple of Bcf higher.

The 98 Bcf build compared with last year’s 71 Bcf injection and the five-year 70 Bcf injection average, according to EIA. Nymex futures responded swiftly to the EIA report, gaining a few cents immediately as the print hit the screen.

The 98 Bcf injection was dead on with Bespoke’s projection. Balance wise, the build was the tightest the firm has seen “in a long time” and close to the five-year average balance.

“We will have to see if we can sustain this level of tightness, as we must remember a part of this number was the temporary decline of Canadian imports,” Lovern said.

There were no major surprises in the EIA data. A 35 Bcf injection was reported in the Midwest, and 27 Bcf was added in the East. The Pacific injected 11 Bcf, while stocks in the Mountain region rose by 9 Bcf. The South Central region reported an 18 Bcf injection, including a 1 Bcf withdrawal in salt facilities and an 18 Bcf build into nonsalts.

Some market observers on Enelyst, an energy chat room hosted by The Desk, said 100 Bcf-plus storage injections may be in the rearview mirror. However, larger-than-normal builds were likely to continue at a slower pace, especially with warmer weather ahead.

“If LNG doesn’t in fact back down soon (the biggest risk to our outlook), gas prices won’t stay sub-$2.30 for too long,” Fell said.

However, with the latest weather data showing a pullback in demand as early as the end of this week, not to mention lower LNG exports and weak power burns, traders sent the August contract down 4.1 cents to $2.267. September slipped 4 cents to $2.242.

Currently, two conflicting market drivers are at work, according to EBW Analytics. This week, as the July 4 holiday approaches, the market expects commercial and industrial demand to begin falling off rapidly, depressing cash prices. The market is likely to be mindful, however, that if current weather forecasts verify, power sector demand for natural gas could rise sharply after the holidays, strengthening the cash market and cutting weekly injections by more than 50% compared to recent levels.

“Faced with these competing factors, natural gas is unlikely to make a significant move either up or down prior to the holiday. After July 4, however, the stage could be set for gains of 10% or more during the first few weeks of July,” EBW said.

There were few standouts during the June 20-26 period, with the majority of pricing hubs closely following the lead of Nymex futures. July prices averaged 8 cents higher during that time, the balance of summer (July-October) rose 9 cents and the winter (November-March) climbed 8 cents, according to Forward Look.

California pricing hubs, however, moved against the pack as much cooler weather moved into the region, softening demand and dramatically lowering cash prices.

Rockies markets typically move in line with California, but this week was different as prices looked to the Nymex for direction. Northwest Sumas July prices rose a nickel from June 20-26 to reach $2.158, August tacked on a penny to hit $2.248, and the balance of summer climbed 5 cents to $2.03. The winter strip was up 7 cents to $3.09.

Some of the gains seen in the summer across the Rockies could also be due to below-average hydro output projected for the remainder of the season. In early June, the National Oceanic and Atmospheric Administration’s Northwest River Forecast Center (NWRFC) released its final Pacific Northwest water supply projection of 2019. The forecast through September, the end of the current water year, showed above-average water supply in the southern half of the Columbia River Basin and below-average supply in the northern half.

As of June 13, the NWRFC projected the Dalles Dam water supply forecast for April through September to be 85.2 million acre-feet, approximately 8% lower than the 30-year normal.

Across the border in Western Canada, prices were strong across the forward curve, but gains were less pronounced for the prompt month, according to Forward Look. NOVA/AECO C July rose a nickel from June 20-26 to reach 52.6 cents, while August jumped 9 cents to 88 cents and the balance of summer climbed 9 cents to 82 cents. The winter strip was up 11 cents to $1.54.

AECO cash basis has been showing some relative strength in recent days and when comparing this month versus last year. The province’s need to refill storage continues in an environment where record production volumes are being matched by record demand, according to Genscape.

Alberta storage inventory sits at about 131.5 Bcf, still more than 57 Bcf below last year’s same-date level and 86 Bcf below the five-year average.

Production through most of June averaged a record-high for the month of June at 11.3 Bcf/d, according to Genscape. However, demand also set June records, averaging 4.8 Bcf/d.

“The demand growth is primarily driven by structural changes from the province’s oil sands sector and gradual changes of fuel in the power stack,” Margolin said. “As a result, when there have been a few days of above-normal temperatures, some daily prints have come in above the 5 Bcf/d mark, something that has never happened in the month of June in provincial history.”

Meanwhile, exports came in at about 6.4 Bcf/d in June, which is only about 160 MMcf/d off last June’s pace as well as the prior three-years’ average, Genscape data show.