On July 1 Mexico will launch the pipeline capacity reservation contract model as the next step on its way to a fully competitive natural gas market. It promises to be a momentous one. 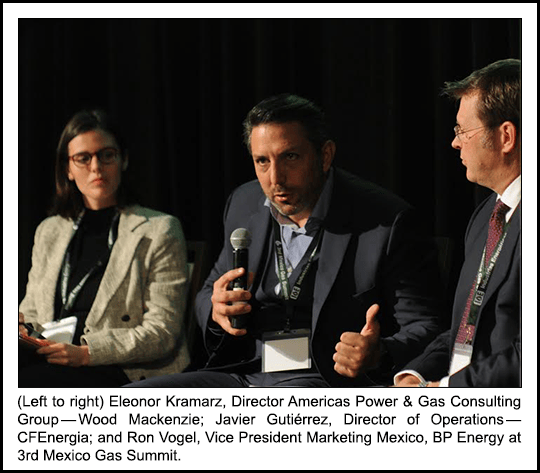 “Wow. We are scrambling because we have this [pipeline] capacity and we have contracts put in place. There will be hiccups on July 1, but it will be paper hiccups,” said BP Energy’s Ron Vogel, vice president of marketing, Mexico.

“Gas is going to flow. Everybody’s going to have gas at their meter. But it will be a learning curve for us; what information we get back, how timely it is. But we’ll figure it out. We’re good at that…July 1 is going to be pretty hectic for a lot of people…”

Speaking at the Third Mexico Gas Summit in San Antonio last week, Vogel said he came up with a list of about 25 items that will be new requirements and/or practices for domestic participants in the reformed Mexico gas market.

For instance, gas buyers — particularly the smaller ones — are going to get schooled in what Waha and the Houston Ship Channel are. They will learn — if they don’t know already — about nominations, contracting, swing gas and daily gas, taxes and import permits, among other things.

“There’s a huge learning curve for all the end-users,” Vogel said. Bigger players in the market have more experience. Now BP is talking with “the little guys,” he said. “…[T]hey just want the next year to learn and see how it works and get comfortable…They’ll learn it. And I think in the next year you’ll see something very different. You can’t expect it to change overnight.”

During the third quarter it is expected that first-hand sales price regulation for gas imported from the United States will be lifted. And next year the removal of the first-hand pricing formula is expected for gas that has been produced within Mexico.

“We need a completely deregulated market,” Vogel said. “It’s not going to happen overnight…You need to get rid of first-hand sales. You need to have the market be fully efficient and solve its problems. To make the market work, we’re going to need liquidity, transparency and more market players to have it completely working.”

Eventually, it is expected that gas traded in Mexico will no longer be priced exclusively off of U.S.-based indexes, such as those at Waha and the Houston Ship Channel. Mexico will get its own indexes, said Javier Gutierrez, director of operations for CFEnergia, an affiliate of state power generator CFE.

Gutierrez said it will take a few years before what looks like a fully formed competitive market emerges. CFE’s marketing and trading operation will be a major presence as the market evolves.

Increasingly, CFE is relying on gas-fired generating units as the role of coal and fuel oil is diminished for cost and environmental concerns. Currently, CFE requires 3.2 Bcf/d of imported natural gas. The power generator’s gas imports represent about 16% of daily Texas production, and they will continue to increase, Gutierrez said.

Additionally, CFE uses about 40,000 b/d of imported fuel oil and 7.3 million tons per year of coal. Diesel fuel imports could be required in the near future, he said.

The cost of fuel represents about 75% of CFE’s power generating costs. The net present value of a 20-year natural gas supply contract represents about four times the capital cost of a combined-cycle generating plant, Gutierrez said. “This means that inefficiencies in the acquisition of fuels can result in much higher costs than over-costs in the construction of generation plants.”

He said that until relatively recently, natural gas in the region had been moving north-to-south, from the United States to Mexico. The advent of liquefied natural gas (LNG) exports from the Gulf Coast with the startup of Cheniere Energy Inc.’s Sabine Pass terminal has shifted that flow a bit. Gutierrez said CFE is anticipating periods of gas shortage as exports of LNG from the Gulf Coast increase. That has been a worry.

To address this, next month CFE plans to release a request for offers to have natural gas delivered at Nueces under a long-term contract. “…[I]t can come from anywhere,” Gutierrez said. It’s going to be a long-term deal…We’ll pay for the gas at Nueces, and then by making it long term, you can absorb the cost of any infrastructure.”

With so much riding on natural gas — and fuel such a significant portion of the cost of generating power — security of supply is critical. One key to that is natural gas storage, something that Mexico has sorely lacked. It’s a problem some developers are working to address within the country.

“It’s huge,” Gutierrez said. “We need storage, either the U.S. or in Mexico for sure. We’ve been surviving on linepack…We really need storage.” While caverns/caves are pursued domestically, CFE will be looking for storage capacity north of the border, he said. One of the challenges is that as it stands now, the power market does not recognize the cost of storage capacity. CFE is working on figuring out how to have storage costs recognized in the price of power, he said.

While in recent months, LNG imported from the United States has taken up some of the slack in Mexico’s pipeline supply of gas, Gutierrez said one day LNG — being more expensive than pipeline gas — will be relegated to a supply security role, as in storage.

“The LNG is helping us now,” he said. “It’s going to help us until the infrastructure is all finished on the CFE side, and that’s going to take until 2018, 2019, give or take…I’m guessing that the price of LNG will just be beat…”

In Mexico’s Baja and Yucatan peninsulas, where pipeline infrastructure is less robust and could remain so, LNG could have a supply role, Gutierrez said. “Those are little islands, and they’re a little abandoned when it comes to infrastructure. If LNG is going to work there, I’m not sure,” he said.