A federal judge ruled late Tuesday that the Interior Department’s Bureau of Land Management (BLM) did an inadequate job of considering the effects of climate change when it authorized oil and gas lease sales in the West, and he ordered a temporary halt to drilling on more than 300,000 acres in Wyoming. 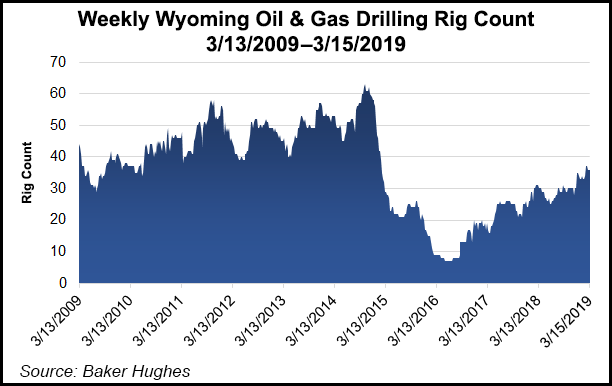 In the ruling, U.S. District Court for the District of Columbia Judge Rudolph Contreras, who was appointed by President Obama, said the BLM violated the National Environmental Policy Act (NEPA) because it “failed to take a ‘hard look’ at greenhouse gas emissions” for 303,000 acres offered in five lease sales between May 2015 and August 2016.

WildEarth Guardians and Physicians for Social Responsibility filed a lawsuit in August 2016 over BLM’s decision (WildEarth Guardians et al. v. Zinke et al., No. 16-1724). The groups claimed that issuing environmental assessments (EA) and findings of no significant impact (FONSI) for the Wyoming auctions was not enough and said environmental impact statements were needed. Contreras agreed with the plaintiffs’ assertion that the EAs and FONSIs were insufficient.

“BLM summarized the potential on-the-ground impacts of climate change in the state, the region and across the country,” Contreras wrote. “It failed, however, to provide the information necessary for the public and agency decision makers to understand the degree to which the leasing decisions at issue would contribute to those impacts. In short, BLM did not adequately quantify the climate change impacts of oil and gas leasing.”

Contreras remanded nine EAs and FONSIs associated with the Wyoming sales back to BLM to satisfy NEPA obligations, and enjoined BLM from issuing applications for permits to drill or authorizing any new drilling on the leases.

However, Contreras did not vacate the leases “in light of the serious possibility that BLM may be able to substantiate the conclusions drawn” in the EAs and FONSIs conducted by the agency.

“After BLM’s work on remand, plaintiffs may again address whether BLM fulfilled its NEPA obligations,” Contreras wrote. “The court will retain jurisdiction over this matter until those obligations are satisfied.”

The ruling could have wider implications for oil and gas drilling in the West. Court records show the plaintiffs have challenged BLM’s approval and issuance of 473 leases totaling more than 460,000 acres in Colorado, Utah and Wyoming. The leases were sold through 11 different lease sales.

The ruling could also impact the Trump administration’s “energy dominance” agenda, which includes support for robust domestic oil and gas drilling. WildEarth Guardians was critical of the Interior Department’s decision in January 2016 to initiate a multi-year process to study GHG emissions and climate impacts for its coal leasing program, but did not extend the study to BLM’s oil and gas leasing program.