Natural gas futures surged midweek as Old Man Winter appeared ready to ring in the new year. Even with the potential for cold weather to last a couple of weeks, though, the January Nymex futures contract expired 3.1 cents lower at $4.024/MMBtu. The incoming prompt-month February contract settled at $3.850, down 3.5 cents from Tuesday’s close. 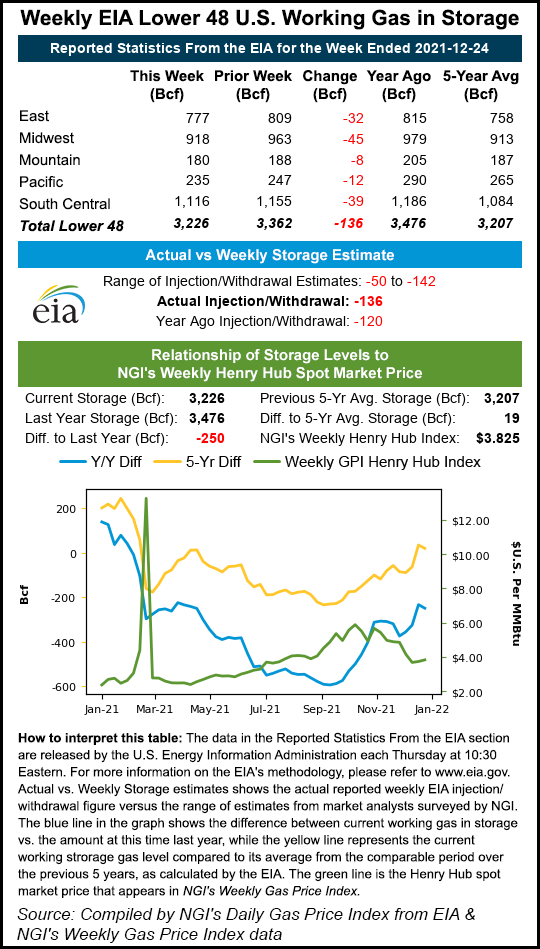 Spot gas, which traded Wednesday for gas delivery on Thursday and Friday, was lower across most of the country. NGI’s Spot Gas National Avg. tumbled 18.5 cents to $3.860.

After trending warmer in recent runs, weather models moved in the colder direction overnight and generally maintained the added demand in the 15-day outlook in the midday run. NatGasWeather said the Global Forecast System (GFS) reflected little change in the first seven days of the forecast, with a few more days of exceptionally mild temperatures and modest demand. However, the American model shifted even colder for the Jan. 6-11 period.

Weather forecasts continued to show frosty air in the Northern Plains sliding south across North Texas on Sunday and Monday before tracking eastward across the rest of the northern United States. NatGasWeather said overnight lows could fall below zero in some areas.

This is a sharp departure from the record high temperatures set in the Lone Star State this week. For example, temperatures Wednesday morning had already reached a balmy 75, which is a staggering 30 degrees above normal for late December. By Sunday, morning lows are forecast in the 30s.

The latest midday GFS showed a milder break starting next Tuesday through Jan. 7, according to NatGasWeather. However, it was quicker with the next cold shot arriving Jan. 7 instead of Jan. 8 to gain several heating degree days. Furthermore, there is enough cold air lingering across the northern United States Jan. 9-12 in the latest GFS to keep the back end of the 15-day forecast cold enough to satisfy.

“To our view, it’s important the Jan. 8-12 period hold strong demand across the northern U.S., or it could lead to disappointment,” NatGasWeather said. “Bulls were able to rally February 2022 prices over $4” on Wednesday morning, “before strong selling dropped prices back under it.”

With volatility continuing in the final days of the year, the next government inventory report also could cause a stir in the market. Market estimates ahead of the Energy Information Administration’s (EIA) weekly storage report, scheduled for 10:30 a.m. Thursday, were wide ranging, with no clear indication of how steep inventories may fall.

A Wall Street Journal survey of 11 analysts produced a range of withdrawal estimates from 66 Bcf to 128 Bcf, with an average draw of 114 Bcf. A Reuters poll had an even wider range, with a median pull of 126 Bcf. NGI modeled a 142 Bcf withdrawal.

For reference, the EIA recorded a 120 Bcf draw in the same week last year and the five-year average pull is 121 Bcf.

“It’s a tricky withdrawal to predict due to the Christmas Day holiday, where schools and businesses were closed,” NatGasWeather said.

Rystad Energy said although the latest forecasts point to widespread cold next month, supply risks are unlikely to be a factor. As a result, U.S. gas prices are expected to remain isolated from turbulence in Europe and experience only limited upward price movement through the first quarter of 2022, barring any unexpected cold snaps.

As for Europe, after a tumultuous week for Title Transfer Facility (TTF) prices, which rose to and then tumbled from all-time highs of nearly $60, the market is more balanced in the short term, according to Rystad. The stabilization is the result of liquefied natural gas (LNG) supplies of at least 0.8 million tons across 11 tankers being redirected from Asia and an upward revision to near-term temperature forecasts across Northwest Europe.

However, flows in the Germany-Poland section of the Yamal Europe pipeline were in reverse mode for a ninth straight day. This raised eyebrows as storage is clocking at only 55% capacity and may create some price support even in a bearish environment, according to Rystad.

“LNG diversions from Asia are a useful stop-gap measure but are not a sustainable substitute for stable pipeline supplies, considering LNG is a waterborne commodity and demand in Asia may yet see an uptick in January,” said Rystad senior analyst Kaushal Ramesh.

Further, given the low likelihood of Nord Stream 2’s approval in the first half of 2022, prolonged zero or reverse flow could accelerate storage withdrawals and may reflect higher restocking demand in the injection season for next year. This effectively flattens any potential backwardation in the TTF forward curve, Ramesh said.

Spot gas prices crumbled on Wednesday amid lackluster demand for the next few days, including Friday, New Year’s Eve. High pressure was seen ruling the southern and eastern United States in the coming days, with highs forecast in the 50s to 80s over vast stretches of the country.

Most prices in the country’s midsection were down less than 20.0 cents day/day, but benchmark Henry Hub cash churned out a 10.0-cent gain to average $3.400.

Meanwhile, Stingray Pipeline Co. this week extended an onshore maintenance event that began Nov. 16 on the 36-inch diameter mainline. Stingray originally expected the work to last for about six weeks, until Tuesday (Dec. 28). It now expects work to be completed by the second week of January. As a result, all gas and liquids production on Stingray remained shut-in.

Based on the previous end date and the 3,568 MMBtu/d 30-day average prior to the start of maintenance, the estimated total production shut-in was 153,445 MMBtu, according to Wood Mackenzie. With the extended end date, the total amount of production shut-in could reach up to 217,648 MMBtu, assuming an end date of Jan. 15.

“However, this assumed end date could be longer than Stingray actually anticipates since they expect the maintenance to be completed by the second week of January, which could range anywhere from Jan. 9-15,” Wood Mackenzie analyst Kara Ozgen said.