When the natural gas industry looks back on the winter of 2013-14, it will remember a number of extremes — the polar vortex, price spikes, a propane shortage, frozen wells shut in, very tight gas supplies and lingering concerns about replenishing gas storage. 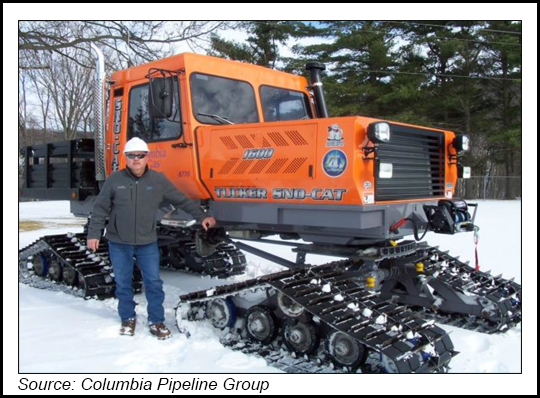 But in a winter season fraught with bad news, folks in Terra Alta, WV, will remember it as the time that Rick Winters — a pipeliner with nearly 27 years of service with NiSource’s Columbia Pipeline Group (CPG) — rescued a mother and her three small children from a car that was stuck in a snowdrift. First responders were unable to reach them, but Winters succeeded, piloting Columbia’s six-ton Tucker Sno-Cat.

“It was very cold,” Winters told NGI on Wednesday. “I think we had temperatures below zero, blizzard conditions. A lady and her three kids decided they were going to try to get home from her mother’s house.

“The terrain here, we’ve got some low valleys and then some high ridges. She tried going across this one area where the roadway is about six to eight feet lower than the field that it goes through. When the wind blows in there like that it just fills the road in solid.”

Winters said the woman tried to drive through the snowdrift but got stuck, unable to drive forward or backward. He said the woman had a cell phone, but her vehicle was nearly out of gas.

“It was very bad that night,” Clark Nicklow, public information director for the Preston County Office of Emergency Management, told NGI. “I remember that night well. It was snowing and drifting. It was probably one of the worst nights we had this winter. I can’t even explain how bad the snowdrifts were on that road.”

Nicklow said he received the first call about the stuck vehicle at 10:38 p.m. on Jan. 26. The car was stuck in a snowdrift more than five-feet high, about two miles outside of Terra Alta, and was running out of fuel with temperatures below minus 12 degrees and falling. Nicklow said first responders from the Terra Alta Volunteer Fire Department and the Preston County Sheriff’s Department were not able to reach the family.

“The fire department couldn’t access them, so they suggested that we call Columbia Gas because they had a [Tucker] Sno-Cat,” Nicklow said, adding that the company was contacted at 11:25 p.m. Shortly thereafter, Winters, whose regular job is maintenance of CPG’s Terra Alta storage field, fired up the Sno-Cat and went in search of the trapped family.

“I responded and came out to work here and got the machine,” Winters said. “I probably had to drive about five miles to get to her with the Sno-Cat. Once I got to her, I loaded them up and took them back to her mother’s house and told them to stay put.”

Winters said the family had driven about a mile and a half from the house before getting stuck.

“They were just in a bad situation,” Winters said. “It was near zero visibility at times. When it blows 30 or 40 miles an hour and it’s snowing like that, it’s something that everybody ought to see at least once in their life. But we see it all too often up here. It’s a common occurrence because of the conditions that we have here.

Nicklow said Winters had rescued the family by 12:39 a.m.

“He saved them from, at the very least, a long cold night,” Nicklow said. “But he could have potentially saved their lives. It got very cold that night and they were out there for hours. If it weren’t for Rick, I’m not sure how they would have gotten them out.”

The Tucker Sno-Cat is no ordinary ski slope powder pusher. Weighing six tons, it runs on four independently mounted sets of tracks. Modified versions of the machine are used for mountain top access, military operations and search and rescue. Sno-Cats have also been used extensively to explore the Arctic and Antarctic regions.

Nicklow said Terra Alta receives some of the highest annual snowfall totals in the state, generally receiving more than 200 inches of snow a year.

Nicklow added that CPG are good neighbors. “We are extremely happy that they’re here,” he said.

Winters said the decision to help the stranded family was “a no-brainer, [especially] when someone calls you and needs assistance, and you have a tool that is able to help them out.

“It’s a great feeling and it makes you feel good inside. I’m not going to sit back and read about it in the paper the next day. I’m going to make every effort to do what I need to do.”

CPG spokeswoman Katie Dupuis Martin told NGI that the company’s storage facility at Terra Alta is actually composed of two separate reservoirs in the Oriskany Sandstone formation. The reservoirs — Terra Alta and Terra Alta South — include 79 storage wells with an average depth of 5,600 feet and a shut in maximum well head (surface) pressure of 2,350 psig.

Martin said the storage facility has a Federal Energy Regulatory Commission certificated capacity of 52.6 Bcf, and can deliver approximately 280 MMcf/d on a design basis. The facility includes 5,500 hp, which is used for both injection and withdrawal primarily to serve East Coast markets.