Polls show Pennsylvania’s Republican Gov.Tom Corbett narrowing the double-digit lead that Democratic challenger Tom Wolf has enjoyed for much of the campaign. The election has high stakes for the oil and gas industry as Wolf has pushed a severance tax and made energy reform a mainstay of his campaign. 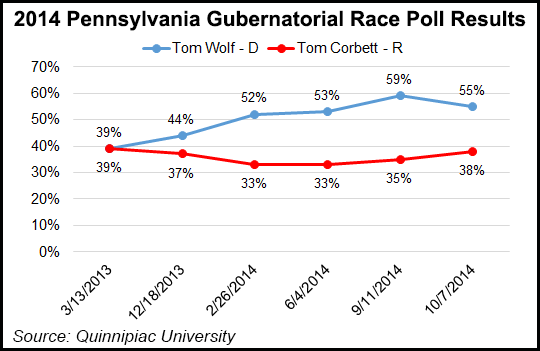 No matter who emerges as the state’s next governor, experts say, history will be made. Wolf has pinned his hopes on victory with a proposed 5% severance tax on oil and gas production in a state without one to filling its deep budget gap, which polls show voters have favored.

“There’s a hugely steep hill” for Corbett, said pollster Terry Madonna, director of the Center for Political and Public Affairs at Franklin & Marshall College in Lancaster, PA. “…[N]o matter what, history will be made on Tuesday,” he said. “No incumbent governor seeking re-election has lost since the state constitution was changed in 1968 allowing a second term.”

If Corbett does win, he’d be the first candidate since then to claw his way back from what has been a consistent 20-point deficit in the polls through September, Madonna added.

Still, a last-minute gain in the polls — and what experts believe will be a low turnout in the Democratic stronghold of Philadelphia — give Corbett a fighting chance, especially if the race narrows in the final days of the election.

“You see now where this is heading,” Madonna said. “[Corbett] is winning back Republicans on his argument that Wolf is a ”tax and spend liberal,’ and taxes are the second most important issue in this election.”

A poll by Franklin & Marshall College among 738 registered Pennsylvania voters, released Wednesday, found that Corbett’s job approval and hard re-elect numbers have steadily increased among registered Republicans during the fall campaign. But Wolf was holding a 13% lead over Corbett heading into the final days of the election on Tuesday. That poll also demonstrated how Wolf has dominated the airwaves and campaign trail with 60% of surveyed voters — despite their choice for governor — saying they believe Wolf will win.

Conservative polling firm Magellan Strategies also found in mid-October that Corbett trailed Wolf by just 7% after a survey of 1,131 likely voters in the state.

In the week before the election, both Corbett and Wolf have been barnstorming the state, competing for last-minute votes in nondescript and flashy events alike. Former President Bill Clinton was in Pittsburgh on Oct. 27 to campaign for Wolf, while President Barack Obama was expected to show support for him with a trip to the state on Sunday.

To Tax or Not to Tax?

Wolf, 65, a businessman from York County who once served as the state’s revenue secretary, wants to enact a 5% severance tax on natural gas extraction (see Shale Daily, May 21). He claims such a move would generate $1 billion in annual revenue, but he has provided few details about how that figure would be generated. The money, he says, could be used to fill a $1 billion void in state education spending that was left when federal stimulus dollars expired during Corbett’s first term, for which he has criticized the incumbent repeatedly during the campaign.

Corbett, 65, from southwest Pennsylvania, hasn’t completely ruled out a severance tax, but he has staunchly resisted it during his time in office. Instead, he has pushed state pension reform and privatization of the state’s liquor system as ways to plug a structural budget deficit that’s approaching $2 billion.

“There’s no doubt, and I’ve polled on a severance tax, that voters of this state support a shale tax. That issue is popular and Wolf has gained on it because he’s tied it to education, which is the most important issue in this election,” Madonna said. “He’s also talked about using that tax for four different things. If you remove the impact fee, that takes away $200 million [annually] from anything Wolf’s proposed. He has also not specified exactly how all that money would be spent.”

The Wolf campaign has said in recent days that voters are most interested in Wolf’s ideas about education, and it has dodged detailed questions about the severance tax, saying it’s focused for now on winning last-minute voters in the days before the elections, adding that polls mean little.

According to the Center for Energy Economics and Policy, 26 states levy a severance tax on natural gas. Some have a tax based on a percentage of the market value of the gas extracted, while others levy a tax based on a fixed dollar amount, and some use a hybrid system.

The state’s oil and gas industry, which is heavily involved in developing the Marcellus Shale, has expressed skepticism about how a tax rate on production would be calculated. What also remains unclear is if the state’s impact fee (see Shale Daily, Feb. 15, 2012), which charges a flat fee for all wells drilled in the state for distribution to local governments and state agencies, would be replaced or combined with a severance tax. The impact fee has generated more than $630 million since its inception in 2012 (see Shale Daily, April 4).

Marcellus Shale Coalition (MSC) President David Spigelmyer said natural gas in Pennsylvania has been selling on average at a $2 discount to the New York Mercantile Exchange price. The MSC has said Appalachian gas would have to fetch roughly $6/Mcf for a tax based on market value to generate $1 billion annually. The organization has also questioned where that tax money would go after it’s collected.

“It’s really clear that capital moves like water to a path of least resistance,” Spigelmyer said. “We want to make sure we get this economic opportunity and the jobs right going forward. We can’t do that by painting this picture of a panacea that shale gas taxation is going to fix our schools, our roads, our budget. It’s the wrong approach to say it’s going to fix all of our problems.”

Kathryn Klaber, principal of energy consulting firm The Klaber Group and former president of the MSC, said Wolf’s shale tax proposal is creating a degree of uncertainty for operators in the state. She added that there is no “universal answer” for what a severance tax might mean for Pennsylvania because “some companies would be hit harder than others in their operations and growth curve. It’s also a matter, she said, of what other alternatives each company has to deploy capital.

“To me in general, a tax does not equal a sound policy framework. I think we have to get beyond this stump speech that a new tax is going to bring all sorts of solutions and get to a point where the realities of what that tax will mean become more clear,” Klaber said. “Unfortunately, the election rhetoric around this issue has bastardized it in the public mind without any apples-to-apples comparison and no honest assessment of what would happen.”

Klaber said there’s a significant capital recovery period under a severance tax that could potentially allow for a number of years to pass before any tax bill comes due. She said such a reality is also creating uncertainty for the state’s municipalities that rely on a chunk of impact fee revenue each year for their budgets.

Twenty-seven municipalities in southwest Pennsylvania recently passed resolutions opposing anything that would change the structure of the impact fee. In September, those resolutions were approved for delivery to the Pennsylvania State Association of Township Supervisors, which represents hundreds of townships across the state.

Madonna said Wolf hasn’t needed to take risks with specifics about many of his policy proposals, especially with the lead he’s enjoyed during much of the campaign. It wasn’t until recently, Madonna said, that a “sharper, more aggressive Corbett” emerged, winning all three debates late in the campaign.

“I didn’t really see it from Corbett until September,” Madonna said of Corbett’s recent campaign appearances. “Be that as it may, I think that’s helped him, particularly with Republican voters who thought he was drifting. Now it’s a different campaign.”

To be sure, energy and environmental issues have played an outsized role in elections across the country, from the U.S. Senate to gubernatorial races and in state house competitions. Midterm ballots across the country could serve as referendum of sorts on the oil and gas industry alone, with hot-button issues like a statewide fracking task force playing prominently in Colorado’s gubernatorial race, a proposed fracking ban in Denton, TX, and three counties in California that have similar issues on their ballots (see Shale Daily, Sept. 9; July 16; May 7).

In Ohio, Republican incumbent Gov. John Kasich, who has a strong lead in the polls, supports a 2.75% shale tax, compared to his democratic challenger Ed Fitzgerald, who opposes one, claiming it could stifle energy growth in the state’s Utica Shale (see Shale Daily, May 15).

But nowhere does the issue seem more important than in Pennsylvania, where the Marcellus Shale has risen to the seat of the nation’s largest gas field as production is poised to surpass 16 Bcf/d next month, according to the U.S. Energy Information Administration (seeShale Daily, Sept. 19).

That’s why it’s about more than just the state’s gubernatorial election for Stephanie Catarino Wissman, executive director of the Associated Petroleum Industries of Pennsylvania. If Wolf does take office, his severance tax proposal would face challenges in what’s expected to remain a Republican-controlled legislature. Unlike the state House of Representatives, though, the state Senate’s Republican majority is narrow — by just four seats.

“Obviously, this is not just about the gubernatorial race; there are other folks calling for a severance tax in the legislature, which is not a good thing for our members,” Wissman said. “We’ve been out in front of this on many levels. There was a push for it back during budget negotiations in June and July, and we’re not naive to think the issue is not going to come back with various people vying for, and in elected office, pushing for it.”

“They all have one thing in common: they oppose a shale tax,” he added. “The question then is would they even let one come up for a vote? You can’t say never, never on anything, but my point is that it’s going to be a really, really, really tough sell in the House.”

As the governor’s race narrows before Tuesday’s election, sources agreed that it’s difficult to say how the political landscape could shift for the oil and gas industry in Pennsylvania no matter who takes office, especially considering some of the state’s thornier budget problems.

“I don’t know what happens if Wolf gets in there,” Wissman said. “We won’t know much until someone gets in there and starts advancing some of these proposals. Hopefully, we’ll have a clearer picture, whether it’s Wolf or Corbett.”