Spot gas prices for Wednesday delivery vaulted to record levels at some points as another incursion of a polar vortex was forecast to rake not only the East and Midwest but also make it as far south as Texas and the Southeast, dropping up to a foot of snow in some locations. 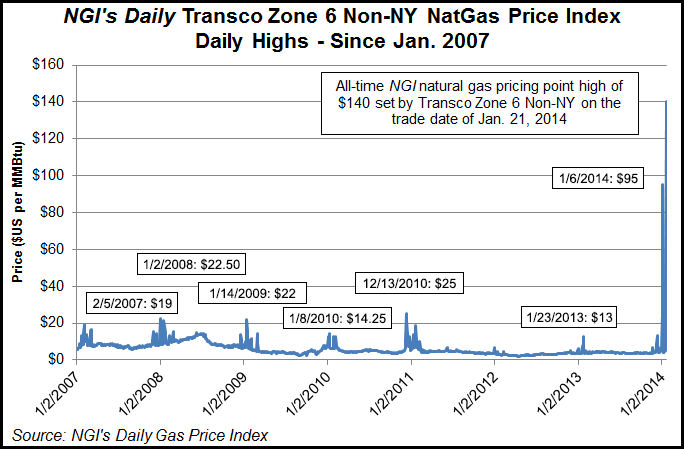 All points reported gains, with some locations reporting multi-dollar advances. Similar to the icy blast that hit the second week of January, this storm or series of storms is expected to send temperatures in major markets plummeting. Particularly hit in Tuesday’s trading were points in and around New York City, Philadelphia and Washington, DC. Futures prices registered only a relatively modest response. At the close, February had added 10.5 cents to $4.431 and March was up by 9.9 cents to $4.358. February crude oil added 62 cents to $94.99/bbl.

Prices in New York and the Mid-Atlantic area set records well above those seen in early January as the polar vortex was expected to send multiple pulses of cold into the heavily populated East and Midwest.

“Bitterly cold air is again settling southward from the Arctic into a large part of the Eastern states. Unlike the outbreak from early January, this time the cold will have more staying power,” said AccuWeather.com meteorologist Alex Sosnowski. “Into the first part of next week, the polar vortex will hover just north of the United States border, causing waves of frigid air to blast into the Midwest and much of the East.”

The first cold attack comes Wednesday. “Already Tuesday morning, [wind chill] temperatures plunged to minus 40 F over the Upper Midwest and were below zero as far south as portions of the Ohio Valley and as far east as northern New England. Dangerously low [wind chill] temperatures will spread southward in the East by Wednesday morning. The advancing cold will be severe enough to bring life-threatening conditions, hypothermia and the risk of frostbite to areas from the northern Plains to New England.” he said.

Sosnowski is looking for “a total of three waves of arctic air [to] blast across the Midwest and Northeast into next week. The next blast of arctic air will reach the Upper Midwest by Wednesday. While temperatures will briefly rebound in between the reinforcing waves of cold air, the rebounds will be much less pronounced from the Midwest to New England and may be barely noticeable in the northern tier states. Temperatures may stay below freezing in Minneapolis, Chicago, Milwaukee, Detroit and Cleveland through the end of the month, where highs most days will be in the teens.

“In Boston, Pittsburgh, Philadelphia, New York City and Indianapolis, temperatures may only surpass the freezing mark on one or two days through Jan. 31, [and] the persistent cold will cause a renewed buildup of ice on rivers in the Northern states. Ice jams could again become a problem during the coming weeks.

“At least two of the cold waves will reach into the South. In much of the South, temperatures will not be as low as that of the first week of January. However, many areas over the interior will have multiple nights where the temperature spends multiple hours well below freezing. Temperatures will dip to near freezing during a few nights along the upper Gulf Coast.”

An industry veteran with a major pipeline said he thought the higher prices this time around were due to abundant snow associated with the cold. “The majority of the cold is coming in a little further south with New York, [Washington] DC, and Philadelphia. Those are the big population centers so it is probably affecting more people than it did before. Population density is greater a little further south,” he said.

He said that his company put in operational flow orders today because “we anticipate it will get a lot colder as the day goes on. We want people to stay in balance and don’t do anything to the system before the real cold hits. You don’t want to be out of balance by 2%, 5%, or 10% and then have conditions get worse, and they can’t make it up. I think you do it in anticipation of colder weather.

“It wouldn’t have been fair to do it on Monday when the demand wasn’t there and temperatures were a lot warmer. You are putting people at risk of major penalties so you have to be aware of that. People might have to pay $15 plus the $100 or so they had to pay on Transco.”

Industry consultant Genscape reported that other pipelines are already gearing up for the expected cold. In its Tuesday morning report it said, “Southeast Mid-Atlantic demand has decreased 6.67 Bcf/d from last week’s average of 13.97 Bcf/d to 7.21 Bcf/d. However, due to an anticipated drop in temperature, SONAT has issued OFOs for multiple groups over the next several days.”

In addition, “Appalachia demand has increased 1.38 Bcf/d from last week’s average of 14.34 Bcf/d to 15.71 Bcf/d due to colder than normal temperatures. Transco is issuing a system-wide OFO with a minimum $50/Dth penalty. TGP, Empire, Nat Fuel and Col Gas all have released notices that flow will be effected by cold weather.”

Pipeline restrictions and notices almost seemed to be the rule rather than the exception at eastern points. Texas Eastern Transmission LP, Transcontinental Gas Pipeline and Algonquin Gas Transmission LLC all issued critical notices for Tuesday and Wednesday. Algonquin had approved and scheduled nominations at each pipeline segment and meter station up to its operational capacity, putting restrictions on points east and west of its Stony Point compressor station and from those west of its Cromwell Compressor Station for delivery to points east of Cromwell.

Algonquin also said it had restricted nominations sourced at the Tennessee Gas Pipeline interconnect at Mendon with 49% of interruptible nominations restricted upstream of the G System, as well. No increases would be accepted at any of these points on Tuesday and Wednesday.

“Due to the continued cold weather and high demand, Texas Eastern (TE) requires all delivery point operators in Market Area Zones M2 and M3 to keep actual daily takes out of the system less than or equal to scheduled quantities regardless of their cumulative imbalance position,” read the TE notice.

In addition Transco said market and production constraints were straining capacity at various locations on its 10,200-mile path from Texas to New York City.

Other market centers also posted gains. At the Chicago Citygates gas for Wednesday delivery rose a hefty $1.55 to $6.73, and gas at the Henry Hub added 19 cents to $4.58. Deliveries to SoCal Citygates gained 12 cents to $4.77.

Over the extended weekend, medium-term weather forecasts turned colder. Expected cold is seen as more intense than earlier. “A significant snow burst for the East Coast [Tuesday] works to enhance cold effects over the next number of days, assisting with colder changes in the short term,” said Matt Rogers, president of Commodity Weather Group, in the firm’s Tuesday morning six- to 10-day outlook. “The PJM region could see average temperatures rivaling the severe Jan. 7th event tomorrow, although wind chills should not be as intense. Also, the next surge of Arctic air early next week is looking stronger on the latest modeling.

“The result is likely demand gains from the Friday outlook for the Midwest, East, and even South where cold is getting more strongly even into Texas than forecast back on Friday. Beyond the 10-day window, the models are more divided, with the American staying colder and the European warming up as the pattern shifts a bit. However, it seems like it could be a reloading situation with colder risks after the first week of February.”

The National Weather Service in its forecast of heating requirements is looking for near-term usage to be well above normal. For the week ended Jan. 25 New England is expected to shiver under 308 heating degree days (HDD), or 24 more than normal, and the Mid-Atlantic is forecast to endure 297 HDD, or 33 above its seasonal norm. The greater Midwest from Ohio to Wisconsin is forecast to see 341 HDD, or 45 more than normal.

Analysts are undeterred in their outlook that the market is well supplied and not likely to stage a significant rally any time soon. Mike DeVooght, president of DEVO Capital, a Colorado-based trading and risk management, firm saw last week’s advance capped by what he sees as “technical and hedge selling at the $4.50 level,” and sees near-term market strength as selling opportunities. “On a trading basis, we will continue to use rallies approaching the mid-$4.00 level as a selling opportunity for the winter contracts, [and] $4.20-4.30 in next summer’s strip. Cold weather could support the markets, but more than adequate supply and flat demand will put a cap on gas prices for the foreseeable future.”

He counsels trading accounts to hold short February $4.50 calls at 20 cents and to also stay short March futures at $4.40 to $4.50. End-users should stand aside, and those with exposure to lower prices should hold short the remainder of a November-March strip at $4.50 to $4.60 and stay short the April-October strip at $4.20 to $4.30.

Tom Saal, vice president at INTL FC Stone in Miami, in his work with Market Profile see “weakness in the spot contract” but “The back years, Cal’ 15, Cal’ 17 and Cal’ 19 are showing some strength. Only people who trade the futures market can influence its outcome, all other people are just spectators.”