Egypt recently reached a landmark settlement with Israel, ending a multi-year dispute over natural gas deliveries and possibly opening the way for more growth in the Middle East. 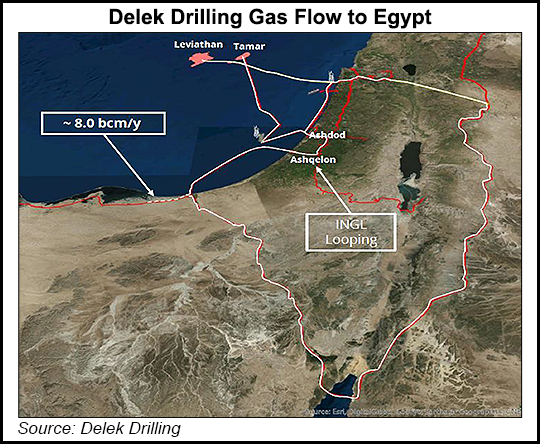 Egyptian General Petroleum Corp. and state-run Egyptian Natural Gas Co. in mid-June reached a deal with state-run Israel Electric Corp. (IEC) to pay a reduced fine for stopping gas deliveries in 2012. The stoppages at the time came amid a number of attacks by insurgents on an Egyptian gas pipeline in Egypt’s Sinai Peninsula.

The two Egyptian energy companies agreed to pay $500 million in payments spread out over eight-and-a-half years in exchange for Israel dropping other claims resulting from a 2015 arbitration decision reached by the International Chamber of Commerce, which ordered Egypt to pay a $1.8 billion compensation fine.

At the time supply was cut off, Egypt was supplying Israel with more than 40% of its gas needs to produce electricity.

The gas dispute settlement comes as both Israel and Egypt have been forging new energy cooperation amid giant offshore gas discoveries in the Mediterranean Sea.

Houston-based Noble Energy Inc. and its Israeli partner Delek Group signed a deal last year with Egyptian East Gas Co. to enable gas exports to Egypt. The consortium also bought 39% of a disused mostly undersea pipeline connecting the city of Ashkelon on Israel’s coast with the northern Sinai for $518 million.

The buyer for the gas was Dolphinus, an Egyptian company that supplies gas to industrial and institutional users. The two 10-year agreements provide for total contract quantities of 1.15 Tcf from Israel’s Tamar and Leviathan offshore gas fields in the eastern Mediterranean.

The gas price formula used for the two contracts is the same under both agreements and is linked to Brent oil prices, similar to Noble’s other regional agreements. The deal marks the first time that Egypt imported gas from neighboring Israel. In 1979, Egypt was the first Arab country to sign a peace deal with Israel. Jordan, in 1994, was the second Arab country to sign a peace accord with Israel.

The Tamar field, which began production in 2013, has estimated reserves of 11.2 Tcf, while the Leviathan field, set to begin production late this year, is estimated to hold 21.4 Tcf and around 34.1 million bbl of condensate.

The field, discovered in 2009, is expected to meet the bulk of Israel’s domestic gas demand for years, while the Leviathan field, discovered in 2010, is expected to be developed for both the domestic market and for liquefied natural gas (LNG) exports. Subsequent smaller discoveries have increased Israel’s dry gas resources to nearly 36 Tcf, according to energy consultancy Wood Mackenzie.

Tudor, Pickering, Holt & Co. Inc. said in a recent note that “with the clearing of this dispute along with the upcoming closing of Noble’s and partner Delek’s purchase of a stake in the East Mediterranean Gas pipeline, some of the most daunting hurdles impeding natural gas exports from Israel’s Leviathan and Tamar fields look to be cleared.

Egypt’s return to the LNG exporters club came after Italy’s Eni SpA discovered the super-giant Zohr gas field in the Mediterranean offshore Egypt in 2015. Gas reserves from Zohr also help Egypt meet its domestic gas demand and by last year eliminated the need for LNG imports. Total gas reserves at the Zohr field is placed up to 30 Tcf, according to Eni.

Egypt is also looking to double its LNG export capacity to 2 Bcf/d by the end of the year, and plans to collaborate with Saudi Arabia in exploring hydrocarbon reserves in the Red Sea, Egypt’s Petroleum and Mineral Resources Minister Tarek El Molla said in April on the sidelines of the World Economic Forum on the Middle East and North Africa.

Israel, for its part, is also expected to emerge as a major gas exporter in the Mediterranean region by the mid-2020s, according to Global Data, a data and analytics company. Israel’s current remaining recoverable gas reserves are estimated to be around 26.2 Tcf, around 62 times more than the country’s anticipated gas consumption in 2019, the data firm said.

“For the first time in late 2019, Israel’s gas production is forecast to balance with its total gas consumption owing mainly to Tamar…supplying around 950 MMcf/d, and the ramp up of Leviathan Phase 1A, which will supply around 200 MMcf/d to the domestic market,” Global Data said. “When the existing discoveries of Leviathan and Karish start producing, gas production in Israel will significantly exceed demand and it will be necessary to export surplus gas.”

Headwinds remain for Israel’s gas export ambitions because of the country’s complicated geopolitical history with its Arab neighbors, however, recent gas deals with both Egypt and Jordan are also helping to change the geopolitical landscape in the region.

“By the end of 2019, upon commencement of gas production from the Leviathan field, the pipeline grids in all three neighboring countries — Israel, Jordan and Egypt — will be physically connected,” Delek spokeswoman Maya Speer, told NGI. “This infrastructure connection and the access to the regional Pan-Arabic grid open a wide range of opportunities for all of us.”

Other major gas discoveries in the area, including the Zohr discovery, and the Aphrodite offshore field in Cyprus, around 21-miles west of the Leviathan field, would also create more competition for gas in the region.

Cyprus and Egypt are said to have signed an agreement supporting construction of a pipeline to carry Aphrodite gas to Egypt. Well tests estimate a gross resource range of 5-8 Tcf gas in the field, with a gross mean value of 7 Tcf. The field is jointly owned by Noble (35%), Royal Dutch Shell plc (35%) and Delek (30%).

In February, a major discovery that may represent a gas resource of 5-8 Tcf was found offshore Cyprus by oil major ExxonMobil Corp., which partners in the block with state-run Qatar Petroleum. Cyprus Energy Minister Georgios Lakkotrypis said at the time the discovery may lead to even more off the coast of the island nation, which has stated that it wants to take part in becoming an energy source for Europe.

According to Rystad Energy, the Middle East has the largest discovered natural gas reserves in the world, placed at 36 trillion cubic meters (Tcm), around 28% of the world’s gas reserves, ahead of North America’s 26 Tcm, a 20% global share, and Russia’s 24 Tcm, a 19% share.

Australia, which recently bypassed Qatar as the top LNG leader with 80 million metric tons/year worth of liquefaction capacity, has discovered gas reserves of 6 Tcm, a 5% global share.