Gulfport Energy Corp. is facing resistance from another investor that claims the underperforming producer should immediately announce a 25% reduction in spending for 2020. 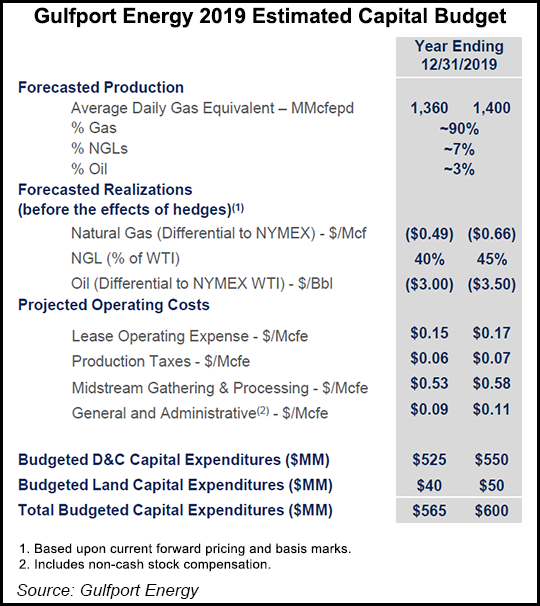 In a letter to the board, investment firm Shah Capital, which owns three million shares or about a 2% stake, noted that Gulfport shares are trading at the lowest point since the company went public, “despite the strength” of its assets and cumulative capital expenditures of $4.7 billion since 2016. With no debt maturity until 2023 and an enterprise value including debt of $2.6 billion, Gulfport has an opportunity to generate more value, Shah said.

The investment firm implored the company to cut next year’s capital expenditures (capex) to $400 million. At that level, the firm said, the company could still generate significant free cash flow at current strip prices even if year/year production declines by about 5%. The company slashed 2019 spending to a range of $565-600 million from $815 million in 2018. This year’s drilling and completion expenditures are set at $525-550 million, down from the $695 million spent on the line item last year.

“This sensible capex plan” would “send another signal” that Gulfport is a “rational player” that is realistically considering the current imbalance between natural gas supply and demand imbalances, Shah said.

The firm also wants Gulfport to amend its $400 million share repurchase program and accelerate the sale of its water handling and recycling facilities in the South Central Oklahoma Oil Province (SCOOP), a process that is already underway.

“Frankly, we challenge the new management team to lead Gulfport in a way that sets an example” for the exploration and production sector “in terms of further capital discipline and production cutbacks, where a majority of industry peers, including private operators, have failed miserably,” wrote managing general partner Himanshu Shah in the letter to the board.

CEO David Wood took the helm late last year after his predecessor resigned over personal spending misconduct allegations. Wood has repeatedly acknowledged the headwinds facing natural gas producers in particular. About 90% of production, which comes from the Utica Shale and SCOOP, is natural gas.

Shah’s letter comes as gas operators have been hard hit by sustained low prices and stingy investors who are pushing for better returns after years of a growth-at-all-costs approach in the oilfield. Many Appalachian producers have seen their values plunge and are now curbing their outlooks to rein in spending and appease the markets.

The bulk of Gulfport’s volumes are from Appalachia, where operators overall have announced plans to cut spending this year and next. After the second quarter, however, many continued to guide for either increased production in 2019 or moderate growth in 2020. Gulfport has, so far, been one of the only operators to keep this year’s production levels flat with 2018, which hasn’t won over investors.

Earlier this year, the company announced a share repurchase program to be completed over the next two years, which follows another recently completed program. That announcement came after hedge fund Firefly Value Partners sent a similar letter to the board in which it said Gulfport’s stock had “massively underperformed.”

Appalachian operators have seen their values erode in recent years, with many market capitalizations at or well below $2 billion. With the exception of a few, most of the basin’s leading operators have shares that are trading at only a few dollars each.

Gulfport’s stock has traded at a 52-week low of $2.28/share. At midday Tuesday, it was trading above $3.00/share. The company has also been selling noncore assets, most recently exiting its legacy position on the Gulf Coast, with plans to sell more. A sale of the water assets is expected soon.

“The cash generating strength of Gulfport’s Utica assets combined with natural gas liquids-rich and cost-friendly Scoop acreage, not to mention significant ability to unlock value from quality non-core assets, gives us confidence that Gulfport’s underlying strengths have been buried and forgotten by years of past missteps,” Shah said, adding that the new management team has an “extremely unique opportunity” to be a role model for the industry.