To the disappointment of West Slope producers, the Obama administration and Colorado Gov. John Hickenlooper joined forces in Denver on Thursday to announce the cancellation of oil/natural gas leases in the White River National Forest, including the long-contested Thompson Divide. They said the cancellation balances resource protection and development. 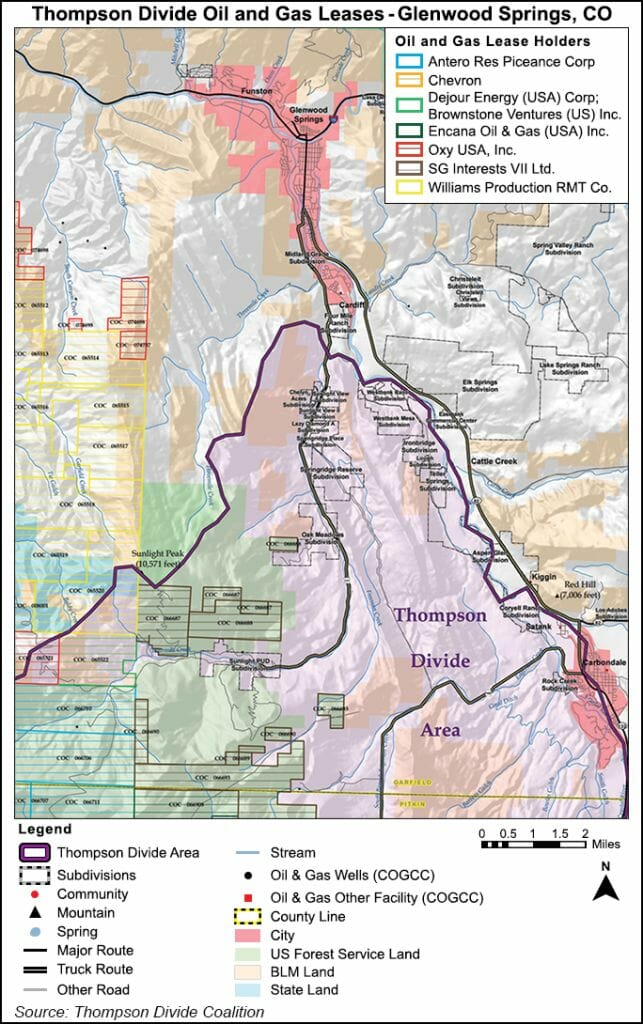 Both Interior Secretary Sally Jewell and Hickenlooper said the action on 65 oil/gas leases was an example of government, communities and industry working together, but western Colorado oil/gas producers were calling it a “legal travesty.”

The West Slope Colorado Oil/Gas Association (WSCOGA) and the Western Energy Alliance (WEA) jointly condemned the action by the U.S. Bureau of Land Management (BLM) to retroactively cancel 25 of the leases more than a decade after they were granted. They did not indicate when or how, but made clear that appeals will be sought through the federal agency and/or the courts.

Jewell, whose agency includes BLM, and BLM Director Neil Kornze joined Hickenlooper in outlining the federal government’s final decision on the leases.”[This] is a testament to the ability of individuals, businesses, governments and organizations in Colorado to work together to find solutions that make good sense,” she said.

Jewell’s announcement was expected, as it follows closely a BLM proposal to cancel 25 oil/natural gas leases that were issued more than a decade ago in the Thompson Divide area.

Calling federal action a “taking” of private property rights, COGA CEO Dan Haley said that while the natural gas leases are gone now, “we are hopeful that the new [Trump] administration can work to right this wrong.” Haley called oil and gas “a balance” of property rights.

WEA Vice President Kathleen Sgamma said the Obama administration’s “regulatory overreach knows no bounds,” adding that her organization and the industry in western Colorado are “looking forward to a Trump administration that is not out to actively stop responsible development of U.S. oil/gas and that honors decade-old contracts.”

Urging no “gloating,” Ludlam said the Obama administration “won a political victory at the expense of our constitutional property rights.” He said communities in western Colorado were hurt by the decision.

One local official, Mesa County Commissioner Rose Pugliese, attended the Denver announcement and expressed concerns about the federal government’s decision. Over the past five years, Mesa County officials have complained about their views being ignored by federal officials, Ludlam said.

Local officials and Ludlam’s organization have been warning that the lease cancellations will hurt local economies in the western part of the state.

Pugliese told NGI‘s Shale Daily late Thursday that Jewell’s department had no consultation with her Mesa County board prior to making its decision, saying the Interior secretary “put partisan politics over people.” She said Jewell should have made the announcement in western Colorado “and faced the constituents who continue to be affected by her job-costing policy decisions.”

Hickenlooper said the decision reflects hard work “by local governments, industry, engaged residents, and our federal partners to reach a balanced solution.” He said Thompson Divide will be protected, while acknowledging “the investments companies have made in the area and lets people get back to business.”

In addition to the Thompson Divide area, BLM’s record of decision also adopted terms of a 2014 settlement agreement resolving litigation focused on the agency’s Roan Plateau Resource Management Plan. Like the Thompson Divide, BLM said Colorado considers the Roan one of its “most ecologically diverse landscapes.”