Despite soaring temperatures across much of the West late in the week, particularly in California, weekly gas prices tumbled, driven lower by steep declines early in the period as cloud cover spanned parts of the western and southern United States and cooler temperatures moved into the nation’s midsection. 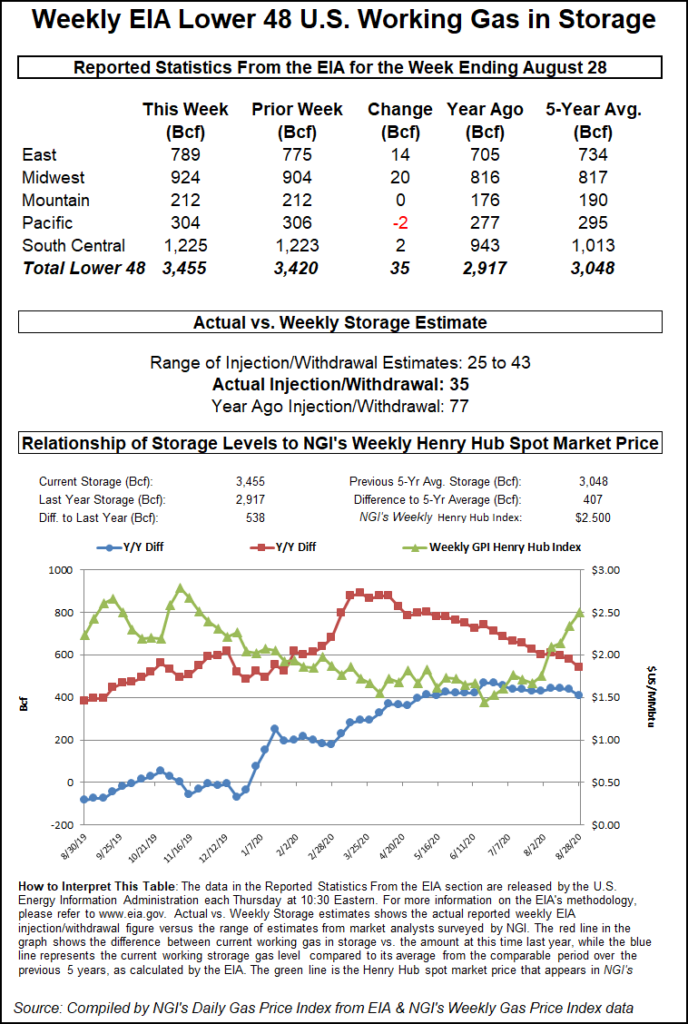 Without air conditioners cranking early in the week, NGI’s Weekly Spot Gas National Avg. for the Aug. 31 to Sept. 4 period declined 12.5 cents to $2.115

Intense late-summer heat took hold during the week in the West – with more expected over the long Labor Day weekend – gripping large swaths of California and much of the Southwest. Lofty temperatures also permeated Texas and parts of the Southeast, adding to strong overall cooling demand. But the surging temperatures came too late to offset the week’s slow start.

While cooling temperatures are expected over much of the central United States, NatGasWeather said overall demand could continue to prove strong during the week following Labor Day, driven by “hot conditions over the West and very warm conditions” over the South and areas of the East.

Brad Harvey, a senior meteorologist for Maxar’s Weather Desk, said summer 2020, through August, was the third hottest on record, with a run of consecutive days between June 18 and Aug. 2 on the hot side of the 30-year normal high temperature.

Analyst Andy Weissman of EBW Analytics Group noted that as a relatively high level of people continue to work from home, alongside a slower economy, gas-powered electricity demand has shifted from the commercial and industrial sectors to residential, where weather extremes are often necessary to drive both cooling and heating demand. EBW noted that, from June 2019 to June 2020, domestic residential demand climbed 9.8%, while commercial and industrial declined by 5.8% and 6.7%, respectively.

“This shift has increased the weather sensitivity of electricity demand,” Weissman said. “Individuals — particularly those facing economic hardship — are more likely to only turn on the air conditioning when needed, in contrast to an office set at 70 degrees around the clock.”

Looking ahead to fall weather, he added, a decline in weather-driven demand “may be further exacerbated by shifts in the composition of electricity demand.”

Natural gas futures struggled to maintain momentum most of the week as traders looked ahead to the shoulder season and expectations for tapering demand during the fall months.

But the continued weather-driven demand in the West was enough to drive a late Friday rally to culminate the week.

The U.S. Energy Information Administration (EIA) on Thursday reported an injection of 35 Bcf into storage for the week ending Aug. 28. The number was in line with median estimates of major polls, and it was below the 77 Bcf injection reported a year earlier and lower than the five-year average build for the week of 66 Bcf.

Analysts at Tudor, Pickering, Holt & Co. (TPH) wrote in a note to clients that “power generation was the story” for the covered period. TPH estimated an average of around 41.5 Bcf/d of power burns for the week, a total high enough to set a new seasonal record by nearly 3 Bcf/d. “Power generation was spurred by degree days, which were a whopping 22% above norms, continuing a trend of strong weather across the entire injection season as cumulative degree days are up 10% versus the five-year.”

Futures climbed shortly after the EIA report but lost some ground in afternoon trading Thursday and fell further Friday morning before shifting later in the day as markets absorbed the intensity of heat in the West.

TPH said data for the week ended Sept. 4 – which the next EIA storage report will cover — points to a roughly 5 Bcf/d week/week drop in power burns, as cooler temperatures started to move into the nation’s midsection. That combined with weaker LNG demand from Hurricane Laura-related outages has TPH estimating a roughly 6 Bcf/d week/week drop-off in total demand for the week.

Following the destruction of Laura in late August, which cut off power to nearby refineries and industrial plants, the Sabine Pass and Cameron LNG export facilities in Louisiana did not resume significant operations during the week.

“As a result, we’re looking for a much larger build” with the next storage report, “currently modeling a 68 Bcf build, which would be in-line with seasonal norms,” the TPH analysts said.

Spot gas prices climbed Friday at key western hubs, with heat intensifying in the West and state authorities in California cautioning that triple-digit temperatures could cause power outages through the Labor Day weekend.

The National Weather Service had issued extreme heat warnings for most of California, with weekend daily highs expected to eclipse 110 degrees in Sacramento and approach that mark in other major cities including Los Angeles and San Diego.

Southern California Gas Co. demand for the holiday weekend was projected to top 3.0 Bcf/d, Genscape said. That would be “slightly lower than peak demand seen during the heatwave” in Mid-August, “which led to rolling blackouts across California. Both SoCalGas and Kern River have posted notices alerting shippers to the coming weather, which will be 10-20 degrees hotter than normal.”

Temperatures and demand also soared in the Southwest.