An energy industry-backed report released on Wednesday concluded that in the last five years North Dakota has derived more than 50% of its revenues from the oil and natural gas sector. 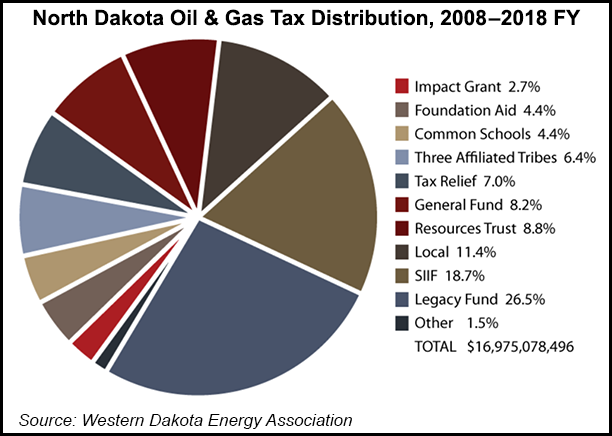 The report was jointly sponsored by the North Dakota Petroleum Council (NDPC) and the Western Dakota Energy Association (WDEA). Authored by Brent Bogar of Jadestone Consulting, it analyzed oil and gas extraction and gross production tax collections by the state over the past 10 years (2008-2018), identifying where and how more than $18 billion in oil and gas-generated funding has been used.

Over the 10-year period, an average of 44% of the state’s revenues came from oil and gas, but in the five most recent years that average jumped above 50%.

Noting that he thinks it was important to mine this tax data and make it public, NDPC President Ron Ness said he hopes it will be “useful to the state legislature” as it considers the state’s biennial budget.

Ness and WDEA Executive Director Geoff Simon emphasized that the report helps underscore that the industry’s operations benefit the entire state, not just the western half where the Bakken Shale is located.

Among the highlights of where the money has been going, the report said $1.2 billion funded water projects over the last 10 years, and another $875 million went toward local transportation. Simon said this helps give the state’s citizens “a clear picture of how their government services are being funded.”

Others areas of support statewide that were identified included $7.3 billion for local communities and infrastructure, and another $4.5 billion for the state’s “rainy day” fund.