Explosive and unparalleled growth in the Appalachian Basin was the center of attention Wednesday as the first day of Hart Energy’s DUG (Developing Unconventional Gas) East Conference in Pittsburgh got underway. 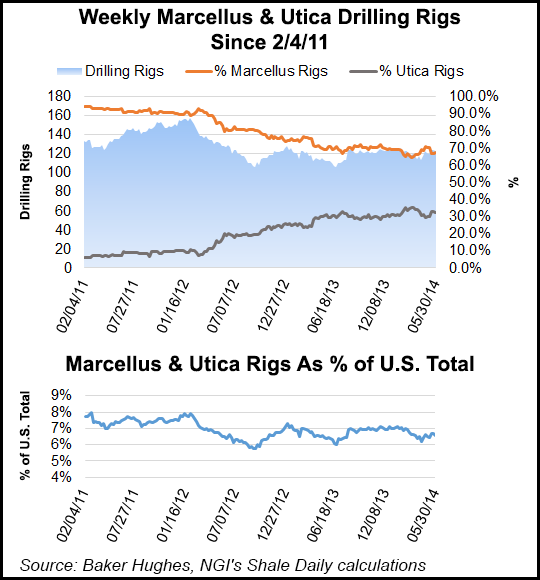 In the 10 years since Range Resources Corp. drilled and completed the first commercial Marcellus Shale well in Pennsylvania in 2004, multiple pay horizons, expanding pipeline infrastructure and the wealth of knowledge that exploration and production companies have acquired has helped drive the development of 7,000 horizontal wells in the Marcellus. That activity rapidly spread to development in nearby Ohio and West Virginia, conference speakers said.

Range CEO Jeffrey Ventura said it took years for the company to get its drilling program off the ground in Pennsylvania, but it was in 2007 he said when Range and other early pioneers knew they had a winner. The Utica Shale, Marcellus and Upper Devonian formations have helped Range to assemble an asset base that it expects will grow the company’s current reserves by seven to 10 times.

President of the consulting firm Wright & Co. Inc., Randall Wright, told conference attendees that the basin’s increasing estimated ultimate recoveries, growing activity and expanding infrastructure are all being driven by an “uplift in the learning curve” here.

“As operators gain knowledge they have better performance. There’s a new learning curve,” Wright told the conference. “The technology is different, the lateral placement is different, geosteering, or target zones, are improving and completions are too. You’re going to hear a lot in the next two days about completion designs and the explosive changes in the use of sand and other technologies. The main thing, though, goes back to the geology, the quality of the rock and you must connect to the quality of the reservoir.”

Wright said operators in the basin are becoming increasingly better at doing just that. Longer laterals, shorter hydraulic fracturing (frack) stages and sharper core analyses are lifting results. Wright said the numbers and data that his firm collects have consistently proved that.

According to the Energy Information Administration (EIA), the gains have led operators in the Marcellus to go from producing just 1.5 Bcf/d in 2007 to about 15 Bcf/d this month.

He said production from that area is forecasted to increase by 250 MMcf/d between May and June. Gorgen also said Marcellus wells drilled in the state last year produced on average 5 MMcf/d more than those drilled in 2010.

“These estimated data points suggest a shorter learning period; operators are getting better,” he said.

Gorgen told NGI’s Shale Daily that the EIA is currently considering grouping the Utica Shale and Marcellus Shale, along with shallower formations in Ohio, West Virginia and Pennsylvania, into a single Appalachian Basin line-item that would replace the Marcellus Shale on the DPR. He said he didn’t know when that might happen, but said it could be soon if production keeps growing like it has in the region.

Drilling rigs working the Marcellus and the Utica shale regions consistently have comprised between 6-8% of all active U.S. oil and gas drilling rigs since February 2011. However, the mix of Marcellus and Utica rigs has changed significantly during that time, said Pat Rau, NGI director of strategy and research. In February 2011, the Marcellus accounted for 94% of the 134 rigs that were drilling the Marcellus and Utica Shales, but that percentage dropped to 67.5% of the combined 123 rigs working those two areas as of May 30, 2014, according to Baker Hughes data and NGI’s Shale Daily calculations.

Expressing the same in regular numbers, the Marcellus rig count fell from 134 on February 11, 2011 to 83 rigs on May 30, 2014, while the Utica rig count climbed from 8 rigs to 40 over the same time period. “The Utica rig count continues to increase, as operators work on testing and delineating their acreage in Ohio, Pennsylvania, and more recently, West Virginia,” Rau said. “Meanwhile, the Marcellus rig count has fallen in recent quarters in the face of producers shifting more from a delineation/acreage retention phase to more of a manufacturing mode.”