FERC should do more to address the perceived regulatory risk of reporting to price indexes, panelists at a technical conference on natural gas index liquidity and transparency told Commission staff last week. 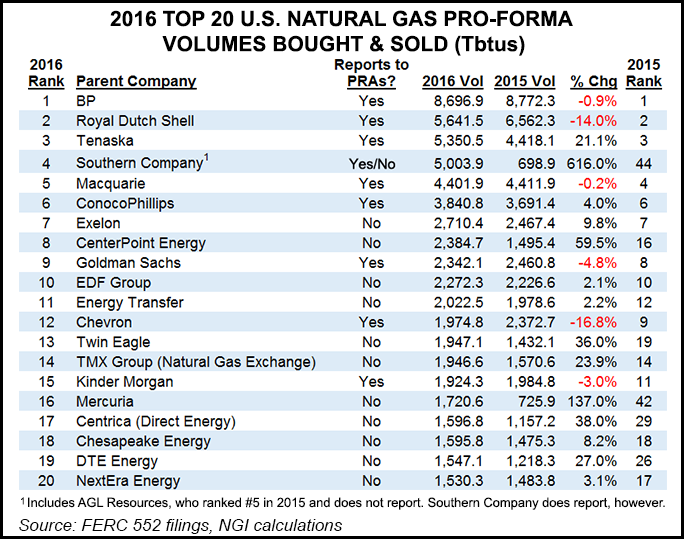 While generally praising the operation of the indexes, which have been conducted according to Federal Energy Regulatory Commission policy guidance since 2003, panelists noted that participation in the underlying price surveys has fallen off to some degree in recent years, particularly in the bidweek market.

Meanwhile, despite general agreement among panelists that mandatory reporting could have unintended consequences, BP Energy Co. CEO Orlando Alvarez called for a system that would require top natural gas marketers — those whose activities are limited to buying and reselling gas — to report to price reporting agencies (PRAs).

Fielding questions from a roundtable of FERC staff –heavily balanced with personnel from FERC’s Office of Enforcement — producers, traders, pipelines publishers, electric power buyers, analysts and academics discussed the declines in reported fixed price deals observed over the last decade or so.

Those declines have stabilized the past few years, especially in the day-ahead market. But overall trends in FERC Form 552 data show higher numbers of transactions tied to PRA indexes and smaller percentages of traded volumes reported to PRAs, providing enough reason for the Commission to schedule a technical conference to look more closely at the index function and how it can incentivize more companies to report.

Commission Chairman Cheryl LaFleur noted that FERC has a vested interest in ensuring published price indexes are “robust and working well,” given that they are an integral part of FERC-jurisdictional tariffs.

A major way FERC could help, according to multiple panelists, would be to tweak its “safe harbor” provisions so that companies feel safer reporting. Whether real or not, price reporting carries a “perceived regulatory risk” that often skews the cost-benefit calculation away from disclosing deals to PRAs, they said.

Cheniere Energy Inc. Senior Vice President of Gas Supply Corey Grindal said many in the industry were around during the days of Enron and still see “vague regulatory risk” in the prospect of reporting, whether legitimate or not. The Enron debacle in the early days of the deregulated gas market caused FERC increase its oversight and enforcement division personnel from about 20 to about 200 today.

Grindal said Cheniere, not currently a price reporter, plans to start reporting by the end of the year.

David Louw, division director of risk management and compliance with Macquarie Energy, said companies “are very hesitant” to trade fixed price deals during bidweek because of the perceived risk of enforcement actions. FERC should “better define for us, what is manipulation?”

Price reporters need to have confidence in a specific set of rules they can follow “that will provide us safe harbor from costly and time-consuming inquiries and investigations,” he said.

Tenaska Inc. Senior Vice President Drew Fossum echoed Grindal’s assessment — that whether there’s actual regulatory risk in reporting or not, the perception is the reality.

“We’re sort of on both sides of this issue,” Fossum said, noting that Tenaska is a price reporter that also trades a lot of indexed deals and thus is “vulnerable” to indexes that do not appear strongly supported and therefore become suspect.

“We would absolutely encourage companies that are not currently price reporting to look really hard at the cost-benefit ratio,” Fossum said. “Hopefully after this conference, the perception of that cost-benefit ratio will improve.”

He added, “Perceived regulatory risk needs to be addressed, and the Commission is in a unique position to do that.”

For his part, Alvarez said a decline in the number of price reporters does create regulatory risk for companies like BP that continue to report.

Alvarez voiced frustration with situations where BP — simply by virtue of being the largest producer-marketer and making the effort to report — has become a big part of the price formation at certain indexes, which “just invites risk” for his company.

“We’re in the position, as a leading marketer…my traders are trained to make markets for those utilities, those customers that want to price their gas” at a particular location, Alvarez said. By trying to “make fair markets for our customers” and contribute to transparent indexes, BP exposes itself to scrutiny while non-reporting marketers use indexes and “just piggyback” off those that do report, he said. Most of the largest producer-marketers like BP do report to the PRAs.

Alvarez suggested that a purely voluntary system may not be enough.

“We keep using the word ‘encourage’…We can’t just encourage. I don’t think that’s going to work,” he said, calling for an approach with “some more teeth to it.” Alvarez urged FERC to expedite action, noting he has been asking the Commission to examine the issue for the last two years.

Pointing out that most of the companies on a recent list of top 10 natural gas marketers don’t report, Alvarez proposed that FERC make it “mandatory for marketers that are in the business of buying and reselling gas” to report to PRAs. “If you just did that, just in the top 10, you would have some pretty robust numbers coming into the indexes.”

Mark Callahan, editorial director for Platts North America, S&P Global, said FERC should look at ways to “make it more of an incentive to price report” by turning the tables on non-reporters. Callahan suggested protecting voluntary price reporters from additional FERC audits while auditing those companies that don’t report.

“I would argue that closer attention should be paid to companies that choose not to price report,” Callahan said. FERC should be “focusing more on them rather than creating this perceived burden on price reporters.” FERC in recent years has done a number of extensive audits of some of the largest price reporters, the latest examining four years of trades by ConocoPhillips.

Vince Kaminski, professor in practice of energy at Rice University, said there are those willing to take advantage of the common good but not contribute to it. When it comes to price reporting, “there will always be market participants” not interested in contributing to the transparency of indexes “because they have access to better information than the average market participant.”

The FERC policy statement says that companies that report fixed price deals to PRAs, must submit all their reportable deals. The suggestion was made that FERC could specify that a company could choose to report just their daily prices or just their weekly prices, or both.

Kneale pushed back against the idea of using more regulation to try to increase reported volumes.

“I’m not necessarily going to echo the idea of required reporting. I’m not certain that adding more regulation or legislation is necessarily the answer,” Kneale said. Companies are smart and will naturally “gravitate” to the best solutions for their needs.

But even as they offered suggestions for encouraging more price reporting moving forward, panelists repeatedly expressed confidence in the current price indexes.

Greenwood said there’s a general consensus that “there is high confidence in the indices.” At current reporting levels, there’s an “incredible amount of data” to work with, and companies “are very, very data-rich in this industry,” he said.

“Do we have confidence in the indices? Yes we do,” he said. Compared to the European gas market, “you don’t know how lucky you are. Some of the problems you’ve been talking about as far as liquidity issues at individual points, yes, that’s important, but if you compare it to something like Europe, Europe is a very significant gas market. You have a fraction of the number of indices that you have in the U.S., and they’ve taken a long time to form the liquidity.

“Just bear in mind that this is an amazing U.S. gas industry that you’ve developed, which has got massive depth,” Greenwood added. “It’s got an enormous amount of people who are transacting gas here, and we certainly have confidence in the indices that are produced.”

NGI‘s Steis suggested FERC ask companies that don’t report to explain their reasons for not contributing to PRAs in their Form 552 submissions.

Especially in the day-ahead market, the drop in reported fixed price deals appears to be an “asymptotic decline” approaching a stable floor of reliable reported transactions, according to Steis. But the number of fixed price deals reported during bidweek is “still tenuous,” he said.

Steis noted that indexed deals have increased as a percentage, making PRAs like NGI“victims of our own success. It is precisely because folks in the room value the reliability and transparency of the indexes” that they rely on them in their transactions, he said.

“The ratio of index priced gas to fixed price gas has gone from about 4 to 1 to 8.5 to 1,” he said. “That is a vote of confidence in those indices by the folks that have money at stake, that are pricing deals and are transacting in that industry.”

Steis noted that many local distribution companies are “happy” with indexed deals because state regulators are likely to view such transactions as “prudent and just.” FERC could try to work with state utility commissions to encourage regulated utilities to do a certain percentage of fixed price deals and report them, thus supporting the indexes they very heavily rely on.

As for whether other parts of FERC’s 2003 guidelines for natural gas price reporting should be updated, there was general agreement that, aside from the safe harbor provision, the document continues to hold up well.

Offering “kudos” for writing a policy document that has stood the test of time, Steis suggested tweaks to provide more clarity on error correction.

“We get questions from time to time about how long after a trade has been submitted, should they find that there has been an error in that submission, should they be required to report that,” he said. “So maybe just some fine-tuning around what the standards are for error correction.”