India’s minister for oil and natural gas said a state-owned gas utility has been trying to renegotiate separate contracts with Cheniere Energy Inc. and Dominion for importing liquefied natural gas (LNG), with the most recent discussions occurring last month. 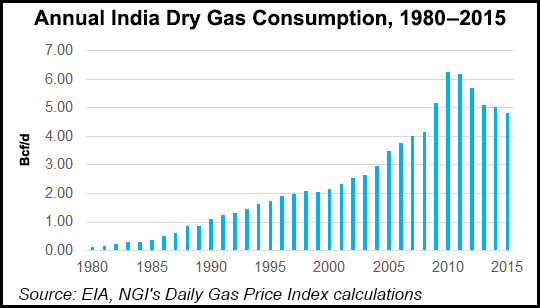 Meanwhile, Dominion said it is continuing with final commissioning work at Cove Point, but denied reports that it was renegotiating export contracts for the facility, which has a nameplate capacity of 5.25 million metric tons/year (mmty) of LNG.

On Wednesday, Shri Dharmendra Pradhan, India’s minister of petroleum and natural gas, said Gail (India) Ltd. “has held a number of discussions” with Cheniere and Dominion “for the renegotiation of contracts” to import LNG from Cheniere’s Sabine Pass and Dominion’s Cove Point LNG export terminals.

“The discussions have been held at the working level as well as the management level,” Pradhan wrote to answer a question posed by a lawmaker in the Rajya Sabha, or Council of States, which is the upper house of India’s parliament. “The most recent discussions with both parties were held during the month of November 2017.”

Pradhan added that India’s Petronet LNG Ltd., which signed a 20-year agreement to purchase 1.44 million tonnes per annum of LNG from Mobil Australia Resources Co. Pty. Ltd., an ExxonMobil Corp. affiliate, “has been under active discussions…regarding certain commercial aspects under its agreement and has reached an understanding related to the subject contract with ExxonMobil.”

Petronet operates two LNG import and regasification terminals in the country and is in the process of building a third. LNG imported from Australia would be sourced from the Gorgon Project, a joint venture between Chevron Corp., which holds a 47.3% stake and serves as operator, and ExxonMobil (25%), Royal Dutch Shell plc (25%), Osaka Gas Co. Ltd. (1.25%), Tokyo Gas Co. Ltd. (1%) and JERA Co. Inc. (0.417%).

But in a statement Tuesday, Dominion said “the characterization of contract renegotiations is false. Conversations are ongoing with export customers in preparation for beginning commercial operations, but there have been no changes in the contract terms since initial contract execution, and Dominion Energy does not intend to renegotiate contract terms in the future.”

Dominion said it “looks forward to commercial operations early next year,” adding that “all major equipment has been operated and is being commissioned following a comprehensive round of thorough testing and quality assurance activities.”

Last week, the Maran Gas Delphi, a Greek-flagged tanker, docked at Cove Point and reportedly unloaded a full cargo of LNG in order to assist with the commissioning process. The ship had 159,800 cubic meters of LNG capacity, which converts to 3.3 Bcf. Dominion introduced feed gas at Cove Point earlier this month.

Pacific Summit Energy LLC, a U.S. affiliate of Japan’s Sumitomo Corp., has subscribed to the remaining half of Cove Point’s marketed capacity, also through a 20-year service agreement.