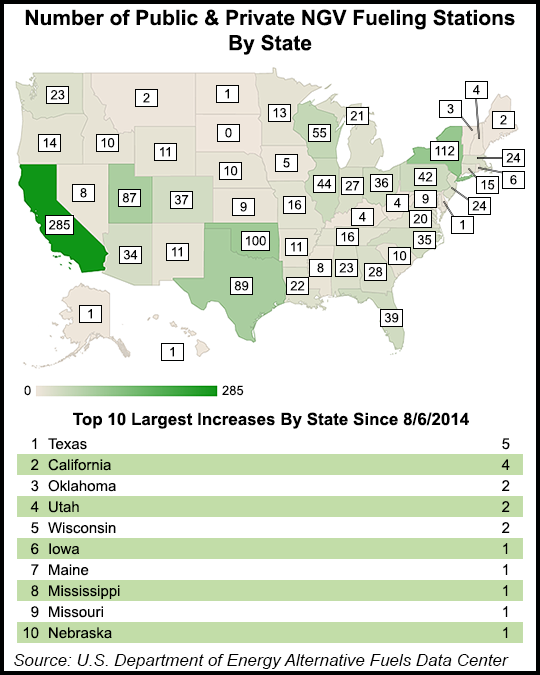 NGVAmerica and the Clean Vehicle Education Foundation (CVEF) are reminding CNG providers and operators to properly calibrate their equipment for winter temperatures. NGVs may be over-filled with fuel in extremely cold temperatures, leading to a hazard if weather warms or a vehicle is parked indoors, the two organizations said.

The CVEF recently issued a technical bulletin, “Reliable Temperature Compensation Is Critical to CNG Vehicle Safety,” stating that there are potential hazards from a failure of CNG dispensers to accurately compensate for temperature.

“Proper temperature compensation is essential to safely fuel CNG vehicles, regardless of the station type,” the bulletin said. “Serious incidents” have resulted from the overfilling of CNG containers at both fast-fill and time-fill facilities.

VNG’s strategy is to site CNG outlets at existing gasoline stations. Its first location was a BP station in Philadelphia that opened this summer. The GE CNG-in-A-Box compressor package is being used in the effort.

“The barrier is the cost and availability of CNG fueling stations,” Webb said. “Our alliance with VNG is a step toward breaking down this barrier.” Next, VNG plans to locate five CNG-in-A-Box units in the Boston area.

The state is making $2 million in grants available, and applications will be accepted through Jan. 12. Matching funds are required.

MEA estimates it would issue four or more grants in support of privately operated, publicly accessible fast-fill stations in the state. Both CNG and liquefied natural gas (LNG) are eligible for the grants as are combined CNG-LNG stations.

The state said one of the key concerns among fleet operators in making a switch to NGVs is the availability of refilling infrastructure.

Elsewhere, Norway-based Hexagon Lincoln recently received orders for $21 million worth of its Titan CNG mobile transport and Smartstore CNG storage modules. The trailer-mounted modules are slated for industrial use in Canada and Mexico. Hexagon’s TitanXL CNG trailer is the largest of its kind.