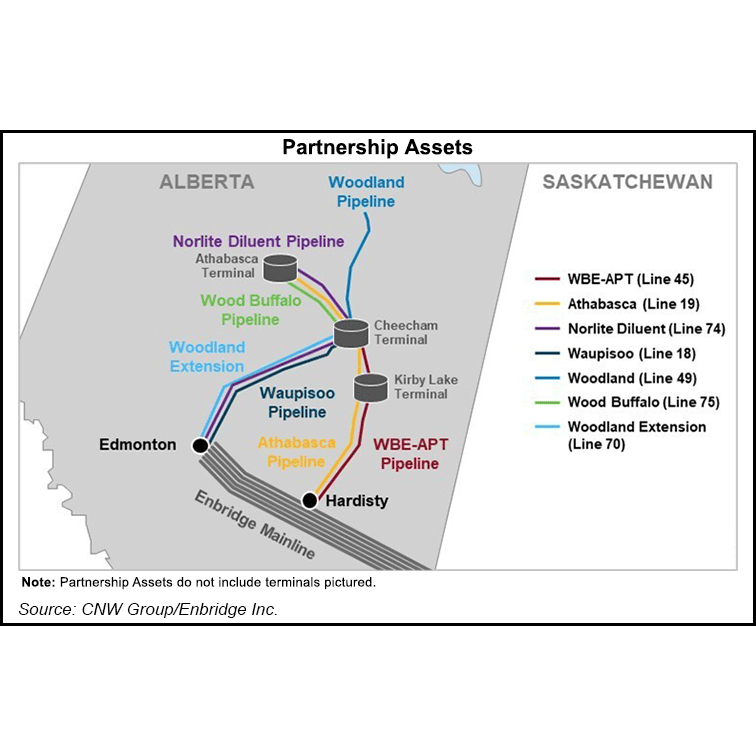 Under the transaction, Enbridge would continue to operate the feeder conduits into its international Mainline oil system, while First Nations and Metis groups in newly created Athabasca Indigenous Investments (AII) share revenues generated by 11.57% ownership.

Said AII President Justin Bourque, “Our partner logo theme – Seven Pipelines, Seven Generations – speaks to the long-term value potential of these assets, which will help enhance quality of life in our communities for many years to come.”

Enbridge CEO Al Monaco called the deal a collaboration landmark. “This partnership exemplifies how Enbridge and Indigenous communities can work together. We are looking forward to working with the AII and deepening our relationship well into the future.”

Frog Lake Chief Greg Desjarlais said, “In addition to an opportunity to generate wealth for our people, this investment supports economic sovereignty for our communities.”

The conduits in the transaction collect oilsands, heavy crude and delivery diluent supplies for Enbridge’s 3 million b/d Mainline from Central Alberta to the U.S. Midwest, Ontario and Quebec. They include the Athabasca, Wood Buffalo/Athabasca Twin and associated tanks; Norlite Diluent; Waupisoo; Wood Buffalo; Woodland; and the Woodland extension. The assets are underpinned by long-life resources and long-term contracts.

The Enbridge deal expands on well established regional native participation in the Alberta oil and gas industry on fronts from mine earth moving and work camps to environmental monitoring and bush clearing.

Natives represent about 6% of Canadian oil and gas workers or nearly double their 3.3% share of the national population, according to Statistics Canada. Oilsands plants spent C$15 billion ($11 billion) on Indigenous contractors since 2012, Canadian Association of Petroleum Producers data show.

While details of the provincial backing for the Enbridge deal were not disclosed, AIOC records indicate the total was about C$250 million ($190 million). The agency makes available a variety of assistance such as loan guarantees for Indigenous communities.

AIOC has a growth mandate that allows its total Indigenous enterprise commitments to increase to C$1 billion ($750 million).

AIOC CEO Chana Martineau said the Enbridge announcement “represents everything we want to be known for – multi-generational projects that bring real economic prosperity to Indigenous and Métis communities in Alberta.”