With freezing weather on the horizon throughout much of the United States, including Texas, February natural gas prices at hubs key to Mexico shot up this week. 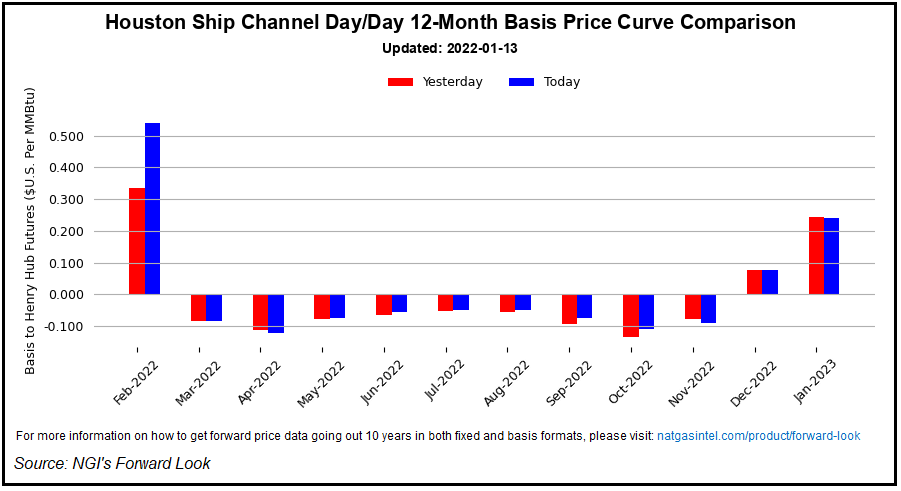 “This latest cold blast will be the first test of Texas production and gas flows since Winter Storm Uri in February 2021,” said NGI’s Patrick Rau, director of Strategy & Research. “The good news is the state has had nearly a year to prepare for such events. The bad news is any price spike in Texas will flow through to Mexico, because the overwhelming majority of gas imports into Mexico from the U.S. are tied to U.S gas prices.

“This just underscores the need for liquid price indexes in Mexico that are based on Mexican supply and demand characteristics.”

The cold blast is expected to hit during the final 10 days of this month, and prices are also being pressured by supply constraints. U.S. natural gas production had ticked up to start the year to 94 Bcf but output is still about 2 Bcf below late 2021 highs following freeze-offs early this year that curtailed producer activity.

“Gas consumption in the north of Mexico is going up because of the cold,” a trader told NGI’s Mexico GPI, and “there is a new round of nervousness about the weather in Texas.” To date, however, “it’s business as usual,” and the gas system in Mexico is “working fine.”

More than 85% of the total supply gains correspond to Petróleos Mexicanos (Pemex) gas processing complexes in Tabasco and Veracruz. Pemex has also unveiled plans to ramp up production at the Ixachi field and to restart operations at the gas-rich deepwater Lakach asset amid a more competitive pricing environment.

So far in January, estimated imports from the United States into Mexico are eclipsing the 5.5 Bcf/d mark. That is “slightly more than 1% above the December average,” Falcón said. “In Wood Mackenzie’s analysis, there is still upside potential this month as Mexico’s main gas-intensive sectors get fully back on track.”

NGI estimates that Mexico imported 5.84 Bcf of natural gas on Thursday (Jan. 13), with most flows (4.570 Bcf) coming from South Texas. Mexico had imported 5.47 Bcf/d from the United States via pipeline over the past 10 days, according to NGI.

Mexico’s Sistrangas five-day line pack average was 6.578 Bcf on Wednesday (Jan. 12), below the optimal line pack of 6.86-7.29 Bcf needed to guarantee sufficient pressure in the system.

Demand on the Sistrangas on Wednesday was 4.612 Bcf, down from 4.506 Bcf a day earlier. Mexico gas production fed into the system was 1.307 Bcf. Southeast production dominated the total, with 734 MMcf/d from the region injected into the pipeline system.

On Thursday, the U.S. Energy Information Administration (EIA) reported a 179 Bcf withdrawal from natural gas storage inventories for the week ending Jan. 7. The print was in line with the expectations of analysts.

The South Central region posted a withdrawal of 55 Bcf, including a 37 Bcf pull from nonsalt facilities and a 17 Bcf draw from salts. Until Mexico develops its storage capability, this is the storage system most readily available to the country.