Regulators in Illinois have approved the first permit to allow high-volume hydraulic fracturing (fracking) within the Illinois Basin. 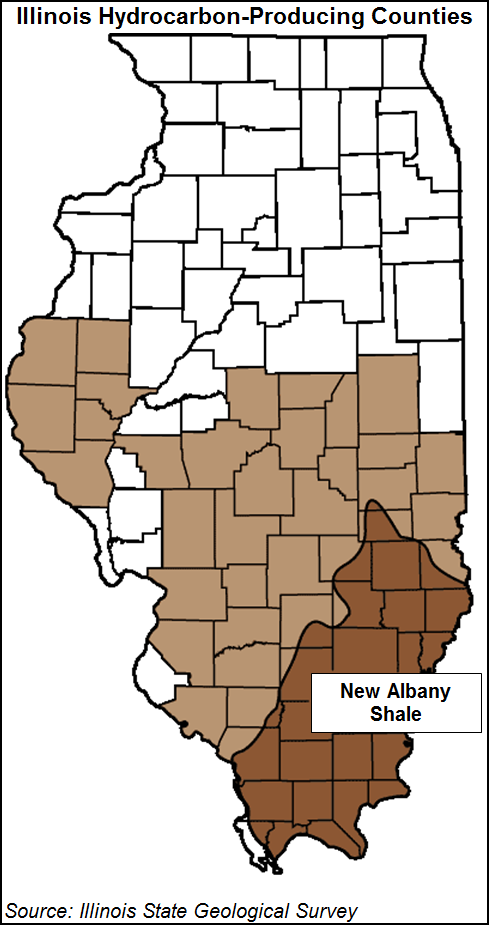 According to the permit, the well is targeting the Grassy Creek Shale, a member formation of the New Albany Shale in the Illinois Basin.

“We have been working on trying to go through the process of getting a permit approved,” Sooter said Tuesday. “We finally did get it accomplished. It’s been a tough task and taken a lot of time, and been a lot more expensive than what you have to do in other states in order to get a permit. But it’s a positive time for us because we were successful in getting the permit.”

“After its review, OOGRM determined that the application meets all of the requirements of the Hydraulic Fracturing Regulatory Act and the DNR’s rules,” the DNR said. OOGRM is working to compile its record of decision and plans to post it online.

“This is mainly an evaluation well,” Sooter said. The company wants to drill the Woodrow well before the end of the year and complete it early in 2018. “We like where our location is in the basin, but time will tell on what our plans might be afterwards and what production might be.

“There are a lot of things we still have to learn about [the basin]. We feel like it’s got a tremendous amount of possibilities. The Illinois Basin has produced more than 4.2 billion bbl of oil, and most of it was sourced from the New Albany Shale.”

Sooter said the Woodrow well is expected to produce both oil and natural gas, but gas would be flared until appropriate infrastructure can be built. “There are some major pipelines that go through the area, but there will have to be some work on developing infrastructure there for the gas pipelines.”

Lawmakers in Illinois began considering ways to regulate fracking five years ago, with the state Senatepassing a law in April 2012. To avoid a drilling moratorium, environmental groups and representatives of the oil and gas industry backed a bipartisan bill establishing the HFRA in February 2013. The bill, at the time dubbed the nation’s most stringent on fracking, was signed by then-Gov. Pat Quinn. The DNR then published an initial version of proposed rules on fracking and scheduled a series of public hearings on the matter.

But in August 2014, supporters and opponents of shale gas development in Illinois were unhappy with DNR’s proposed 150 pages of revised rules to the HFRA. Two months later, a legislative panel delayed a vote on the revised rules until after that year’s election. The rules were unanimously approved by the panel two days after Bruce Rauner, a Republican, was elected governor.

In 2012, the Illinois Chamber of Commerce reported that shale formations in the southern part of the state could potentially create $9.5 billion of investment and 45,000 jobs. The New Albany Shale formation underlies a substantial portion of southern Illinois.