Chances for Sempra Energy’s management team for Mexico unit Infraestructura Energetica, better known as IEnova, to move forward on a long talked about liquefied natural gas (LNG) export project in the country are “much higher” than they were three months ago, Chairman Carlos Ruíz Sacristán told analysts during a third quarter earnings call on Thursday. 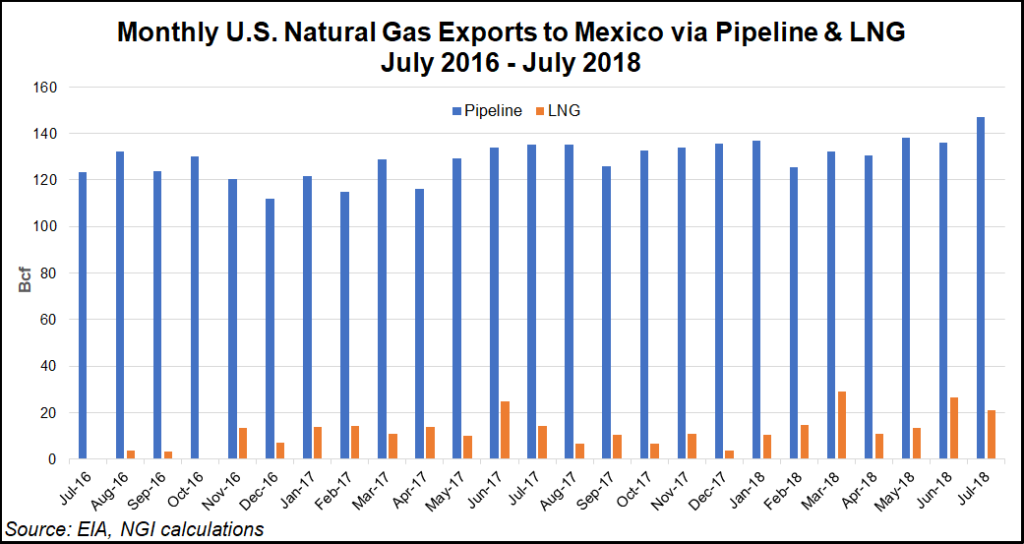 IEnova has made “substantial advances” in talks with potential customers in Asia, whose demand for natural gas would make the project viable, said Ruíz, who also heads IEnova’s North America infrastructure division.

The company is still evaluating whether to pursue a project with export capacity of 11-12 million metric tons per year (mmty), or a scaled down version with 2.5 mmty of capacity.

IEnova expects to make a final investment decision in the second half of 2019 on the project, which would be an expansion of the company’s existing Energía Costa Azul regasification and storage terminal.

If IEnova were to opt for the smaller-scale option, it likely would be a 50-50 joint venture (JV) with Sempra and the project would not require outside financing. But the larger-scale option would be substantially more expensive, requiring project financing and probably one or more additional JV partners, Ruiz said.

Mexico officials and analysts have advocated for exporting gas produced in the Permian Basin of West Texas and southeastern New Mexico in the form of LNG via Mexico’s Pacific coast as a cheaper alternative to shipping gas through the Panama Canal.

CEO Tania Ortiz said during the call the Sur de Texas-Tuxpan undersea natural gas pipeline, a 60-40 JV between TransCanada Corp. and IEnova, is expected to enter operation either late this year or early 2019.

Ortiz said construction is nearly finished on the 800-kilometer (497-mile) pipeline, which would transport gas from Brownsville, TX, to Tuxpan, Veracruz state, in Mexico. The pipeline would have transport capacity of 2,600 MMcf/d, and could largely displace LNG imports to the 700 MMcf/d Altamira regasification terminal on Mexico’s Gulf Coast.

Genscape Inc. senior natural gas analyst Rick Margolin said in a September presentation that the company was forecasting LNG imports to Mexico to drop from levels at the time of around 600 MMcf/d to under 200 MMcf/d beginning in April 2019, as Sur de Texas-Tuxpan and other pipeline projects come online, allowing gas produced in the United States to reach consumers in Mexico. Month-to-date LNG imports to Mexico have been averaging 394 MMcf/d in October, Margolin told NGI’s Mexico Gas Price Index.

IEnova reported a third quarter profit of $112 million, down from $127 million in the corresponding 2017 period. The decline was blamed mostly on higher financing costs and foreign exchange rate effects, partially offset by acquiring a 25% additional stake in the Los Ramones Norte pipeline, improved operational results at the Mexicali thermal power plant, and higher margins in the gas segment.