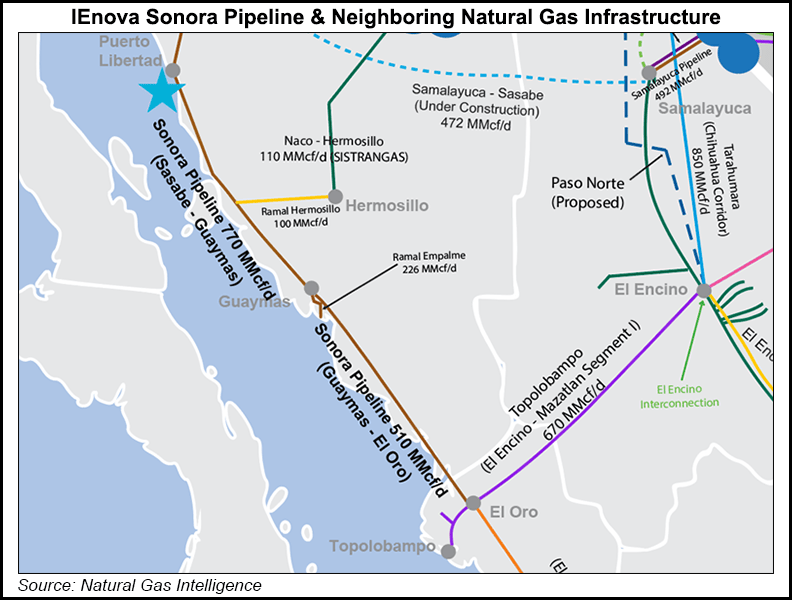 Developers IEnova and TC Energy Corp. in June announced the mechanical completion of the $2.5 billion pipeline, but the pipeline’s anchor customer ComisiÃ³n Federal de Electricidad (CFE) has not yet issued a letter of acceptance that would allow for commercial gas delivery.

Instead, the CFE on July 1 disclosed that it had filed a total of seven arbitration requests, six in London and one in Paris, pertaining to seven pipeline projects for which it seeks new contract terms, including the Sur de Texas-Tuxpan system.

IEnova CEO Tania Ortiz said in the second quarter earnings call that the company is in talks with the CFE in order to “avoid arbitration.” She added that she does not “see this dragging into next year” and that the Mexico government “has clearly stated that they want to reach an agreement soon.”

A working group has been established in an attempt to resolve the conflict prior to reaching the legal stage, with representatives from the government, business chambers Consejo Mexicano de Negocios (CMN) and Consejo Coordinador Empresarial (CCE), and officials from IEnova, TC Energy, Fermaca and Grupo Carso at the table. “We are meeting several times a week and pushing forward as quickly as we can,” Ortiz said.

Officials from the business chambers in particular are concerned about the spillover effects of the standoff in terms of investor confidence in the country. “They do see this potentially impacting other businesses” in Mexico, Ortiz said.

The pipeline in particular had been earmarked for supplying gas to Mexico’s YucatÃ¡n Peninsula, which is suffering from natural gas shortages and electricity outages.

Meanwhile, IEnova said that a federal judge in Mexico’s Sonora state had rejected an injunction that was preventing the 510 MMcf/d Guaymas-El Oro natural gas pipeline from resuming commercial operations. The 205-mile pipeline in Sonora and Sinaloa states, owned by IEnova, entered operation in May 2017, but has been inactive since August 2017 after members of the Loma de BÃ¡cum faction of the indigenous Yaqui tribe removed a section of the pipe in protest of its construction.

The plaintiffs have ten working days to appeal the judge’s ruling once they have been officially notified, although “we don’t know when exactly those ten working days will expire,” Ortiz said. Guaymas-El Oro is one of the seven contracts CFE seeks to renegotiate.

If an appeal to the ruling does not occur, IEnova would still resume conversations with the Yaqui communities in order to resolve the impasse. “We always have to ensure that we talk to the community and satisfy their concerns.”

IEnova continues to receive force majeure payments for the pipeline, despite the CFE arbitration requests.

If arbitration did eventually occur, “We’re very confident about the provisions in our contract. Our contracts are strong,” Ortiz said.

Guaymas-El Oro is one of two sections of IEnova’s Sonora pipeline system, which spans 519 miles from the border town of SÃ¡sabe, Sonora, to El Oro, Sinaloa.

The other section is the 314-mile, 770 MMcf/d SÃ¡sabe-Puerto Libertad-Guaymas pipeline, which receives gas at the U.S. border and remains operational.

The company also announced in its earnings call that it is on track to make a final investment decision this year on its EnergÃ­a Costa Azul (ECA) liquefaction project on Mexico’s Pacific Coast. Earlier this year, the project received two U.S. Department of Energy authorizations allowing Sempra to export U.S. produced natural gas to Mexico, and to then re-export liquified natural gas (LNG) from Mexico globally.

The two-phase ECA liquefaction project, a joint venture between Sempra LNG and IEnova, would be built adjacent to Sempra’s existing ECA LNG receipt terminal near the city of Ensenada.

In the second quarter, IEonva posted profit of $113 million (7 cents/share), down from $102 million (7 cents) in the same period of 2018, mainly because of noncash exchange rate effects.

Earlier this month, Fitch Ratings revised the outlook for IEnova’s ”BBB+’ rating to negative from stable.

“The modification … corresponds to the delays of CFE in issuing the proof of acceptance (constancia de aceptaciÃ³n) that would allow the Sur de Texas-Tuxpan marine pipeline to enter commercial operations, as well as the arbitration requests sent to certain natural gas pipeline developers,” IEnova said.