The European Union (EU) could reduce its dependence on Russian natural gas by around one-third within 12 months while remaining on track to meet its climate change goals, according to new analysis by the International Energy Agency (IEA). 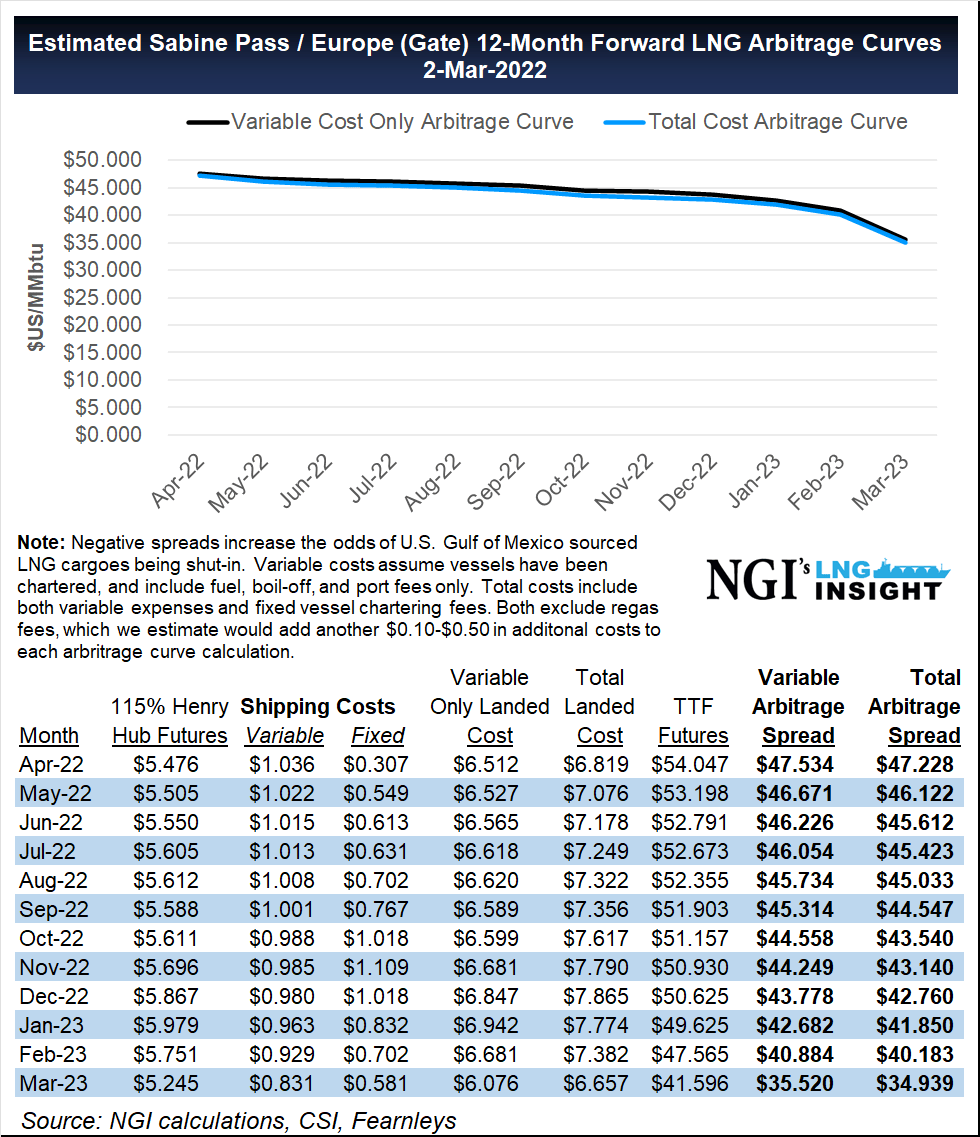 The report was published Thursday amid surging gas prices and growing supply fears in Europe as its primary supplier, Russia, continued its unprovoked assault on neighboring Ukraine.

The global energy watchdog laid out a 10-point plan for how the continent could maximize gas supply from other sources; make the most of existing nuclear and renewable generation; accelerate deployment of more renewables; and enhance energy efficiency measures.

The plan also advised the EU not to sign any new gas supply agreements with Russia. In addition, the plan recommended enacting minimum gas storage obligations to improve the system’s resilience by next winter.

The 10-point plan factors in a 20 billion cubic meter (Bcm) increase in liquefied natural gas (LNG) imports into the EU over the next year to displace molecules from Russia.

“The timely procurement of LNG can be facilitated by enhanced dialogue with LNG exporters and other importers, increased transparency, and efficient use of capacities at LNG regasification terminals,” researchers said.

The IEA team said in theory, the EU has the capability to ramp up LNG imports by 60 Bcm, given its ample regasification and pipeline capacity.

“However, all importers are fishing in the same pool for supply, so (in the absence of weather-related or other factors that limit import demand in other regions) this would mean exceptionally tight LNG markets and very high prices.”

The blueprint came on the same day that Ukraine’s gas transmission system operator said it would stop exporting natural gas in an effort to conserve supplies as fighting rages on. The decision to end exports was not impacting gas transit activity and Russian volumes moving through the country to Europe, which are allowed to continue. Gas market participants were instructed to stop moving gas from the system to cross-border points and from Ukrainian storage sites beginning with the March 4 (Friday) gas day.

“Russia’s aggression against Ukraine has led to extraordinary and unprecedented conditions and restrictions when all energy companies must focus on maintaining the natural gas supply for Ukraine and Ukrainians,” the Ukraine operator said.

“Nobody is under any illusions anymore,” said IEA’s Fatih Birol, executive director. “Russia’s use of its natural gas resources as an economic and political weapon show Europe needs to act quickly to be ready to face considerable uncertainty over Russian gas supplies next winter.”

Europe faced an energy crisis even before the invasion, which has only exacerbated the gas scarcity concerns.

The EU imported about 155 Bcm of Russian gas in 2021. The amount accounted for about 45% of the bloc’s gas imports and nearly 40% of its total gas consumption, IEA researchers highlighted.

The 10-point plan “provides practical steps to cut Europe’s reliance on Russian gas imports by over a third within a year while supporting the shift to clean energy in a secure and affordable way,” Birol said.

“Europe needs to rapidly reduce the dominant role of Russia in its energy markets and ramp up the alternatives as quickly as possible.”

In a note Thursday, Rystad Energy’s Kaushal Ramesh, senior analyst, highlighted a growing number of countries eschewing Russian natural gas amid the conflict. He cited that the UK and Lithuania had closed their ports to Russian LNG imports. Other EU countries are considering similar measures, while Germany has set aside $1.7 billion to purchase LNG from countries outside Russia.

The proposal is “fully consistent with the EU’s European Green Deal and its Fit for 55 package, paving the way for further emissions reductions in the years to come,” researchers said.

“Progress toward Europe’s net zero ambitions will bring down its use and imports of gas over time, but today’s crisis raises the specific question about imports from Russia and what more can be done in the immediate future to bring them down.”

The plan also “takes into account the need for additional refilling of European gas storage facilities in 2022,” researchers said. EU gas storage levels stood at about 29% full as of Feb. 28, versus the five-year average of 40%.

Other options, such as fuel switching from natural gas to coal and oil in the power sector, could reduce dependence on Russian gas even further, researchers said. However, these options would not align with the EU’s climate goals.

“If the fuel-switching option were to be fully exercised in addition to the complete implementation of the 10-point plan…it would result in a total annual reduction in EU imports of gas from Russia of more than 80 billion cubic meters, or over half, while still resulting in a modest decline in overall emissions,” researchers said.

Other measures in the plan include speeding up the replacement of gas boilers with heat pumps and encouraging a temporary thermostat reduction of 1 degree Celsius by consumers.

What Are The Challenges Ahead?

“Reducing reliance on Russian gas will not be simple for the EU, requiring a concerted and sustained policy effort across multiple sectors, alongside strong international dialogue on energy markets and security,” researchers said. “There are multiple links between Europe’s policy choices and broader global market balances.”

The IEA team added that strengthened international collaboration with alternative pipeline and LNG exporters, and with other major gas importers and consumers, will be critical.

The EU’s executive branch, the European Commission (EC), plans to put forward next week a pathway for Europe to become independent from Russian gas as soon as possible.

“Reducing our dependence on Russian gas is a strategic imperative for the European Union,” said the EC’s Kadri Simson, commissioner for Energy. “In recent years, we have already significantly diversified our supply, building LNG terminals and new interconnectors. But Russia’s attack on Ukraine is a watershed moment.”

France’s Barbara Pompili, minister for ecological transition, added, “More than ever, getting rid of Russian fossil fuels and of fossil fuels in general, is essential. What is at stake is both the need to accelerate the fight against climate change, and, as we can see now, the short-term energy security of the European continent.”