Weekly natural gas traders for the week ended August 25 must have felt a degree of frustration seeing little movement in prices while much of the industry’s production and transportation infrastructure stood squarely in the crosshairs of the season’s first major hurricane (Category 4) and the first one expected to make a Texas landfall since Hurricane Ike in 2008. 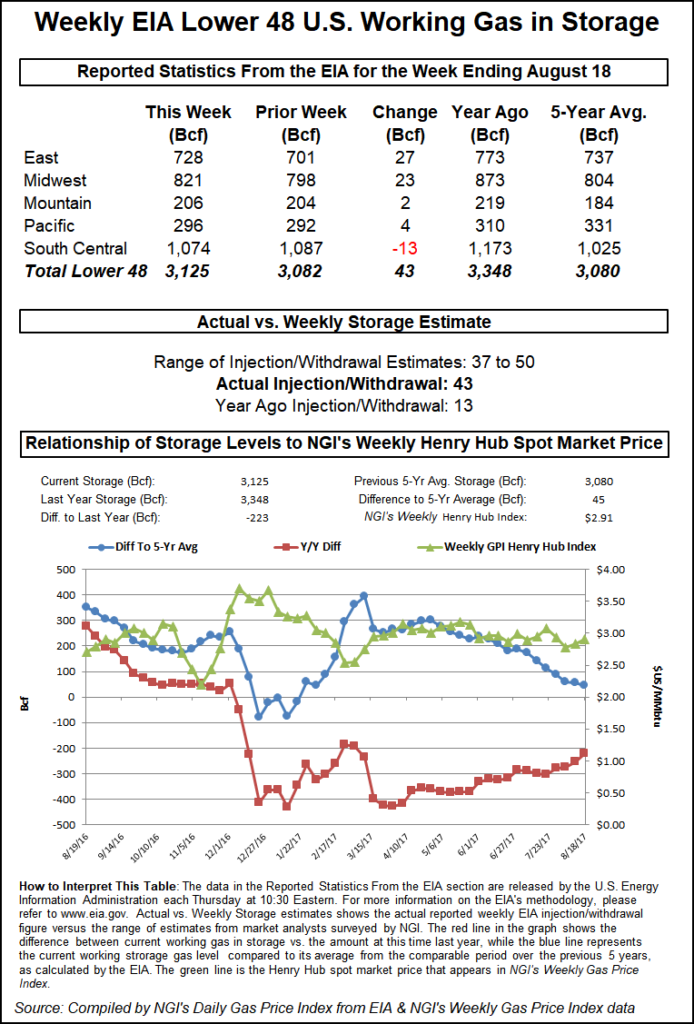 As the weekly report goes to press Hurricane Harvey is set to make landfall on the Texas coast yet the NGI Weekly National Spot Gas Average was unchanged at $2.71. With the exception of the Northeast, Canada, California and the Rocky Mountains, most individual points moved just a few pennies in either direction of unchanged.

Regionally California stood atop the leader board with a gain of 18 cents to average $3, prompted in large part by gains at the SoCal Citygate and the SoCal Border Average of 33 cents to $3.20 and 17 cents to $2.85, respectively.

Greatest regional losses were seen in the Northeast where a drop of 42 cents on Iroquois Zone 2 to $2.54 and a setback of 40 cents to $2.36 on Transco Zone 6 Non New York North helped to pull the regional average down 17 cents to $2.63.

Harvey also failed to capture the imagination of futures traders. The September contract fell all of one-tenth of a cent after the five-day trading week to $2.892.

Thursday’s Energy Information Administration (EIA) storage report took a backseat to Hurricane Harvey and the potential damage the storm could bring to Gulf of Mexico (GOM) energy infrastructure, as well as to the state of Texas, which hasn’t seen a hurricane landfall since Ike in 2008.

The EIA reported a storage increase of 43 Bcf for the week ended August 18, right in line with trader expectations, and at the close on Thursday September natural gas futures had added 2.1 cents to $2.949 and October was up 2.2 cents to $2.982. October crude oil tumbled 98 cents to $47.43/bbl.

The September Henry Hub contract had already climbed nearly 4 cents day/day to $2.974 by the time the inventory report was released at 10:30 a.m. EDT on Thursday. As forecasts showed Harvey bearing down on the Texas coast, threatening heavy rainfall and flooding, traders are having a hard time discerning any major market impact.

The reported build of 43 Bcf for the week ended Aug. 18 was slightly below the 45 Bcf build called for by a Reuters poll of analysts. The figure compares to 53 Bcf injected in the prior week and 12 Bcf injected a year ago. Total working gas now stands at 3,125 Bcf, slightly above the five-year average inventory of 3,080 Bcf but below year-ago stocks of 3,348 Bcf. The year-over-five-year surplus shrank by 10 Bcf during the report week, according to NGI calculations.

In its 7 p.m. CDT report the National Hurricane Center (NHC) reported Harvey’s sustained winds had increased to near 130 mph and it was located 35 miles east southeast of Corpus Christi, TX., heading to the northwest at 8 mph.

Harvey was a Category 4 hurricane and weakening was expected over the weekend while the center moves inland over Texas, NHC said.

Gas buyers over the broad Electric Reliability Council of Texas (ERCOT) power pool will have their hands full balancing potential outages, flooding and wind generation. “Tropical storm and hurricane conditions will be possible over southeastern portions of the pool associated with Hurricane Harvey this weekend,” said WSI Corp. in a morning report to clients. “This will include frequent, torrential showers and thunderstorms resulting in flooding rains. Amounts of 15 to 25 inches may be a conservative estimate for many areas near the coast.

“Certainly any strong winds which occur, especially close to the coast, could cause widespread power outages. Furthermore, conditions may not notably improve overall until around the middle of next week as the system only slowly meanders northward…well inland, over the northern and western parts of the pool, showers and storms will be more scattered with less significant although still locally substantial rainfall. Only the most western portions of the pool will tend to escape with more isolated activity.

“Peak wind outputs over the West should be in the 4-6GW range nearly each day. There is a chance for strong wind generation South but the tropical system, if severe enough, may also cause generation plants to be closed. Solar will be fair west and low east through the period,” WSI said.

Throughout the day Friday, reports rolled in of production losses and pipeline constraints due to Hurricane Harvey, but in a stark contrast to years past, the drop in the September contract showed a market hardly sweating the forecasts.

“I think what we’ve been experiencing over the last several years is that hurricanes now are kind of bearish, because they have more impact on lowering demand than lowering supply,” Tom Saal of FC Stone Latin America told NGI Friday. “There will be some gas shut in, but it’s probably temporary. The demand for sure is going to be lower.”

ERCOT is predicting storm damage extending through the South, South Central and Coastal weather zones in the ERCOT region. This includes the cities of Houston, Corpus Christi, Brownsville, Austin and San Antonio. The grid operator is already lining up additional repair crews from out of state.

Societe Generale said Friday that “perhaps most impactful is that Hurricane Harvey is expected to stall in Texas over several days, which could lead to severe flooding in portions of the state and materially hinder the pace of recovery, both supply and demand, following the storm’s dissipation.

“Our current expectation is that the storm will be slightly more detrimental to demand than it is to production, meaning we see the price impact as being relatively neutral, at least until there is better visibility around the storm’s wake of destruction. Given that Hurricane Harvey is making landfall over the weekend, this could lead to very active trading on Monday.”

PointLogic Energy forecast a drop in cooling demand as the storm hovers over Texas.

“…Scattered showers and gusty winds from outer rainbands will impact the southern half of the Lone Star State throughout the day with the core of the system moving in overnight,” PointLogic said Friday. “As a result, high temperatures across rain-cooled areas of this very significant demand region will only be in the low-80s, which will be upwards of 10 degrees cooler than average, while the northern half of the state will see similar conditions due to the entrance for a cool frontal boundary coming in from the north.”

“An overlap between maintenance occurring on the pipe and impending Hurricane Harvey led TGP to evacuate personnel performing maintenance in the area,” Genscape said. “As a result, all flow through Station 1 and 9 is shut down until the storm passes.”

Meanwhile, NGPL declared a force majeure impacting southbound flows on Segment 22 and through its Compressor Station 300.

Genscape estimated Friday that Gulf of Mexico (GOM) production was down about 580 MMcf/d as a result of Harvey, dropping to 2.26 Bcf/d from a two-week average of 2.84 Bcf/d. The firm forecast 14 cooling degree days (CDD) through the weekend in East Texas, compared with a seasonal norm of 19 CDDs.

“Texas inland NGL production is also down day on day by an additional 28,000 b/d. With Harvey forecast to hit Friday and then stall, dropping dangerous levels of rain on the Texas coast, production levels could continue to drop and not return to normal until at least after the weekend.”

Drilling and production activities across Texas were being curtailed in response to the storm with ConocoPhillips and Statoil ASA among the exploration and production companies that had suspended drilling activity not only in the offshore but also in the Eagle Ford Shale of South Texas.

Traders actually see opportunity in the market’s failure to respond positively to Hurricane Harvey. “While the market’s lack of bullish response to gas production disruptions within the GOM might be sending off some bearish overtures, we see at least double upside price possibilities from current levels compared to downside risk,” said Jim Ritterbusch of Ritterbusch and Associates in a note to clients.

“The lost production is reinforcing our expected support at the $2.85 area despite the fact that the curtailed output is being largely offset by an expected reduction in cooling demand that was already being reduced by a major reduction in CDD accumulation during this late summer period. And despite the fact that [Thursday’s] weekly EIA guidance was much in line with industry forecasts, the dynamic of surplus contraction was sustained.

“With the storage excess against five year averages now whittled down to only 45 Bcf, we feel that there is little margin for error for any additional supply loss due to storm activity into the GOM. With this in mind, we would look to approach the long side of the October contract on price pullbacks today into the $2.90-2.95 zone risking to below the $2.84 level in quest of a price upswing to the $3.14 area.”

Gas at the Algonquin Citygate traded Friday for weekend through Monday delivery tumbled 42 cents to $1.68 and gas headed for New York City on Transco Zone 6 parachuted 72 cents to $1.39. Deliveries to Dominion South fell 27 cents to $1.41 and gas priced at Tetco M-3 Delivery was quoted down 33 cents to $1.38.

Price declines elsewhere were not as steep. Gas at the Chicago Citygate shed 5 cents to $2.82 and deliveries to the Henry Hub changed hands 3 cents lower at $2.93. Gas on El Paso Permian gave up 6 cents to $2.59 and packages priced at the NGPL Midcontinent Pool also lost 6 cents to $2.65.