Super-spec rig specialist Helmerich & Payne Inc. has reduced its capital spending by 20% and cut back upgrades to the flagship systems because customers are concerned about where oil prices are headed, management said Wednesday. 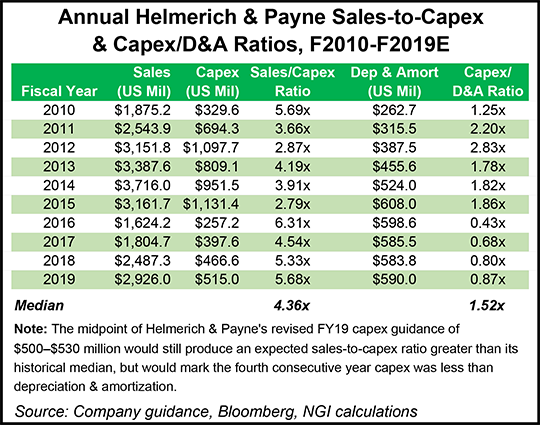 The Tulsa-based drilling operator, which works in U.S. land, offshore and overseas, delivered solid results in fiscal 1Q2019, with customer demand strong for is top-of-the-line rigs.

H&P upgraded and converted 14 more rigs to super-spec capacity during the quarter, bringing its total number of flagship FlexRigs to 221 by year’s end. However, exploration and production companies since are increasingly wary about the direction of commodity prices, particularly for oil.

“Predictably, demand for super-spec rigs this current quarter has softened largely due to oil price uncertainty and our customers’ aim to spend within cash flow,” CEO John Lindsay said.

Capital expenditures (capex) for 2019 have been reduced from initial guidance by more than 20% to $500-530 million, about $150 million lower. Roughly 35% of the capex is earmarked for super-spec upgrades, 33-38% for maintenance and 27-32% for continued reactivations and other bulk purchases.

The “recent lack of clear direction in crude prices is injecting an amount of uncertainty into some of our customers’ drilling plans for 2019,” CFO Mark Smith said. The slowing cadence of super-spec upgrades has created “a commensurate reduction in our planned capital expenditures for the year.”

H&P designs, fabricates and operates high-performance drilling rigs in conventional and unconventional plays around the world, with a fleet that includes 350 land rigs in the United States, 32 international land rigs and eight offshore platform rigs.

“We have more than 70 customers split roughly 50/50” between public and private exploration and production (E&P) companies, Lindsay said. “However, more than 80% of our active rigs are working for publicly traded E&P companies. Discussions with several customers regarding their capex outlook indicates a mix of increasing, decreasing and flat spending budgets. However, the consistent theme is discipline, principally, keeping 2019 spending within cash flow.”
Typically, Lindsay said, a few customers “seek opportunity and advantage by riding the fence, keeping one foot on the gas pedal and the other foot on the brake…With the improvement in oil prices here recently, we are seeing the pace of release is slowing.”

An oil price above $50/bbl West Texas Intermediate will continue to temper rig releases, and during the past few weeks, we have noticed an increase in customers inquiring about rig availability.”

If oil prices were to stabilize at today’s ranges or were slightly above current levels, H&P “would expect to see several FlexRigs reactivated in the March and April timeframe,” the CEO said. “If oil prices remain above $50/bbl, our extrapolated view on the industry rig count is that fewer than 100 rigs will drop in the horizontal rig market. But as we have also learned, history can be a pretty fickle indicator when it comes to predicting future rig counts.”

The FlexRig fleet is forecast to hit about 90% utilization, with pricing remaining firmly in the mid-$20,000/day range.

“Value pricing is one element of our contracting strategy, but we also have approximately 64% of our active fleet today under term contracts, up from 50% term coverage a year ago, and the average term is slightly over one year,” Lindsay said. “Shale-ready rigs are in the greatest demand, and that is where our market share is concentrated…There’s little doubt that well complexity will continue to increase, and this should drive demand toward the top-performing and safest super-spec rigs that deliver the best value and reliability at the well site.”

U.S. land segment operating income during the first quarter jumped sharply year/year to nearly $80 million from $25 million, and from $65 million sequentially, primarily on a 4% gain in quarterly revenue days and a 3% ($835) uptick in average rig revenue/day.

In the offshore operations segment, operating income during 1Q2019 fell sequentially by around $1 million to $7.2 million, with the number of quarterly revenue days on H&P-owned platform rigs decreasing by about 5%. The average rig margin/day fell from ongoing maintenance activities by $1,454 to $9,998.

Looking ahead to the second quarter, U.S. land operations are expected to see a sequential decrease in revenue days of 3-5%, representing a roughly 1-3% decrease in the average number of active rigs, based on a fewer calendar days and a “likely” exit of 223-233 active rigs.

The offshore segment should see more revenue in 2Q2019, now forecast to see revenue days up by 3% from the first quarter. That would represent an average rig count of six, as one rig returns from planned maintenance, partially offset by fewer calendar days.

Rig margin/day in the offshore is forecast to average $6,000-7,000 in 2Q2019, with one rig likely on a standby rate. Management contracts should generate another $4-5 million in operating income as one of the rigs moves to a reduced cold stack rate, as planned.