The Port of Corpus Christi in South Texas, where a building boom is underway from oil and natural gas growth fueled by the Permian Basin and Eagle Ford Shale, is readying for another big expansion designed to transport energy to Mexico. 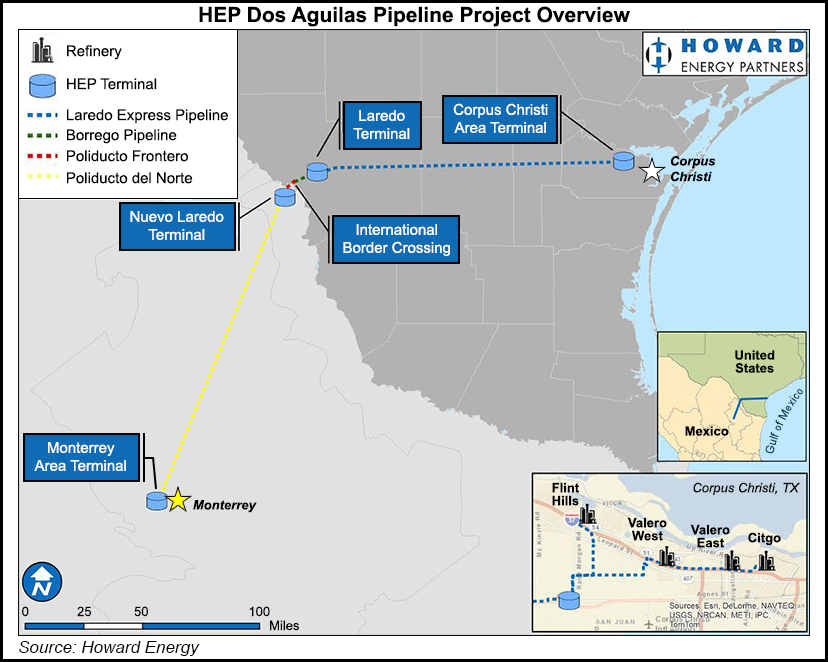 The port, now the fourth largest in terms of tonnage in the United States, has approved a 30-year lease with Howard Energy Partners for 41 acres of land along the coast. Howard Energy has plans in the works to transport U.S. oil and gas to Mexican consumers.

“This lease marks a strategic and significant expansion of our terminal network, not only for refined products but for crude oil,” said Howard Energy President Brad Bynum. The partnership also expects to expand its relationship in the future with the port.

Under the 30-year lease approved by the port’s board, subsidiary Maverick Terminals Corps LLC would construct a rail terminal, petroleum products storage facility and oil dock on the site.

The rail line and storage facility would be designed and operated by Maverick on the site, which lines the north side of the Corpus Christi Channel.

Port authorities in turn agreed to design and construct Oil Dock 20, which would provide Mexico with oil via rail until the company has completed the proposed Dos Aguilas pipeline.

Last year Howard Energy subsidiary Dos Aguilas Pipeline LLC completed a successful open season on for the project, an open access system of refined products terminals and pipelines that would run from Corpus Christi to northern Mexico. Pending approvals, the project could be in service the first half of 2018.

The system as designed would include 287 miles of 12-inch pipeline and Texas terminals in Robstown and Laredo. The pipeline would offer services for gasoline, ultra-low sulfur diesel, and jet fuel to northern Mexico markets through deliveries to Nuevo Laredo, Tamaulipas and Monterrey, Nuevo Leon.

Both the pipeline and train line from Corpus would connect the Coastal Bend area of South Texas to Monterrey, Mexico.

“Two to three train units a week should be needed to keep up with demand until the pipeline can be built,” according to Howard Energy, which has ports in the South Texas border town of Brownsville, and east of Houston in Port Arthur.

The San Antonio-based partnership already is helping to finance Impulsora Pipeline LLC, designed to carry natural gas from Texas to Mexico. It currently owns and operates more than 500 miles of pipeline, gathering production from the Eagle Ford, Escondido, Olmos and Pearsall formations of South Texas. In addition, it has 145 MMcf/d of amine/treating capacity and more than 9,000 hp of compression. In June WPX Energy Inc. and Howard Energy also joined forces to develop natural gas and crude oil gathering and processing infrastructure in the Stateline area of the Permian Basin’s Delaware sub-basin in West Texas.

In South Texas, the partnership owns and operates a 200 Mcf/d cryogenic processing plant in Webb County, a 10,000 b/d stabilizer facility in Live Oak County and a 220,000 bbl liquids storage terminal near Brownsville. In addition, it owns more than 100 miles of natural gas gathering pipeline in Pennsylvania’s Lycoming and Bradford counties.

The Corpus Christi dock is to have Suezmax tanker capacity, tankers that are the largest ships capable of moving through the Suez Canal.

“The Port Corpus Christi has secured its position as the No. 1 crude oil export port in the United States,” said Port Chairman Charles W. Zahn. “This major investment from Howard Energy Partners represents a shining example of why the Port of Corpus Christi is the Energy Port of the Americas.”

The Houston Ship Channel continues to be the top conduit for oil and gas projects, but the Coastal Bend of Texas is gaining more share. ExxonMobil Corp. and its Saudi Arabian partner agreed in April to develop a world-class ethane steam cracker near Corpus Christi, a facility that if given final approval would be able to produce 1.8 million metric tons/year (mmty) of ethylene.

Another project underway is by Corpus Christi Liquefaction LLC, a subsidiary of Cheniere Energy, which is developing an estimated $13 billion liquefied natural export terminal with production capacity of up to 13.5 mmty. Occidental Petroleum Corp.’s Oxy Ingleside Energy Center LLC, which began oil loading last year, is sited at the former Naval Station Ingleside in San Patricio County. Pipelines scheduled to terminate around Corpus Christi, which is in Nueces County, include NAmerico Energy Holdings LLC’s Pecos Trail Pipeline Co., a 468-mile intrastate gas system originating in the Permian. DCP Midstream LP and a unit of Kinder Morgan Inc. are building the Gulf Coast Express Pipeline Project to carry gas from the Permian to Agua Dulce, which is near Corpus in Nueces County.

In addition, Buckeye Partners LP is considering the South Texas Gateway, an oil pipeline that would carry Permian crude to Corpus for refining and export. Epic Pipeline Co. LLC also in March began offering capacity for a proposed crude/condensate pipeline that would run from the Permian to Corpus.