Hess Corp. is selling its retail business, which includes more than 1,300 gasoline stations and convenience stores along the East Coast, to Marathon Petroleum Corp. (MPC) for $2.6 billion as part of its strategy to focus on E&P activities, the company said Thursday. 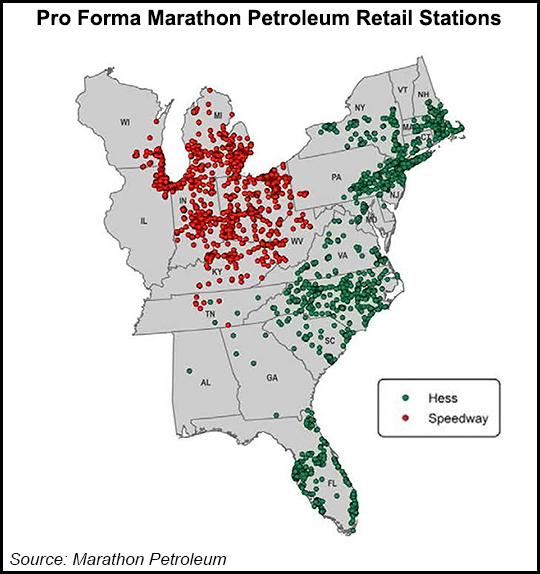 Hess said it will use proceeds from the sale of Hess Retail Corp. to buy back stock. The company increased its share repurchase authorization, which it launched in August 2013, from $4 billion to $6.5 billion. To date, the company has repurchased about $2.8 billion in stock.

“The sale of our retail business marks the culmination of our strategic transformation into a pure-play exploration and production company,” said CEO John Hess.

The deal is expected to close by year-end, subject to customary conditions.

Plans to sell Hess Retail and its 1,342 gas stations and stores first materialized in March 2013, when Hess agreed to transform itself into a pure-play exploration and production (E&P) company. The plan advanced when the company filed paperwork with the U.S. Securities and Exchange Commission (SEC) to form Hess Retail Corp. in January (see Daily GPI, Jan. 9; March 5, 2013).

The plans to sell the retail business were supported by Hess’ second-largest shareholder, Elliott Management Corp., a holding company of hedge funds founded by activist shareholder Paul Singer. Last year, Elliott and Hess engaged in a proxy fight over the future of the company, with the former advocating a total overhaul (see Daily GPI, March 27, 2013).

Since then, Hess has sold several of its assets. The company agreed to sell its energy marketing business for $1.03 billion to a Centrica plc North American subsidiary and its dry gas acreage in the Utica Shale for $924 million to an undisclosed buyer in July 2013 and January 2014, respectively (see Daily GPI, July 31, 2013; Shale Daily, Jan. 29).