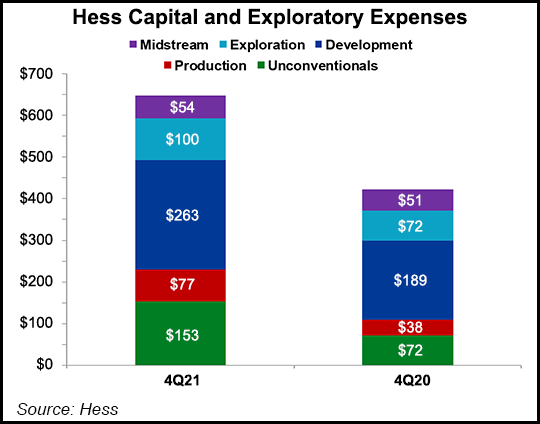 The New York-based producer is ramping up Bakken activity after adding a third rig last September. Previously it had slashed its rig count from six to one because of the coronavirus pandemic. A fourth rig could potentially come online next year, executives said in an earnings call Wednesday.

The company can generate “attractive returns” in the Bakken at $60/bbl for West Texas Intermediate (WTI) oil, executives said. They called the Bakken a “cash engine.” In 2022, Hess will drill 90 Bakken wells and bring approximately 85 new wells online.

On the call, CEO John Hess highlighted efficiency gains in the face of inflation. In 2021, the firm’s drilling and completion cost per Bakken well averaged $5.8 million, 6% lower than in 2020. Hess sees the company offsetting anticipated inflation “through lean manufacturing and technology driven efficiency gains.” He sees drilling and completion costs remaining flat in 2022.

This year “marks an inflection point in the execution of our strategy, as we go from investment mode to return of capital mode, while still being able to invest to grow our business,” Hess said.

Hess expects the company’s producing assets in the Bakken, deepwater Gulf of Mexico, Southeast Asia and Guyana to be “free cash flow generative” in 2022.

The CEO called offshore Guyana the “key to our strategy.” In Guyana’s offshore Stabroek block, where Hess is a 30% partner with operator ExxonMobil, the Fangtooth and Lau Lau discoveries were recently announced. Gross discovered recoverable resource estimates in the Stabroek block now are over 10 billion boe.

Hess said the asset is “positioned to be one of the highest margin, lowest carbon intensity oil developments globally.”

Exploration and production capex in the fourth quarter was $593 million compared with $371 million in the prior-year quarter.

Executives said they see oil demand returning to pre-Covid levels within a month, but that overall U.S. production would remain about 800,000 b/d below pre-pandemic levels through the end of this year.