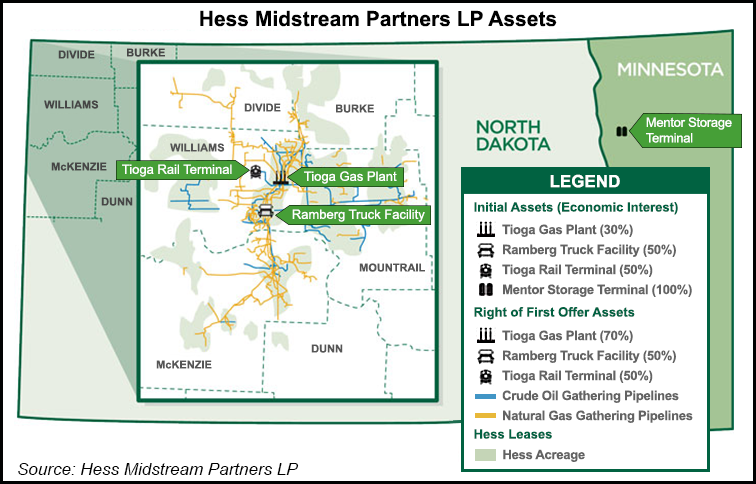 According to documents filed with the U.S. Securities and Exchange Commission (SEC), the Houston-based subsidiary submitted Form S-1 on Wednesday [No. 333-198896]. The partnership intends to list common units on the New York Stock Exchange under the symbol “HESM.”

The S-1 filing did not indicate how many units would be offered, nor did it list a price range for the offering. Hess announced plans to form a master limited partnership principally for its midstream assets in the Bakken Shale in July, with eventual plans for an IPO (see Shale Daily, July 31).

The filing said Hess Midstream holds a 30% economic interest in HTGP Opco, which owns the Tioga natural gas processing plant in Tioga, ND. The Tioga plant has cryogenic processing capacity of 250 MMcf/d and an integrated fractionation capacity, which includes ethane capacity of 60,000 b/d.

“Hess has announced that it is currently evaluating a debottlenecking project to increase the plant’s processing capacity from 250 MMcf/d to 300 MMcf/d,” the subsidiary said. “Additionally, we are also constructing a CNG [compressed natural gas] terminal at the Tioga Gas Plant that, when completed, will have a CNG compression capacity of 17,000 diesel equivalent gallons per day.”

According to Hess Midstream, the Tioga Gas Plant includes the North Dakota Natural Gas Pipeline, a 10.75-inch diameter residue gas pipeline that runs about 60 miles and connects to Northern Border Pipeline at Cherry Creek, ND. The maximum capacity at the interconnection is 65 MMcf/d.

Hess Midstream Partners also owns Mentor Holdings, which in turn owns the Mentor Storage Terminal in Mentor, MN. The facility is a propane storage cavern with about 328,000 bbl of working storage capacity, as well as rail and truck loading.

Goldman, Sachs & Co. and Morgan Stanley are acting as joint book-running managers for the proposed IPO.

Last May, Hess agreed to sell its retail business to Marathon Petroleum Corp. for $2.6 billion as part of its strategy to focus on exploration and production activities (see Daily GPI, May 23). Hess also sold its energy marketing business for $1.03 billion to a Centrica plc North American subsidiary and its dry gas acreage in the Utica Shale for $924 million to an undisclosed buyer in July 2013 and January 2014, respectively (see Daily GPI, July 31, 2013; Shale Daily, Jan. 29).