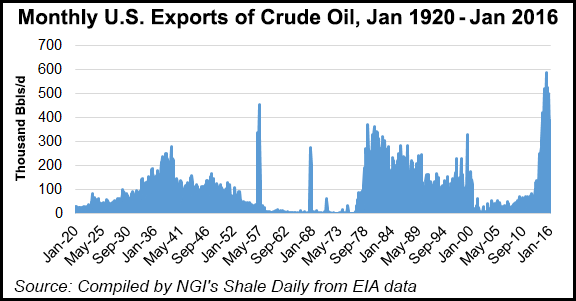 Hess would not disclose the buyer but said the crude would be refined in Europe after being shipped in tankers from St. James, LA, and being sent from the Hess Tioga loading facility in North Dakota by rail. “Crude was delivered this week to Rotterdam,” a Houston-based Hess spokesperson told NGI’s Shale Daily on Thursday.

In regard to future export plans, the Hess spokesperson said that “exporting Bakken crude expands the list of customers that can help us achieve our goal of seeking the highest value. Where the crude goes is determined by where we get the best value.”

“At this point, we haven’t heard from any other [producers] on their plans [regarding exports], though I know many were supportive of lifting the export ban [see Shale Daily, Dec. 16, 2015],” said a spokesperson for the North Dakota Petroleum Council (NDPC), Tessa Sandstrom, who confirmed that Hess had sent the first export shipments.

Sandstrom said other exports from the Bakken may take additional time as producers develop relationships and “find the right markets.” NDPC is not involved in marketing negotiations, she said.

NDPC has no historic records or past indicators on whether North Dakota crude in earlier decades in the 20th century was ever exported outside of North America since the first commercial well was drilled in the state (Clarence Iverson No. 1) in 1951.

Along with Hess, other major Bakken producers, such as Continental Resources and ConocoPhillips, have supported lifting the crude oil export ban. Hess’ first well was drilled in 1951 near Tioga, the site of its current loading and processing facilities.

Hess touts its North Dakota operation as “competitive with the best shale oil plays in the world,” according to its website. It cites the application of its so-called Lean manufacturing techniques on its wells as being “among the lowest cost and most productive in the Bakken.”

In 2015, Hess sold a 50% interest in its Bakken midstream assets and formed a joint venture with Global Infrastructure Partners, which resulted in total cash proceeds to Hess of $3 billion (see Shale Daily, June 11, 2015). The midstream joint venture assets include the Tioga Gas Plant, the Tioga Rail Terminal, a crude oil truck and pipeline terminal and the crude oil and natural gas gathering systems in North Dakota, and the rail terminal was essential in its initial exports.