North Dakota’s Bakken Shale will experience 10% growth in oil and natural gas activity next year, with steady but more moderate growth in the two subsequent years, according to Lynn Helms, director of the state’s Department of Mineral Resources. 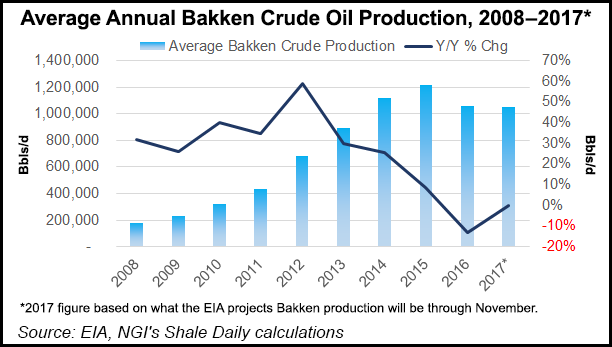 Helms made the predictions in his annual talk to county officials gathered Thursday as part of the newly named Western Dakota Energy Association, which formerly was the North Dakota Association of Oil/Gas Producing Counties.

Helms said there have been four approved pilot tests for enhanced oil recovery (EOR), calling it “extremely important” to the state’s oil/gas production. “Finding a successful method will extend it in the life of production and jobs,” Helms said.

EOG Resources is the first company to confirm that it has “significantly” increased oil production from unconventional plays through EOR, he said. EOG’s field test program began four years ago, and production increased in 15 wells, resulting in a 30-70% reserve gain. Last year a 32-well test added 300,000 bbl at a $6/bbl finding cost. “Work is ongoing on 100 wells in six areas this year,” Helms said.

For every dollar invested, EOG has created $2 of increased net present value/well, according to Helms’ summary. There is an additional per-well capital cost averaging $1 million, and the process employed uses associated gas for each of the wells. Production response comes in two to three months, Helms said.

The increased oil production comes when several factors are in play, according to Helms, who summarized them as:

North Dakota has more than 14,000 active wells with authorizations to increase density by another 13,154 wells. In addition, there are nearly 1,500 inactive wells, nearly 863 waiting on completion, and nearly 2,000 newly permitted wells. In total, there are more than 31,000 wells in the state.

Helms said that contrary to other major U.S. basins, Bakken oil production per-rig increased through September this year compared to the same period in 2016.

“Overall, I’m very optimistic about the oil outlook for western North Dakota,” he said. “Even though the Bakken play continues to compete for capital against other shale plays, we still have rigs stored here in North Dakota ready to be mobilized as oil prices improve.”