It was another wild and wacky week of spot gas trading across the country. There were wide variations in both price changes and absolute price levels and the Midwest and Midcontinent were the Kings Of The Hill. 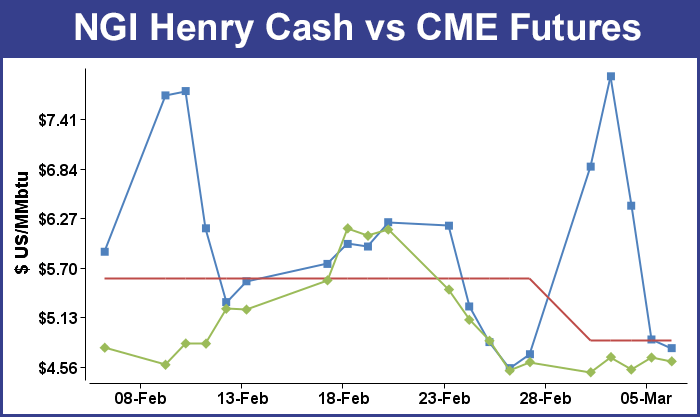 The NGI Weekly Spot Gas Average nationally was $8.18, down $1.15 from the previous week, but the Midwest and Midcontinent both topped that with the Midwest ending the week averaging $16.34, down $6.45 and the Midcontinent coming in at $9.24, off $2.78. All points in the Midwest posted multi dollar losses.

Of the more actively traded points, the Midcontinent got top honors with Panhandle Eastern registering the week’s greatest gain of $2.02 to average $7.62, but the greatest drops were also found in the Midcontinent with Northern Natural Ventura plunging $10.88 to $13.87, and Northern Border Ventura right behind with a loss of $9.89 to $14.53.

Regionally the Northeast was also in the red showing a loss of $1.48 to $9.07, but all other regions were solidly in the black.

April futures finished nine-tenths of a cent higher than a week ago at $4.618.

Futures traders are looking for stronger prices. “We are maintaining a forecast for some fresh price highs. But, at the same time, we feel that these highs will need to be established next week if they are going to develop,” said Jim Ritterbusch of Ritterbusch and Associates in closing comments Friday. “In other words, the time window for a sizable price advance of more than 5% or so appears to be closing with the approach of the shoulder season. This is why we have adjusted stop protection upward to just below the $4.50 level.

“But, at the same time, we still feel that the process of bringing supply to market via y over y output gains of more than 3%, enticing increased imports into the country and spurring power plants to consume more coal will all require a stronger curve structure than currently exists. Implied is a continued preference for bull spreads across the 1 year portion of the curve.”

Analyst Alan Lammey of WeatherBELL Analytics sees most of the weather premium out of the April contract. He senses that the market is balancing “the remaining cold for the duration of March in relation to the ending natural gas storage ‘carry-out’ verses the calendar, which says that ‘spring time’ is on the horizon. While the market may have already eliminated the ‘winter premium’ from the prompt-month contract, there are still plenty of fireworks ahead over the next two to three weeks, which could lead to lots more price volatility.”

In Thursday’s trading the primary futures price driver was the weekly Energy Information Administration storage report. It reported a withdrawal from inventories of 152 Bcf, about 15 Bcf greater than what traders were expecting. The market rose, but still stayed within recent trading parameters. At the close April had added 13.9 cents to $4.662 and May was up by 11.9 cents to $4.603.

Futures traders thought the market would have registered a more bullish response to the 152 Bcf inventory draw. “We still have a 20 cent range from $4.50 to $4.70 and you think it would have popped a little more with that kind of number,” said a New York floor trader.

The 152 Bcf draw puts inventories now at 1,196 Bcf and are 908 Bcf less than last year and 758 Bcf below the 5-year average. In the East Region 82 Bcf were withdrawn and in the West Region 27 Bcf were pulled. Inventories in the Producing Region fell by 43 Bcf.

The Producing region salt cavern storage figure decreased by 8 Bcf from the previous week to 88 Bcf, while the non-salt cavern figure fell by 35 Bcf to 393 Bcf.

In Friday’s trading gas for weekend and Monday delivery was also highly varied. A major interstate pipeline declared a force majeure, and although earlier polar vortices did not seem to be in play, many traders were not desirous of being short gas going into the weekend with cold weather clearly an added risk.

Multi-dollar gains seen in the Great Lakes and Midwest easily offset weakness in the Rockies, California, Gulf Coast and parts of the Northeast. Futures prices stayed within their recent trading range and at the close April was off 4.4 cents to $4.618 and May had declined 3.6 cents to $4.567.

In Friday’s spot market trading Great Lakes and Midwest buyers were kept on edge as a major pipeline bringing gas from the south declared a force majeure. NGPL said on its website that “a force majeure event has occurred at Compressor Station 102, located in Beaver County, OK. Natural has experienced an unexpected outage due to a mechanical failure on one of the compressor units requiring Natural to reduce the throughput capacity northbound out of the Midcontinent Zone. The scheduling constraint will be at Compressor Station 103 (the beginning of Segment 11 of Natural’s Midcontinent Zone). Any gas received south of Station 103 for delivery north of Station 103 (including transport associated with storage withdrawals) will be impacted.”

Traders also had to deal with an anticipated sharp temperature drop over the weekend, which also made precautionary purchases viable. Forecaster Wunderground.com predicted the high in Chicago Friday of 51 would plunge to 29 Saturday before making it back to 46 on Monday. The seasonal high in Chicago for mid March is 43. In Detroit the Friday high of 47 was forecast to drop to 33 on Saturday before reaching 42 on Monday. The normal high in Detroit is 40.

The National Weather Service in Chicago reported that “a cold front currently stretching from central Wisconsin into south central Iowa will drop southeast across the forecast area this evening [Friday]. Over the weekend, it said, “a decent push of cold air behind the departing cold front will drive temperatures back down into the -7c to -9c range Saturday afternoon resulting in surface highs that struggle to reach the freezing mark.”

Forecasters see a slight moderation in the near term. WSI Corp. in its Friday morning report said, “[Friday’s] six-10 day period forecast has trended milder over the northern Plains and Northwest when compared to yesterday’s forecast. Forecast confidence is considered [reaching] just average standards as models show good agreement during the early half of the period, but then technical differences develop later in the period.”

Risks to the forecast include the models “struggling with the mean evolution and propagation of another cut-off low-pressure system digging over the West early. If the European op is correct, temperatures would likely run warmer than forecast over the East late in the period.”