Dry natural gas production in the Lower 48 has continued to soar to new heights, closing in on 81 Bcf/d in recent days, but persistent storage deficits and lingering heat in some regions have market bulls going the distance in an ongoing battle for natural gas prices. August forward prices rose a penny on average between July 5 and 11, according to NGI’s Forward Look. 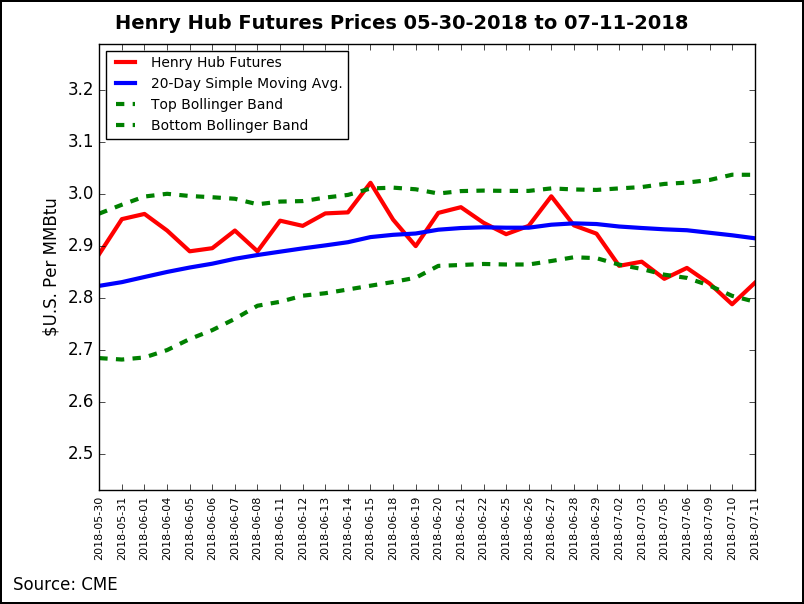 The week could be characterized by back-and-forth action at the front of the Nymex curve as the August futures contract would edge up a few cents one day, only to retreat just as much the next. The prompt month eventually settled Wednesday at $2.829, down 1 cent from July 5.

The rest of the Nymex futures curve posted similarly minute changes as the tug-of-war between hot weather and record production continued. On the weather front, the latest models showed weather systems tracking across the Great Lakes and East beginning in the middle of the July 16-20 work week and continuing through the following week, making for weather conditions that just aren’t hot enough, according to NatGasWeather.

The latest data continued to indicate swings in demand for the last week of July with periods of strong national demand intermixed with only moderate demand, the forecaster said. “But for weather patterns to again become solidly bullish, it will take the core of the hot upper ridge to shift back over the eastern U.S. and the latest data again failed to trend any hotter going into the last week of July.”

There remains potential for the hot ridge to expand eastward to begin August, but with more to prove. “The longer it takes for hotter maps to gain traction over the East, the more likely the natural gas markets get impatient by expecting record production will steadily ease deficits starting in a couple weeks.”

The Energy Information Administration (EIA) on July 5 reported storage inventories at 2,152 Bcf for the week ending June 29, versus 2,869 Bcf last year and five-year average inventories of 2,645 Bcf. Following the report, Mobius Risk Group said “going into the summer, the market was anticipating that storage deficit to be down closer to 500 Bcf by this point.”

For the week ended July 6, The EIA on Thursday reported a net 51 Bcf injection into Lower 48 gas stocks, lower than the 59 Bcf injected last year and well shy of the five-year average 77 Bcf build. The report period saw plenty of heat in key markets but also posed questions regarding potential demand destruction from the mid-week Fourth of July holiday.

Prior to EIA’s latest report, major surveys had showed the market looking for a build about 4-5 Bcf larger than the actual figure. A Reuters survey of traders and analysts on average had showed respondents anticipating a 56 Bcf build, with responses ranging from 47 Bcf to 67 Bcf. A Bloomberg survey had produced a median 55 Bcf injection, with a range of 34 Bcf to 67 Bcf. Intercontinental Exchange EIA Financial Weekly Index futures had settled at 49 Bcf Wednesday, below the major survey averages and the actual figure.

The firm said it also did not see the print as too bearish, coming in slightly below its expectation and likely allowing for some support from $2.75-2.77. “Rather, it confirms a market that could still weakly bounce short-term, but which has strong resistance with risk skewed lower.”

For its part, NatGasWeather said the market likely viewed the reported injection as neutral with the ICE swap, which was lower on the estimate range at near 50 Bcf. “Aug 2018 has tested $2.80 numerous times this week, so that seems the level bulls are trying to hold and bears want to reclaim,” the forecaster said.

The Nymex August futures contract eventually settled Thursday at $2.797, down 3.2 cents on the day.

While most pricing locations across the country traded in line with the Nymex futures curve, Permian Basin hubs posted substantial increases late in the week as regional production declined considerably.

Genscape Inc. on Wednesday said it was seeing continued production drops in the Texas portion of the Permian Basin as well as in Oklahoma, which appeared to be related to a maintenance event on the Atmos Intrastate Pipeline at its Maryneal Compressor Station, which sits on the border of the zones that bring gas from the western area to the eastern part of the pipeline system.

“Atmos has not publicly stated when the maintenance will conclude, however, rumors around the market indicate a late August end date,” Genscape natural gas analyst Nicole McMurrer said.

Not to be outdone, Southern California pricing also put up substantial gains as the region experienced scorching temperatures in recent days. Southern California Gas Co. (SoCalGas) system-wide demand spiked to 2.75 Bcf/d on July 6, its highest level since mid-March. Since then, it has remained elevated, averaging 2.497 Bcf/d through July 10, which is nearly 450 MMcf/d above the previous average baseline of 2.053 Bcf/d, according to Genscape.

SoCalGas import capacity is still severely constrained because of ongoing outages on L235 and L3000. Although the working capacity at Aliso Canyon has been increased by nearly 10 Bcf, it is still only to be used after other mitigation measures have been employed.

Indeed, while dealing with heat-related outages that affected nearly 50,000 of its 1.5 million electricity customers, the Los Angeles Department of Water and Power (LADWP) did not tap any of the available, albeit limited, supplies in the 3,200-acre Aliso storage facility, an LADWP spokesperson told NGI. LADWP set daily record power sendouts on two days between Friday and Tuesday (July 6-10).

SoCal Citygate basis prices have spiked considerably during the recent heat wave, reaching their highest levels since mid-February (when prices set all-time highs, more than $16 above the Hub). “SoCal Border basis has also jumped in response to the heat wave and constraints, and in the last week, it too has posted its two highest marks since mid-February,” Genscape natural gas analyst Joe Bernardi said.