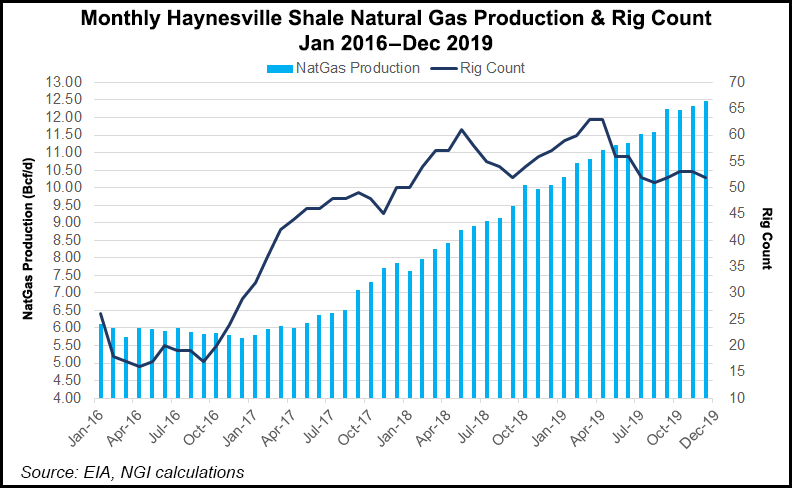 Already running near 100% of its capacity, the plant is a “strategic complement” to the Enterprise value chain as NGL produced at the plant will be transported on the Panola Pipeline to Mont Belvieu, TX, for fractionation services.

“The addition of this new natural gas processing plant demonstrates Enterprise’s commitment to investing in the world-class natural gas shale in East Texas and Louisiana,” said Enterprise’s CEO of the general partner. “The Bulldog facility, along with other growth projects under construction in the region, aggregates natural gas on our system and creates an opportunity for future expansion of our natural gas value chain from East Texas to the Gulf Coast. This project is also an example of our success in leveraging opportunistic, strategic acquisitions.”

In its latest Drilling Productivity Report, the Energy Information Administration said that oil production in the Haynesville was expected to remain flat in February at around 40,000 b/d, while natural gas production was expected to be marginally higher month/month. Six drilled but uncompleted wells were added in the shale play in December, bringing the number up to 214.

Enterprise earlier this week started commercial operations at another gas processing plant in the more active Permian Basin. The Mentone plant, the seventh in the Delaware sub-basin, has the capacity to process 300 MMcf/d of natural gas and extract more than 40,000 b/d of NGL. The latest addition brings total capacity in the Permian to more than 1.6 Bcf/d of natural gas processing and more than 250,000 b/d of NGL extraction.

The Houston-based midstreamer is scheduled to release its 4Q2019 earnings on Thursday (Jan. 30).