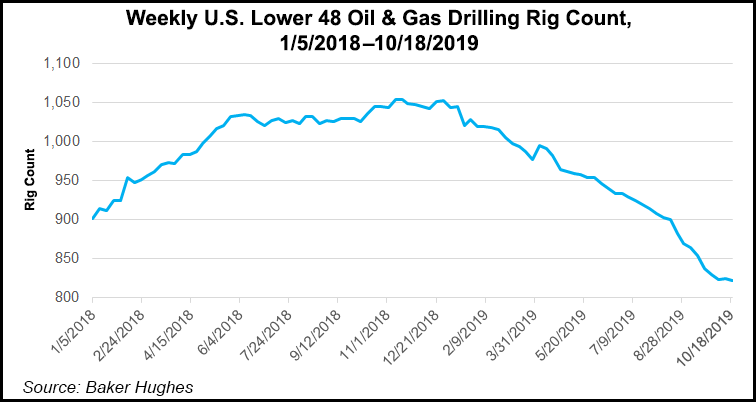 Following a slow third quarter, CEO Jeff Miller told analysts Monday that the domestic fracturing business is forecast to decline further in the final three months, with margins down by 125-175 basis points and revenue plummeting by low double digits.

“Feedback from our customers lead us to believe that the rig count and completions activity may be lower than the fourth quarter of last year,” Miller said during a quarterly conference call.

North American revenue accounts for more than half of the global total, and it was off 21% year/year and 11% sequentially. Completion and production activity in North America slumped by 16% from a year ago, and more land equipment was idled.

Supply and demand “uncertainties” weighed in the third quarter, in part from the “ongoing U.S.-China trade tensions and negative economic data out of Asia and Europe,” Miller said. While international growth overall is continuing at a steady pace, the outlook is not solid in North America, where “customer spending has decreased and was largely concentrated in the first half of the year.”

The Lower 48 rig count declined by 11% from the second to the third quarter “for the first time in 10 years. And while historically the third quarter used to be the busiest in terms of hydraulic fracturing activity in the U.S., stage counts declined every month this quarter.”

As a result, the market for drilling/completion services in North America “softened during the third quarter, impacting service company activity; Halliburton was no exception.”

“We are stacking equipment,” Miller said. “In the third quarter, we stacked more equipment than we did in the first six months of the year. While this impacts our revenues, we would rather err on the side of stacking and work for insufficient margins and wear out our equipment.”

At the same time, the Houston oilfield services giant is reducing costs. During the recent downturn, Halliburton reduced costs by $1 billion in 2016, Miller noted. It is doing the same today by reorganizing, reducing staff and lowering fixed costs in North America.

Halliburton also is “aligning with the right customers…that are spending and that value our services” by integrating well completions with wireline and fracturing services.

“It is one thing to have both product lines and another thing to integrate them technically and culturally and achieve lower cost on location,” he said. Halliburton also is upgrading technologies to improve efficiencies and reduce personnel on location.

“This technology integration, which is hard to duplicate, improved customer efficiency, but more importantly, it improves our margins,” which he said is the “right approach” for the North American market.

For the final three months, Halliburton expects more of the same.

“We expect customer activity to decline across all basins in North America land, impacting both our drilling and completion businesses,” Miller said.

The end-of-year holidays and potential weather impacts “are the usual culprits,” but U.S. exploration and production (E&P) companies are committed to cash flow generation. An “oversupplied” natural gas market and “concerns about oil demand” also lead to potential “softness in 2020.”

E&P “budget exhaustion” already has begun, Miller said. Through the end of the year, Halliburton is planning more cost reductions. Estimates are still being finalized, but it expects to capture around $300 million in annualized cost savings over the next few quarters.

The “narrative for North America” is changing. While the cadence of activity may remain the same over the near term, Miller said there are some trends Halliburton is scrutinizing in the U.S. land market. The No. 1 item is equipment attrition.

“Given demand deceleration, the service industry has adjusted accordingly and cut capital spend this year,” he said. “There were hardly any new equipment additions, and maintenance spending has been severely curtailed.”

At the same time, service intensity in the fields has not slowed as multi-well pad drilling has continued, with lateral lengths extended and proppant loading increased.

“The direct result of higher service intensity, especially in terms of hours pumped per day, is the increase in maintenance frequency. This should accelerate the long-awaited equipment attrition from the market, both voluntary through stacking and involuntary.”

There is less horsepower available in the market, and service operators have begun cannibalizing stacked equipment for parts rather than paying for replacement components because of budget constraints.

“We expect attrition to continue into 2020,” Miller said.

U.S. E&P customers also have changed their buying behavior and now are contracting for services and integrated packages to gain cost savings. Miller said this is how the North Sea market evolved.

Halliburton now is working on integrated projects in the Permian Basin and the Bakken Shale.

One other trend the company is watching is the deceleration of incremental U.S. production growth brought about by E&P capital expenditure (capex) discipline.

“The record breaking 2018 growth will not be replicated in 2019,” Miller said. “In fact, current projections for 2020 indicate a further decline in production from the current year estimates to maximize production for every capex dollar they spend. Operators will require technologies that can improve both efficiencies and well productivity.

“Instead of counting stages, they want to make every stage count. For this, I believe they will turn to Halliburton.”

After Years of Turmoil, PG&E Looks to New Playbook