Resilient activity in the U.S. land business between January and March helped power Halliburton Co. to a 34% increase in revenues, and it broke a record for stages per spread in March, the CEO said Monday. 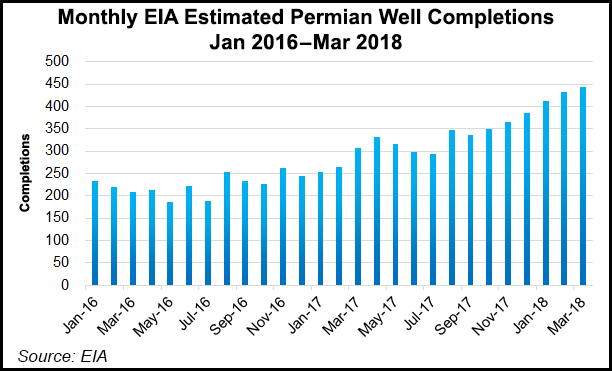 “Today, all eyes are on North America as it continues to play a larger role as a global producer,” the CEO told investors. “Activity in the U.S. remains resilient as our customers have a large portfolio of economically viable projects in today’s commodity price environment. We expect our customers to remain busy through the rest of 2018, creating significant demand for our Services.”

The steady rig count growth and “completions intensity is improving demand across all of our product service lines,” Miller said. “In addition, we believe the pressure pumping market is undersupplied today and will remain tight for the rest of 2018.”

Incremental horsepower is coming into the market, but the undersupply should persist, he said, as wear and tear is degrading existing equipment with more fracturing (fracking) stages.

“I’ve been saying this for a bunch of quarters; degradation is real,” he said. “Roughly 50% of announced horsepower does not translate into new crews. I know this because we analyze the difference between horsepower additions announced and the related number of crews that are produced. This means that about half the newbuild equipment is being used to replace or add to crews already in the field.”

Degradation is driven by service intensity, which translates into equipment not lasting as long as intended and more maintenance costs.

“Maintenance costs are growing, and the costs are real,” said the CEO. “Today, we pump three to four times the sand volume through equipment compared to 2014. We’ve moved away from gel-based fracks to slick water fracks, increasing the abrasion on our equipment. At the same time, we increase the pumping rate, compounding the wear and tear on equipment.

Halliburton has overcome challenges with its proprietary equipment and preventative maintenance technology, which has reduced its maintenance expenses.

“The expansion in our operating margins over the last year demonstrates our superior ability to manage through the increased maintenance,” Miller said. Halliburton expenses its maintenance costs, in contrast to some competitors that capitalize their costs.

U.S. activity today remains strong, leading to a squeeze across the supply chain, said the CEO.

“The three most significant areas of supply chain tightness that we see are rail, trucking and labor.”

For example, the first quarter was a tough one for sand delivery, as wintry weather delayed rail shipments to key operating areas, including the Permian Basin.

“I learned more about train logistics than I ever dreamed I would, proof that getting to the future first is not always fun,” Miller said. However, “this issue is temporary and is behind us.”

The U.S. rail system is experiencing high demand because of strong economic activity.

“This increased overall demand is adding stress to the rail system, while at the same time, our industry is attempting to move more and more sand every quarter. This stress is making the timing of deliveries less predictable.”

The ultimate solution, he said, is increasing the use of local sand, an area that Halliburton expects to increase in the latter half of the year.

Another big bottleneck is in trucking, according to the CEO.

“The issue today is not in tractors and trailers. It’s finding qualified drivers and dealing with congested infrastructure.”

The labor market also is tight. In some oil and gas basins where Halliburton operates, the unemployment rate is “just above 2%,” Miller said. “That is tight. We have the advantage of being able to recruit nationally to find qualified field personnel. However, given the level of activity today, there will likely be wage inflation and additional pricing will be necessary for cost recovery.”

All of the activity means that North America’s role in the global supply equation is evolving, he said.

Nothing is more evident of the change than customers actively redirecting their spending from international opportunities toward North America, said the CEO. The shift in capital expenditure allocation “is largely driven by the shorter cycle return and lower risk profile North America shale provides.

“This change didn’t happen overnight. In fact, it’s been occurring over the last several years. In this paradigm, we see sustainable growth over a longer period of time rather than the boom and bust which has characterized past cycles in North America.”

Led by increased activity in the United States land sector, completion and production unit revenue rose year/year by 46% to $3.8 billion, while operating income tripled to $500 million. The drilling and evaluations division also scored a strong year/year performance with revenue rising 15% to $1.9 billion and operating income up 54% at $188 million.

Income from continuing operations was $46 million (5 cents/share) for 1Q2018 versus a year-ago loss of $32 million (minus 4 cents). Adjusted income, excluding impairments and other charges related to a writedown of all remaining investments in Venezuela, was $358 million (41 cents/share) compared with $34 million (4 cents) in 1Q2017. Operating income was $354 million, up from 1Q2017’s $203 million.