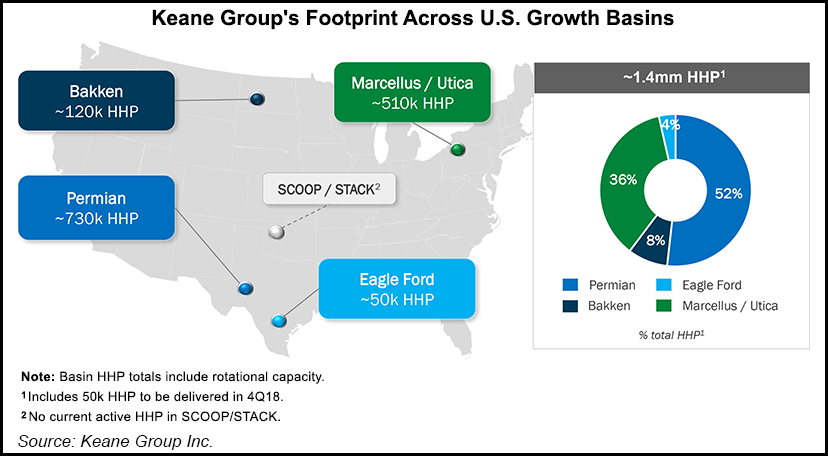 The oilfield services (OFS) operators, both based in Houston, each acknowledged at the Barclays CEO Energy-Power Brokers Conference in New York City that activity has been lower than predicted in 3Q2018. Halliburton CEO Jeff Miller presented at the conference, while Keane’s management team provided its outlook to investors.

Miller, who leads the No. 1 pressure pumping provider in North America, said the macro supply and demand outlook “is the best it has been in four years…Global demand for hydrocarbons is solid,” with the International Monetary Fund’s global gross domestic product growth outlook at 3.9% for 2019.

However, he repeated what he said during a second quarter conference call about near-term issues impacting North America, which include a shortage of pipeline takeaway capacity, particularly in the Permian Basin, along with rising inflation, labor shortages and logistics issues to get equipment where it needs to be.

The short-term has challenges, Miller said.

“For example, regarding pipeline takeaway in the Permian Basin, some operators will reallocate capital to other basins, some will slow down, others will build DUCs,” aka drilled but uncompleted wells. In Appalachia, producers exhausted their 2018 budgets early, “followed by a reevaluation…Some customers are choosing to do more work while others decided to stop or slow down.”

Miller noted he had predicted a downturn in activity because of budget constraints and takeaway capacity issues.

“There has been, and it’s more than we expected,” he told the audience. “We said there would be a decrease in customer urgency that may result in more white space in our calendar. That has occurred, and we have more white space than expected.”

The decrease in “customer urgency” has led to pricing pressure, and “we now see weakness in pricing in several basins.”

Combined with project delays in the Middle East, Halliburton expects to take a hit to 3Q2018 earnings of 8-10 cents/share.

The pullback in onshore activity today is a “response to either budget exhaustion,” or “in some cases, budget exhaustion along with takeaway capacity,” and some operators are “reallocating capital somewhere else, which creates disruption,” Miller said.

In some cases, Halliburton has had customers that have said, “we’ll get back to you,” he said.

“These are very good customers, the customers we’re aligned with…Customers who say, ”We want you back, but we want you back in January, or we were going to work another month and then we’ll see you in January.”

The reduction in activity began to emerge in the spring. “When I described the ramifications of what we were seeing, it was clear that there would be reallocation of budgets, there would be thoughts around what pace given the differentials and takeaway, but never a question about customers’ determination to grow their business in North America. It’s a question of that timing,” said Miller.

“What hasn’t changed for the long-term is the service intensity of wells…There is still demand for our services.” Because there are more stages in onshore wells, fracture intensity “will continue to wear down equipment and cause a healthy level of attrition. This, combined with reduced equipment adds, will help balance the market in the coming quarters.”

Next year, activity in North America should rebound as budgets are reloaded, hedges roll off, pipelines are built and the DUC inventory is worked down.

“I want to be clear, this does not change my view on 2019,” Miller said. “The outlook for both North America and the international market is positive. We will successfully manage through these near-term issues…This is not the first time we worked in an evolving market. We know how to compete in it…”

Beyond short-term challenges, “there is nothing but a strong glide path in North America that’s upwards, almost any way we look at it over the long-term, and that kicks in ’19 in a bigger way,” Miller said.

Many areas of the country should “go straight back to work in January very quickly…Feedback I have from customers is they plan to get rolling early in the year. So, it’s not that we wait until the end of ’19 to pick up activity.”

Operators that can reallocate their capital to other basins in certain cases will, but most of the market won’t. “I think we will see activity improve sooner rather than later in the year relative to pipeline activation.”

For Keane, which has 1.4 million hydraulic hp in its fleet, long-term customer relationships and dedicated agreements “remain strong and intact,” the management team told investors at the Barclays conference. It did not make a separate presentation.

Even with a slowdown in activity, there has been “no customer turnover” and so far, there’s been no pricing pressures.

Keane management is in agreement with Miller that 2019 looks to be strong, but “customer drilling efficiencies appear to be leveling off.” As a result, Keane also has revised its outlook, as the “efficiency dynamic created unanticipated white space on active fleets in the 3Q2018 calendar.”

Keane’s updated forecast was cut to an average of 24 fracture fleets from a previous forecast of 27. Keane mostly works in the Permian and Appalachian basins. The total 3Q2018 revenue outlook has been reduced to $545-555 million from a previous estimate of $565-590 million.

Keane also is working with customers “to address constraints and improve overall efficiency.”