Halcon Resources Corp. agreed to sell its remaining nonoperated assets in the Williston Basin to an undisclosed buyer for $104 million, completing the company’s nine-month transformation into a Permian Basin pure-play operator. 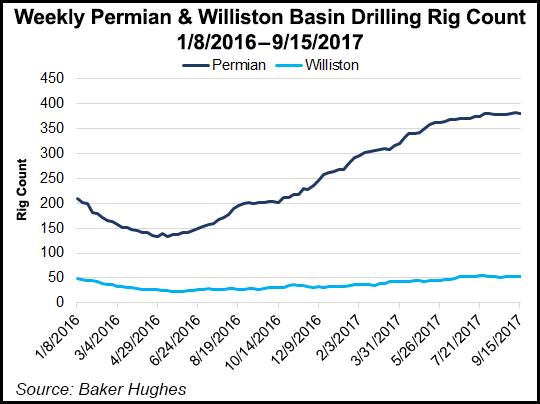 Houston-based Halcon said Wednesday the transaction, subject to customary closing conditions and adjustments, should be completed within two months; it has an effective date of April 1. The properties being sold are producing about 1,891 b/d of oil, 1,931 Mcf/d of natural gas and 65 b/d of natural gas liquids.

Halcon plans to use proceeds from the sale to reduce its senior secured revolving credit facility to $100 million.

Last July, Halcon agreed to sell its operated assets in the Williston for $1.4 billion to an affiliate of Bruin E&P Partners, a portfolio company of private equity giant Arclight Capital Partners. That deal closed in early September as Halcon launched a tender offer for up to half of its 6.75% senior notes due in 2025.

Halcon agreed in January to sell its El Halcon acreage in the Upper Eagle Ford Shale in East Texas to an undisclosed buyer for $500 million. At the same time, it paid an undisclosed seller $705 million for 20,748 net acres in the Delaware sub-basin in the West Texas counties of Pecos and Reeves. Five months later, Halcon exercised an option to acquire an additional 6,720 net acres in Ward County, TX, for $11,000/acre. That deal followed another for 3,634 net acres in Pecos County from an undisclosed seller for $88 million.

“In less than nine months, the company has sold approximately 2,000 wellbores across its legacy assets for aggregate cash proceeds in excess of $2 billion,” Halcon said Wednesday. With more than 41,500 net acres “in the core of the Delaware and strong liquidity, Halcon is well positioned for significant growth going forward.”