Gulfport Energy Corp. said Monday the second quarter was its most active in the Utica Shale since entering the play in 2011, after the company turned to sales 26.7 net operated wells. 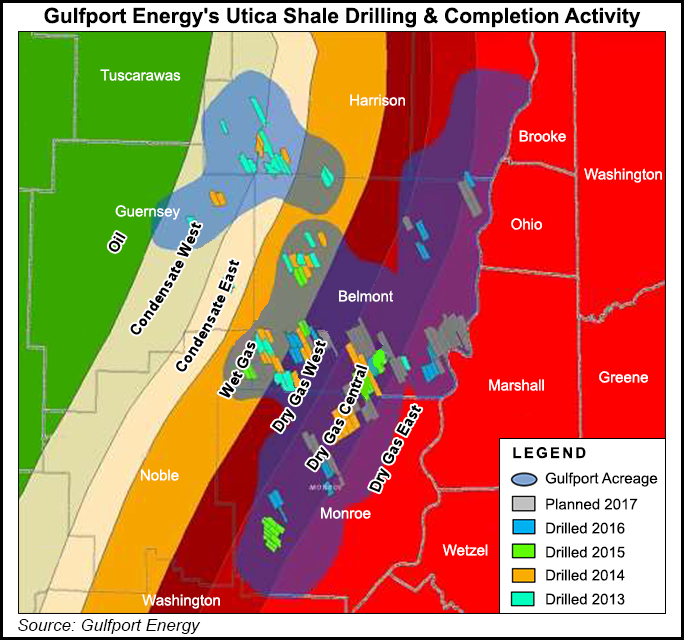 Combined with the progress Gulfport made in the South Central Oklahoma Oil Province (SCOOP) during the period, the company again beat Wall Street consensus, reporting 1.038 Bcfe/d of production for the second quarter. The daily production mix consisted of 88% natural gas, 8% natural gas liquids (NGL) and 4% oil. Second quarter production was up 22% from 1Q2017, when the company beat guidance, and 56% from the year-ago period.

Given its results through the first six months of the year, Gulfport slightly increased the low end of its 2017 production guidance, to 1.065 Bcfe/d from 1.045; the high end was unchanged at 1.1 Bcfe/d. That would imply up to 53% year/year production growth from the 719.8 MMcfe/d the company produced in 2016.

The company acquired the acreage from Vitruvian II Woodford LLC. Its first operated Woodford wells in Grady County, which were drilled by Vitruvian, have produced mostly natural gas. The Vinson 2 has produced at an average 60-day peak rate of 14.4 MMcfe/d, consisting of 79% gas, 19% NGLs and 2% oil. The Vinson 3R has produced at an average 60-day rate of 17.3 MMcfe/d with the same production ratio.

Gulfport is scheduled to report second quarter results next week.