Bankrupt Gulfport Energy Corp. has accused Cheniere Energy Inc.’s Midship Pipeline subsidiary of illegally seizing $75.6 million to hold it “hostage” during contract renegotiations in anticipation of the Chapter 11 filing, according to court filings. 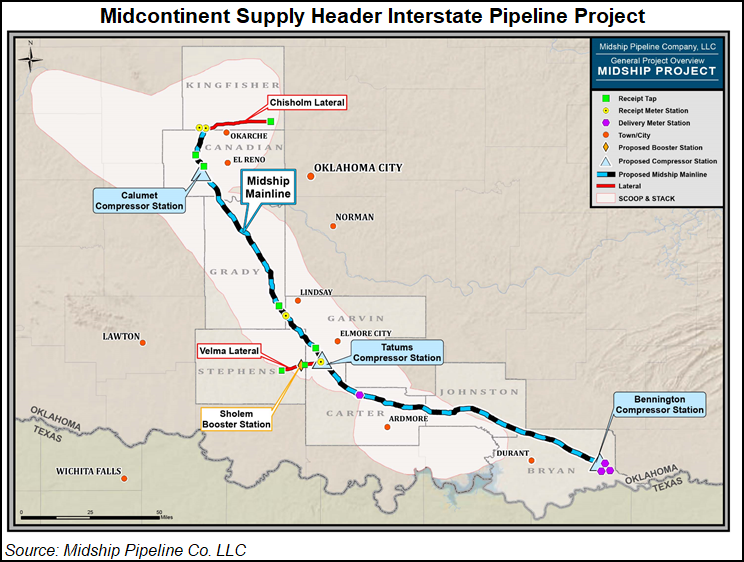 “To obtain leverage in ongoing contract negotiations and secure an advantageous cash position prior to Gulfport’s bankruptcy, Midship made false statements to Scotia Bank and wrongfully drew $75.6 million” from the letter of credit, Gulfport said in a complaint earlier this month to the U.S. Bankruptcy Court for the Southern District of Texas in Houston.

Gulfport asked the court to order Midship to pay $75.6 million plus exemplary damages for its “egregious and commercially unreasonable” conduct.

Oklahoma City-based Gulfport in mid-November filed for bankruptcy protection, joining many other Lower 48 exploration and production companies that have succumbed this year to low commodity prices exacerbated by the Covid-19 pandemic.

Gulfport is a major player in Ohio’s Utica Shale, where it holds more than 200,000 net acres and produces about 1 Bcfe/d of oil and gas. The company in 2017 spent $1.85 billion on a deal that closed in 2017 to enter the South Central Oklahoma Oil Province, aka the SCOOP.

Gulfport in March 2017 signed a 10-year deal for at least 175,000 Dth/d of firm transportation service on Midship, the first pipeline that Cheniere developed not directly linked to its liquefied natural gas export terminals.

The 200-mile Midship system in Oklahoma was placed in service in April, about a year after it was originally scheduled. The 1.44 Bcf/d line moves gas from the SCOOP and the Sooner Trend of the Anadarko Basin, mostly in Canadian and Kingfisher counties (STACK).

Gulfport and Midship amended their agreement four times to alter minimum volumes and address construction delays, according to the court filing.

Gulfport paid Midship about $11.9 million for shipping about 24.3 MMDth through September.

The most recent amendment signed in June was partly designed to help Gulfport address its financial crunch. Gulfport in late September provided Midship a $32.9 million payment and was scheduled to secure a $34 million bond by Oct. 1, which would have allowed Gulfport to reduce its letter of credit to $12.2 million from $75.6 million.

The fourth amendment signed in June limited the funds that Midship could draw against the letter of credit to “amounts that are due and owed” by Gulfport, the filing added.

While the terms of the fourth amendment were being completed, Midship and Gulfport began negotiating a fifth amendment in mid-September because Gulfport wanted to adjust its volume commitments and increase its liquidity.

“Throughout these negotiations, Midship knew that Gulfport was in financial distress,” as in September Midship asked FERC to affirm it would have concurrent jurisdiction with the bankruptcy court over potentially nullifying the 10-year transportation agreement.

Gulfport executives communicated “multiple times each day” in the last days of September regarding completion of terms of the fourth amendment, the complaint noted.

On Oct. 1 Gulfport obtained a draft surety bond that was being finalized into an acceptable form. On Oct. 2, “without any warning or notice to Gulfport,” Midship initiated with Scotia Bank a draw on the entire $75.6 million letter of credit to allegedly satisfy debt owed by Gulfport, the complaint said.

“That representation was false,” the complaint said. “Gulfport did not owe Midship any funds at that time — much less the $75.6 million Midship requested in its draw demand.”

Midship officials contend in the filing that the failure to provide the $34 million bond by Oct. 1 resulted in a breach of contract that allowed for the draw demand.

Midship “immediately used its new leverage to demand more advantageous terms in negotiating a potential fifth amendment to the agreement, suggesting that the draw dispute could be resolved if Gulfport would agree to Midship’s proposed terms,” the complaint said. Manteris then told Hicks on Oct. 5 that he was unable to convince Midship’s lenders to back off the draw demand, the filing said.

Midship “has never explained” why the slight delay in securing the bond constituted any debt owed by Gulfport, much the less the large amount of $75.6 million, the complaint said.